Wouldn’t it be nice if the rest of country had to pander to your preferences and strive to avoid upsetting you in any way? The simple, one-word answer to that is “no.” If everyone who’s different from you were forced to go out of his or her way in order not to offend you, the county would be a miserable place.

Right now, the country is a miserable place.

In fact, the miserable institutions in America that have force-fed this type of race-based division, our colleges and universities, logically are to blame for much of the racial unrest we have in the country.

The media puts the blame on police and white supremacists, but the media is delusional. The police have some bad apples that could be removed, and there aren’t enough white supremacists to make any difference. It’s our colleges and universities that work to divide us.

The Texas Tribune, a mostly left-wing internet newspaper, has a story about Texas State University (still remembered as Southwest Texas State) making a decision to “pause” its employee diversity training. Now why would a committed left-wing college with a left-wing president (Denise Trauth) obey an executive order from President Trump to stop the indoctrination? The college doesn’t want to lose federal funding, that’s why.

President Trauth explained that Southwest Texas State – sorry, Texas State – receives federal dollars from “scores of federal grants.” That should be in all caps:

Let that sink in.

From this article, it appears that the employees of Texas State are subjected to the diversity propaganda and then the students in turn get it from professors. One supposes that ALL employees must attend from custodial workers to administrators. In the world of academics, if you’re not a victim, then you’re a racist. No jury. No judge. You’re simply guilty and you must be assimilated into the left-wing way of thinking.

If you think this is harmless, look at inner cities that have burned from Portland to Seattle to Kenosha, Wisconsin. Count up the dead in all the protests that followed the tragic incident in which George Floyd lost his life in Minneapolis.

While you’re at it, read Floyd’s autopsy report. Floyd was no saint, and his case reminds us that simply not resisting arrest would have defused most of these incidents before they turned into tragedies for the perpetrator and the police. 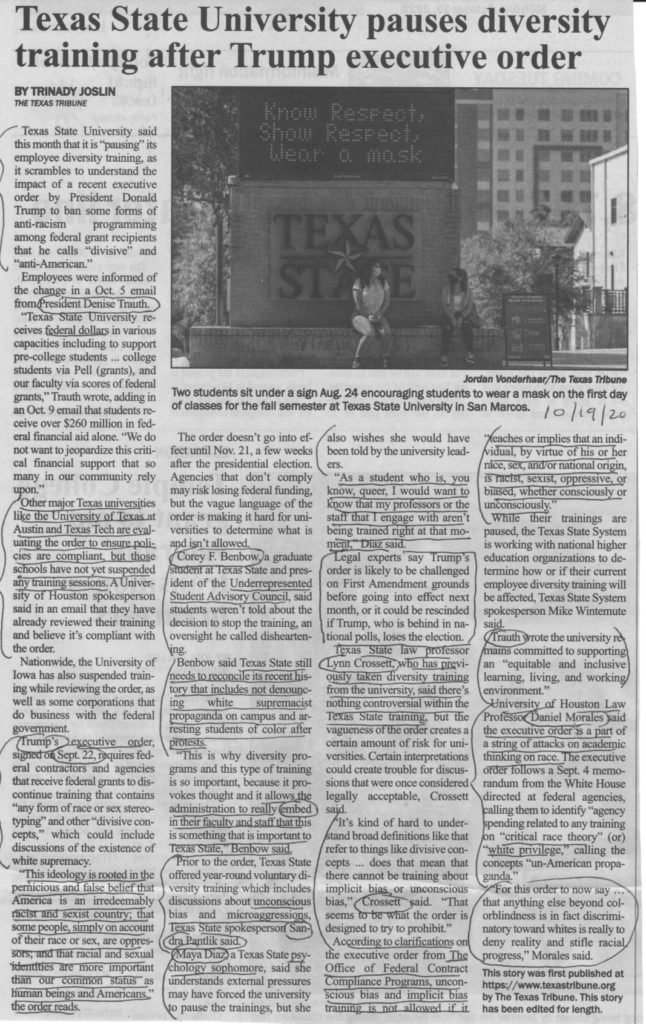 But to colleges, it is all about racism and white privilege.

And so they demand the right to “train” their employees and indoctrinate their students, apparently using trainers and professors who are perfect in their knowledge of how America ought to be. In all cases, they know best.

I have hoped and prayed for something to enter our lives that could stop this. It did. President Donald Trump finally got enough of it, and issued an executive order. For the record, I don’t care for executive orders because only Congress (and Chief Justice Roberts) has the ability to make law. But put that aside for a moment.

The Congress, even if it were right-wing, would never pass such a law.

The zeitgeist right now demands that all white males are racists and probably sexual predators as well.

In case you haven’t noticed, the Democratic Party is a cobbled-together organization of grievance-based constituencies and cannot disagree with any of them lest they lose support for their candidates. The Democrats are locked into all kinds of illogical positions because of that to include abortion on demand, climate change nonsense, and the denial of gender. The Party is a total loss when it comes to logic or the willingness to make commonsense decisions.

As for the Republicans, they are mostly do-nothing cowards.

This is why I celebrate Donald Trump – not for his style – but for his courage.

President Trump simply looked at the diversity on campus including all the indoctrination and the “Departments of Inclusion” that are so trendy right now and said – ENOUGH! All of this intellectual garbage has led to so much heartache – violent protests, looting, rioting, shootings, loss of businesses, and the destruction of priceless artifacts. It has to stop or our country can’t survive. This is worse than the pandemic. So Trump acted.

The order contained this language…

“This ideology is rooted in the pernicious and false belief that America is an irredeemable racist and sexist country; that some people, simply on account of their race or sex, are oppressors; and that racial and sexual identities are more important than our common status as human beings and Americans.”

It’s about time that someone stood up to the race-baiters that run our higher education system. That someone had to be Donald Trump.

Who else would take such a political chance? Certainly not Texas Governor Greg Abbott who appoints members to state Boards of Regents. He and most other politicians are silent on this issue. And this is why I love Donald Trump. He sees a problem; he fixes it.

Meanwhile there is much gnashing of teeth on college campi!

According to the Texas Tribune, colleges have taken a “what can we do”
stance – putting these training sessions on hold to protect their federal grants. That’s what Texas State has done while the University of Texas and Texas Tech are continuing the training but attempting to ensure compliance with Trump’s order. The University of Houston says its training program is just fine and is continuing with it. For God’s sake, folks, the indoctrination must go on!

Already indoctrinated students are upset at Texas State. The Texas Tribune quotes Corey F. Benbow, a graduate student and president of something called “The Underrepresented Student Advisory Council” as being upset that Texas State will not be able to reconcile its recent [racist] history that includes not denouncing white supremacist propaganda on campus, and arresting “students of color” after protests.

One wonders how violent a “student of color” had to be in order to be arrested on a wildly left-wing campus such as Texas State. Benbow apparently wants diversity training to be embedded in the faculty – as if it isn’t.

Another student, who is “queer” named Maya Diaz wished she would [sic] have been told about this by the University.

“As a student who is you know queer, I would want to know that my professors or the staff that I engage with aren’t being trained right at that moment.”

How self-righteous and self-serving can college students be? These two, and likely many more, want the staff and faculty to be indoctrinated to their particular point of view to the exclusion of mine or yours. If I were in charge, they could go pound sand.

I’m a white male, and yet I can’t sink a basket like Beijing LeBron can. I can’t operate on a child’s brain or do complex medical procedures like Ben Carson can. I can’t throw a football like Dak Prescott. I can’t serve in Congress like Tim Scott. I don’t have a national radio show like Larry Elder. I’ve never run a national fast-food chain like Herman Cain.  I’m not a space hero like Ronald McNair. I’ll never be on a national ticket like Kamala Harris. I’ll never be Attorney General like Eric Holder or Loretta Lynch. I’ll never be president like Barack Obama.

I put my pants on each morning and struggle to survive in a mixed-up, muddled-up, shook up world (except for Lola). My white privilege pales (pun intended) to the advantages that are handed on a platter to virtually everyone except white males through diversity training.

President Trump has shown us how to end this divisive mess.

It’s easier than I thought to reform our race-based, left-wing colleges and universities. Cut off their damn money.

Remember that line from Texas State:

If conservative politicians hit colleges where it hurts – their bank accounts – we could end all of this race baiting almost overnight. But only Donald Trump has the jewels to do it.

Only Trump sees the divisive damage that colleges are doing to our cities and to our entire nation. I may not care for executive orders, but this one sure beats anything Obama did with his pen and phone. This one could save us from ourselves.

Colleges, of course, are waiting until November 3rd to see if Trump is reelected. If Biden and Harris get in, then they can go right back to their racial and sexual indoctrination programs – and we may eventually lose all unity.   But we can stop it. We know how to stop it.

Donald Trump has shown us the way.