The subject of this column rose from something the Grandson Of Logic said to me some weeks ago. Paraphrased, this twenty-year old said:

“I’m enjoying President Trump while I can because I’ll probably never see another president like him.”

That stuck in my mind.

Why would anyone say such a thing about such a divisive president?

To answer that question, you have to consider precisely why President Trump is considered “divisive.”

I’ll state it as succinctly as I can:

Virtually all politicians and bureaucrats of the Left and many on the Right and most of the Mainstream Media despise Trump because he upsets the natural order of things in Washington.

Trump is like no other president in our generation.

From Bush to Clinton to Bush to Obama, two Republicans and two Democrats, was there ever really much difference? The answer is no. Both Bushes were part of the Swamp, Clinton was perhaps our most corrupt president but was protected by his party and by the media, and Obama was the virtual personification of the Swamp.

That broken pledge, and the candidacy of H. Ross Perot doomed his reelection bid.

Clinton was labeled “an unusually good liar” by Sen. Bob Kerrey of his own party, and proceeded to lie and cover up one scandal after another. Remember this jewel?

“I did not have sex with that woman, Miss Lewinsky.”

The Clinton list of scandals is too long for any one column, but we’ll mention just a few: being serviced in the Oval Office by Monica Lewinsky and lying about it; his shady dealings with Asian “fund-raisers” that always seemed to be prowling in the White House; and the selling of pardons as he and Hillary departed from office.

George W. Bush was a cult-like figure as he entered the Oval Office, and I was part of the cult, thinking he could do no wrong.   He could and did. He will go down in history for sending us into forever wars – at least one of which was predicated on false pretenses.

Less than a week after 9/11, he told us that Islam is peace:

“The face of terror is not the true faith of Islam. That’s not what Islam is all about. Islam is peace. These terrorists don’t represent peace. They represent evil and war.”

The ruins of the World Trade center were still smoldering.   It is true that the terrorists did not represent all Muslims, but Bush failed to recognize the evil that is committed in the name of Islam. Many Americans scratched their heads over his speech wondering where he was coming from.

George W. Bush also was a standard inside-the-Beltway politician on issues like immigration and abortion. As a conservative, he was a pretender. He will go down in history among our worst presidents.

Barack H. Obama was a travesty.

He didn’t seem to care much for America or Israel. He attended a racist, anti-American church and listened to the lunatic ravings of a racist pastor for many years. His administration was scandal-ridden from Fast & Furious to Benghazi, to the weaponizing of the Internal Revenue Service and the Justice Department to the overt and covert attempts to prevent Donald Trump from becoming president.

His worst and possibly most illegal act while in office was the deal he made with Iran that provided the Ayatollahs with billions in cash and allowed them to clandestinely continue their nuclear program.

Obama was consumed with race, and didn’t mind showing it when he said:

The Cambridge Police were trying to protect a black professor’s house when they thought it was being violated.

But Obama always thought the worst of people in racially charged situations.

Then came President Donald Trump and he was nothing like them. 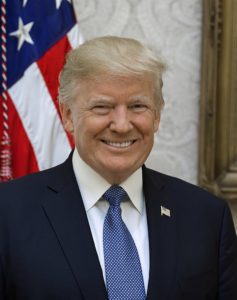 Donald John Trump, at his core, is a problem solver.

He has never understood, nor liked the Washington way of letting problems fester for years with nothing ever being done. There’s a famous old story about a skating rink in New York City that the local government couldn’t get done. But Trump got it done.

The rink became a symbol of how government slugs along like molasses while Trump simply cut through the red tape.

There will never be another like him. Ronald Reagan was the greatest president of my lifetime, and yet Trump has accomplished things even Ronaldus Maxiumus was unable to do – immigration is but one example.

Perhaps more than any other leader since Reagan, Donald Trump LOVES THIS COUNTRY. His slogan…

…is the greatest political slogan ever, thrilling those who love the country and agitating those who think America was never great (as we have heard from many Black Lives Matter members and Gov. Cuomo.).

So-called journalists at CNN, MSNBC, the New York Times, the Washington Post, and the Associated Press have been exposed as America-haters as they accuse Trump of being an over-the-top nationalist or xenophobic. Some pro-American nationalism is much needed in our country, in my opinion.

Trump, like Reagan, is an optimist. Reagan’s famous campaign slogan…

…inspired me and millions of others. Ronald Reagan made America great whether BLM likes it or not.

But under the crushing incoherence of the Swamp and political corruption from politicians whose own self-interests always took precedence (Harry Reid, Bill and Hillary Clinton, Randy “Duke” Cunningham, “Dollar” Bill Jefferson, and so on), America lapsed into a political malaise where nothing could get done.

When Obama came along, he was our most race-based and identity-conscious president ever. He told us America is NOT a Christian nation, and how peaceful Islam is, and how stupid police are, and his first attorney general told us that we were all cowards about race.

We’re seeing some of that transformation now in the streets of our cities as BLM and Antifa anarchists use lies about police-involved shootings to force the type of political change they demand. If Joe Biden and Kamala Harris are elected, they will get what they want and America as we knew it will have died after just 245 years.

Be glad we have Donald Trump. Be VERY glad.

If Joe Biden, Kamala Harris, or any number of other Democrats or Republicans becomes president – and they will at some point – it will be back to politics as usual. That means the country comes last and the goals of a single politician (usually reelection), the Swamp (keeping the status quo forever), and a political party (power) will once again be paramount.

Riots would continue under a Biden/Harris administration because they have worked – and the more they work, the more we will get. If Trump is reelected, he will take a mandate to stop the riots and restore peace. Under Trump’s second term CNN’s “peaceful protests” had better be peaceful, or heads will roll. As they should.

Donald Trump is what is standing between the country and Marxism.

He has made America far greater than it was under Bush or Obama and he has accomplished it without much help from either party. Just as Ronald Reagan was one-of-a-kind and was able to make Americans proud again after the Jimmy Carter debacle, so is Donald Trump the right president for our times.

Biden sees Black Lives Matter as his constituents. Trump sees them as enemies of the State – seditionists.

Every word that comes from Biden’s mouth is controlled (to the extent possible) by his handlers and the TelePromTer. Trump says what he thinks and is not subject to focus groups.

Biden will do or say what the polling tells him to. He will roll with the zeitgeist of the day. Trump relies on his instincts, his common sense, and his logic. He is a problem solver. He wants to get things done and he does not want politics to get in the way.

He has restored America to greatness, and in the wake of a world pandemic, he is the only leader who can do it again. Biden is a corrupt politician who will do whatever is necessary to maintain power for his party. Trump is a patriot who wants his legacy to be a free and prosperous America – the greatest country in the world.

We have Trump now, but we won’t have him much longer even if he gets reelected.

Please understand what we have and cherish it whether it’s just a few more weeks, or another full term. A President who loves his country more than himself and who works to make it great and keep it that way is a special gift.

The Grandson of Logic made a great point.

Enjoy President Trump while you can, because you’ll probably never see another president like him.