What would life in America be like under President Kamala Harris

Face it. The upcoming presidential election is not a choice between Donald Trump and Joe Biden.

It’s between Trump and Kamala Devi Harris. Biden is 78 now. He would be 82 at the end of his first administration. Does an 82-year-old man run again, or does he hand the nomination to his rightful successor – in this case, Ms. Harris whose pronouns are she, her, and hers.

It’s time to stop examining the record and rhetoric of Joe Biden. Even if he wins, he will be president for a very short while – perhaps just a few months. The person we need to look into is Kamala Harris.

My bottom line is whether the country is better off with Trump or Harris as president.

I see Trump as a developer who wanted to do business in Russia and therefore worked with the Russians to accomplish his goals including building a Trump Tower in Moscow. He’s not the only rich businessman or corporation to expand to other countries.

The National Basketball Association (with its chief CCP apologist LeBron James) will do anything or say anything to appease the Communist Chinese. The Clintons were big in Russia with Bill hauling in $500,000 for a speech in Moscow and Hillary approving the Uranium One deal.   We all know of Hunter Biden’s shady business deals in Ukraine and China. 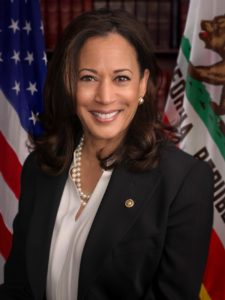 So, can we put that aside and look at which candidate – Trump or Harris – is better for the United States?

Biden is irrelevant. This is a race between Trump and Harris.

If Trump is elected, he will still be Trump and he will tweet, but the economy will rebound. The Stock market will soar as the virus abates.

If Trump is reelected, the country will fundamentally be the same — just without a few statues. He will absolutely take on Black Lives Matter and Antifa.

But if Harris becomes president, we will have reparations for slavery, gender and identity politics, more funding to Planned Parenthood and therefore the abortion genocide in the black community will continue.

Video:  June 27, 2019, Harris implicitly says biden is a racist because of his stance on busing.

Cancel culture will chip away at all traditional American institutions and our very heritage.

Christopher Columbus has already been deemed politically incorrect and his statues are being toppled. Under President Harris, we could lose the Washington Monument, the Lincoln Memorial, the Jefferson Memorial, Mount Rushmore could be destroyed or altered, and even the White House might be torn down and rebuilt.

(Michelle Obama is said to have been “uncomfortable” living there because of slave labor that built it.)

Under President Harris, America will be fully punished for all its past sins that can NEVER be forgotten.

She is on record as supporting reparations for slavery, even though no one alive today in this country has ever been a slave or owned a slave. Under Harris, our Founders will be smeared as racists, our textbooks will be rewritten, and our left-wing universities will become more extreme.

Video:  Harris will “explore” the issue of reparations if she becomes president.

It’s likely that the next four years will carry with it a couple of of Supreme Court vacancies.   It hurts to think about the type of nominee we’d get from President Harris. This woman, who brutally attacked nominee (and now Justice) Brett Kavanaugh without evidence would likely give us far-left nominees that would support an anti-constitutional agenda.

Harris will usher in a Constitution-free era.

There is nothing she and the Democrats won’t do to preserve power for the Left and destroy the Republican Party forever. Among those things:

These are all things that have been discussed by the Left. Any one of them would likely destroy the Republican Party. That is their goal: perpetual one-party rule. (And we’ve seen how Democratic governance has worked out in hellhole states like California, Illinois, and New York. All of them are bankrupt and looking to conservative states for a bailout.)

What else could go wrong? Everything.

The economy very well might collapse under the burden of the multi-trillion-dollar Green New Deal, reparations, higher taxes, free healthcare, free college, and housing and big-screen TV’s as a right.

“All minorities got Obama Phone.”

Video:  Free phones from Obama.  What will Harris give away?  What will all this free stuff do to the country?

China will run rampant and do as it pleases without a worry in the world.

With Trump in office, we’ll have four more years of a vibrant economy and then we’ll return to old-style politics with career bureaucrats running for office as they always do. Trump has taken on China – but it’s doubtful that Harris will. She’s a social justice warrior, and that where her attention will be focused.

With Harris as president, we’ll go radical left and the economy will crater. Democrats, as we see in cities like Chicago and states like California, will double down on stupidity, and make it worse. Cities like Austin will continue to defund the police and will descend into chaos. Criminals will flood the streets as we’ve already seen in Portland, Seattle, and New York.

Obama constantly told us that America’s best days were behind us. The “new normal” would be a shared misery, and our children would not enjoy a better life than we did. Trump proved him wrong. Harris would take us back to that “new normal.”

Left-wing policies simply do not work in a free economy – and that may well be the point. Democrats don’t want a free economy. They want total government control.

Get ready to be miserable except for the political elites who will never be affected or even doxxed inside their locked and gated communities.

The media will lie to us so that we won’t remember the best economy in the world that Trump gave us, and that was only damaged by a worldwide pandemic. They blamed that on Trump, too, and let the nation’s worst governor, New York’s Andrew Cuomo, off the hook although his mistakes cost thousands of lives.

The Left is going to advocate for a dystopian, dismal future.

There’s something about “equality” that makes the Left want to downsize our economy, and make us all less than we can be. Equality and its partner-in-crime, “diversity,” are twin forces that hold us back, prevent us from using our talents, and keep us from reaching our potential as human beings.

I keep thinking that if the NBA really subscribed to equality and diversity, I could be on a team with LeBron. We could win, too! ALL the other teams would also be forced to sign older, white, fat, short players. Equality and diversity would demand it. The NBA does not practice what it preaches.

I think a Kamala Harris administration would just about end the country as we know it. I like our country. I think our Founding Fathers and Mothers, our Constitution, and our devotion to freedom paved the way for America to become the greatest nation ever – exceptional – and diverse by nature instead of by government mandate. LeBron James and Oprah Winfrey became rich HERE – not in Africa.

President Trump is a non-traditional leader. He is not a career politician like Biden and Kamala. He is off the beaten path. We may never see another POTUS like him. He has made America great again. In spite of the cornonavirus, he can do it again.

You know what Kamala Harris wants to do. You know what Trump has already accomplished. The choice this election is no choice at all.