Temple, Texas School District not taking “no” for an answer with failure of Bond Issue

Editor’s note: This story is about my hometown school district in Temple, Texas, population: 80,000. The questions asked here may apply to school districts throughout the country.

“No” apparently is not the right answer to the Temple School Bond.

We just turned one down, and mere weeks later, we have another one to deal with. The first time around, TISD asked for $184.9 million not including interest. This time, it’s “scaled down” to $164.8 million. 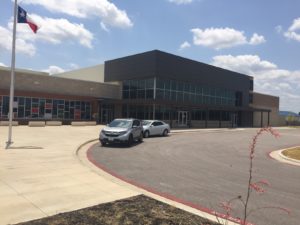 I am not against bond issues in general. But in my doting years, I ask more questions. Here are some of them:

Will TISD keep holding bond elections until we finally pass one?

TISD is obsessed with the age of buildings.

There is nothing inherently wrong with old buildings. The U.S. and Texas capitols are quite old. So is the White House, the Bell County Courthouse and Temple’s city hall.

What is wrong with the use of portable buildings to save money in a time of rampant inflation?

I suspect many of TISD’s board members are financially secure. Most of the city’s population has to worry about Joe Biden’s economic policies that have added so much to the cost of gasoline, food, and everything else. This seems like a terrible time to raise taxes. So why would we? 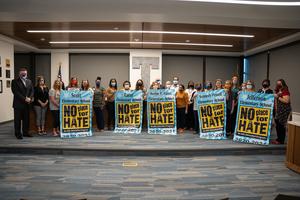 As in Loudon County, Virginia, I do not want racism taught in my schools.

I want to know whether TISD has a Diversity Director. If so, please state who is the Unity Director? Let me be clear: I will not vote for a bond issue for a district that has a DEI director. Neither should you.

I want to know how much debt TISD has from prior bond issues.

If there is remaining debt, it would not be prudent to create still more debt at a time of economic upheaval.

I respectfully ask the TISD to stop promoting the idea that people over 65 with frozen taxes should vote for the bonds because they will not be impacted.

It is immoral to vote to raise your neighbor’s taxes while yours do not go up.

TISD school board president Dan Posey ran an open letter to the community published on page 3 of the Temple Daily Telegram on Sunday, February 20, 2022. 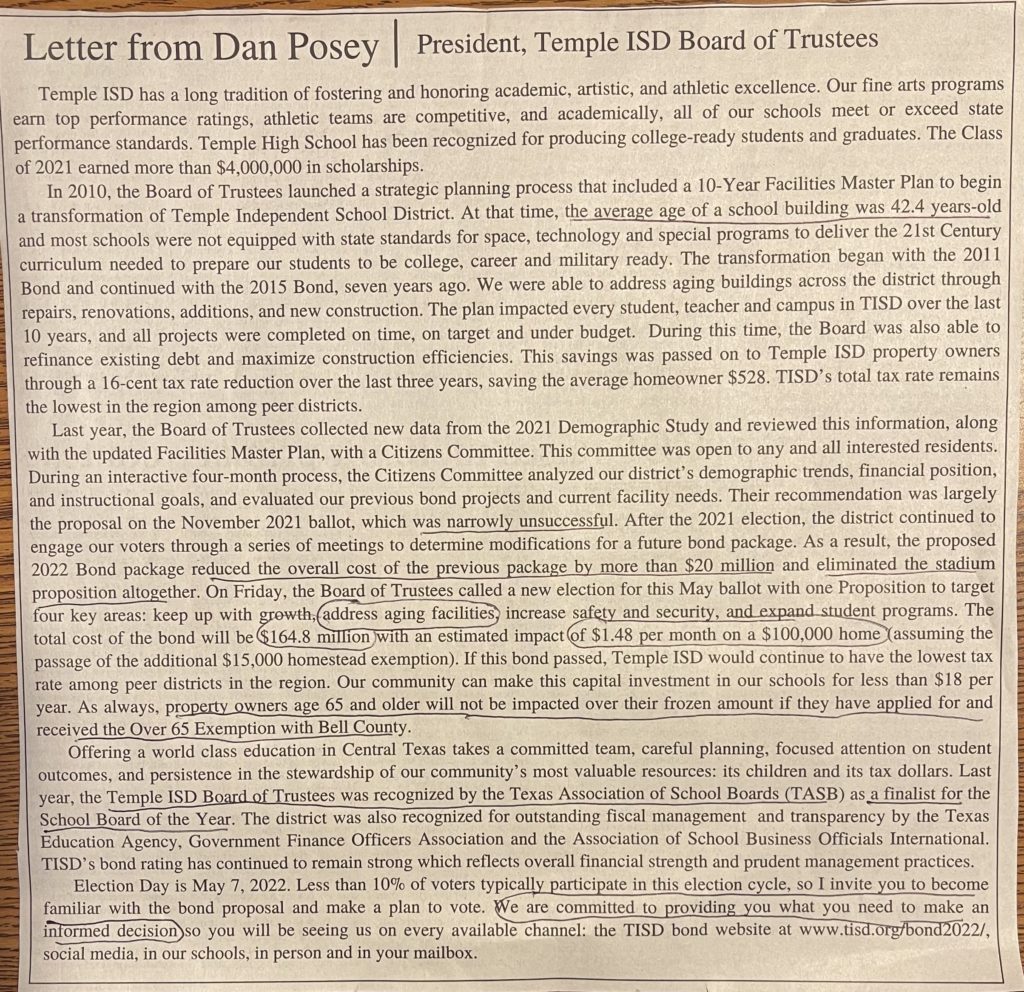 Who paid for this advertisement?

Government entities should never use taxpayer dollars to influence how taxpayers vote.

Mr. Posey mentions the impact on a $100,000 home in Temple should the bonds pass.

Mr. Posey brags that the TISD board was a finalist for School Board of the Year from the Texas Association of School Boards (TASB).

For those who may not know, TASB is a left-wing, anti-parents, anti-taxpayers lobbying organization that advocates for high salaries and golden benefits packages for school superintendents.

It “trains” new board members to always support the superintendent with 100% favorable votes all the time. It has conducted seminars on how to keep parents out of the decision-making process and on how to deal with conservative media. The TASB hands out awards to local media that never ask hard questions in order keep them docile.

How much debt to we have now? Do we really need to raise taxes with Bidenflation running rampant? Does TISD teach racism in our schools?

I want them to teach the basics such as reading, writing, math, science, grammar, and accurate history showing how America became the most exceptional nation ever to exist. I want them to teach civics, citizenship, American exceptionalism, and American values such as the traditional family. They should have mandatory courses on how to save and invest money and not be dependent on government.

And if they don’t do these things, then tax dollars should follow each student and his/her parents to whatever school they think is best. If they choose a private school rather than a government school, then the government schools will get better or they will die.

That’s the way it ought to be.

THIS BOOK CONTAINS NO DIVERSITY, EQUITY OR INCLUSION.