Equity is the new left-wing weasel word that has replaced the concept of excellence. 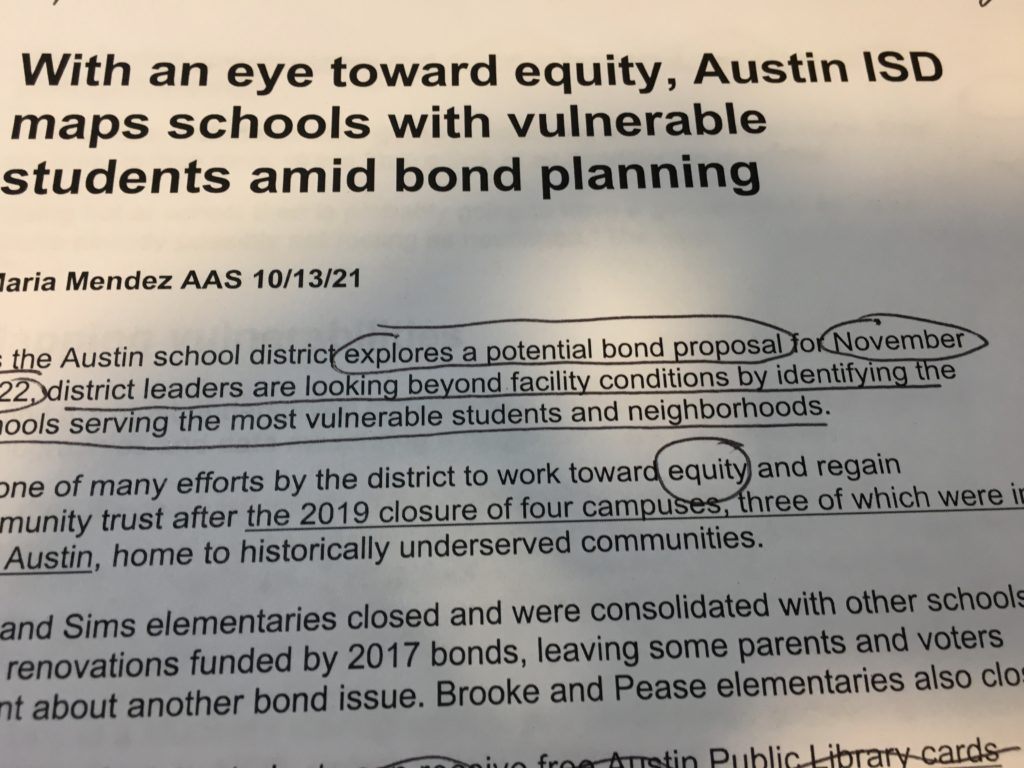 The Austin ISD is concerned with “equity” for its next bond issue. (Photo by Lynn Woolley for WBDaily)

Equity concerns itself with identity issues rather than ideas that would lift all students. For example, instead of concentrating on ethnicity, why not work on the two issues that affect schools the most – lack of fathers and poor English-speaking skills among immigrant children?

Instead, schools concentrate on diminishing those that do well and seem to want equity at the cost of excellence. School boards, meanwhile, are the main problem.

Often rigged by the education establishment, they are mostly rubber stamps for the status quo. If we’re going to fix our schools, we need a better brand of school boards.

What is the most important vote you will ever cast?

The answer to that on a national scale is likely the vote you cast for President of the United States. But at the local level, your school board members affect you far more than the mayor, city council, county commissioners, or even your state and national legislators.

The reason why is simple: school board members have the power to get into the heads of your children without your even knowing it.

The days of reading, writing and arithmetic are over.

Today, schools are concerned with diversity, equity, and inclusion. This is religion for the schools just as climate change is for Democrats and abortion is for radical feminists.

For whatever reason, it’s now trendy in schools that white people are imbued with “white privilege,” that our country is eaten up with “white supremacy,” and that a person’s sex is fluid and can be changed with some chemicals and scalpels.

The people who run our schools know this isn’t true. None of it.

But one strange thing about liberalism is that once something becomes canon, all good liberals must pretend to believe it. The liberal canon now includes DEI and all things LGBTQIA. Perversion and deviance have been normalized.

And since the United States has always been a godly country, then it must be bad too. So our schools have become centers of indoctrination. Things that for centuries were considered bad are now good. And vice versa.

A weird sidebar to this is that when I was in grade school, the worst thing one could be called was “queer.” That was the ultimate fighting word. Now, the worst thing you can be called is ‘racist.” The new scarlet letter is R. The LGBTQIA community worked hard to get us to this point, and with Obama, they had a compliant president.

Soon, all things gay were to be hallowed. All things traditional – not so much.

We change this how?

As we’ve stated in past columns, if you want to get you local school board’s attention, cut off it’s money supply. To do so that you will need to oppose every school bond election until every scintilla of woke culture is gone.

Force them to drop Critical Race Theory, ethnic and gender studies, DEI officers, sensitivity training, gender-neutral bathrooms, all aspects of the LGBTQIA agenda, dual language programs, the 1619 Project, and any other CRT garbage masquerading as something else.

Instead, force them to concentrate on ways to rebuild the traditional family. Fathers who are MIA are not at home to help with homework or to be a role model for boys. Schools have to understand that this is a problem, rather than accepting it and attempting to assume the role of the father. Schools make lousy fathers.

Kids that want to learn a foreign language should have that opportunity, but in math and science, they must speak English.

Consider this tough love: it is not the responsibility of taxpayers to teach immigrant children English. To get into American schools, they should be English proficient. That means countries like Mexico, Guatemala, El Salvador, and Honduras will have to crank up their English classes.

Let’s hire new school boards – but with a twist.

Have you ever wondered why school board votes are almost always unanimous and why they always keep extending the contract of the superintendent?

That’s because the education establishment recruits people to run who are already part of the school establishment and who are sympathetic to the left-wing causes the schools are into. A lot of this is engineered and egged on by the left-wing Texas Association of School Boards – a lobbying organization we should toss out on its collective ass.

Just as the U.S. Military is run by civilians, our schools ought to the run by people outside the education establishment.

Today’s school boards run the schools as they are told by the TASB – and our schools have become indoctrination centers.

We should run concerned parents, church members, businessmen and businesswomen – people who live in the real world where participation trophies are never handed out.

Until we get school boards that will tell the TASB to go to hell and will get our schools back to being centers of education, teaching balanced history and love of country, we will continue the downward spiral.

The schools in your town and the TASB will fight you if you’re not on board with the current left-wing agenda. This is playing out in Loudoun County, Virginia and in other districts throughout the country.

The Left doesn’t care what you think. They care about diversity, equity, and inclusion, and that’s all they care about. Except making you shut up, pay your taxes, and do as they say.

If you want to fight back, run for a seat on the school board.

If enough traditional Americans get elected, the TASB can take a hike over a steep cliff. If you can’t run, then campaign loudly against their bond issues. Deny them the money they want to grow the government schools – until every last shred of anti-American woke-ness is expunged from every school.