Congressional hearts are all a-flutter about the harm that Facebook does to children.

But what about public schools?

Virtually every ISD now has a Diversity Equity and Inclusion officer. Many of them offer junk academics that cater to a certain groups’ grievances, such as black, Hispanic, or gender Studies.

Essentially, our public schools have transmogrified into a delivery system for left-wing, woke thought. At least with Facebook, parents have some control. But we drop our kids off at school in the morning without a thought as to what they might be taught. 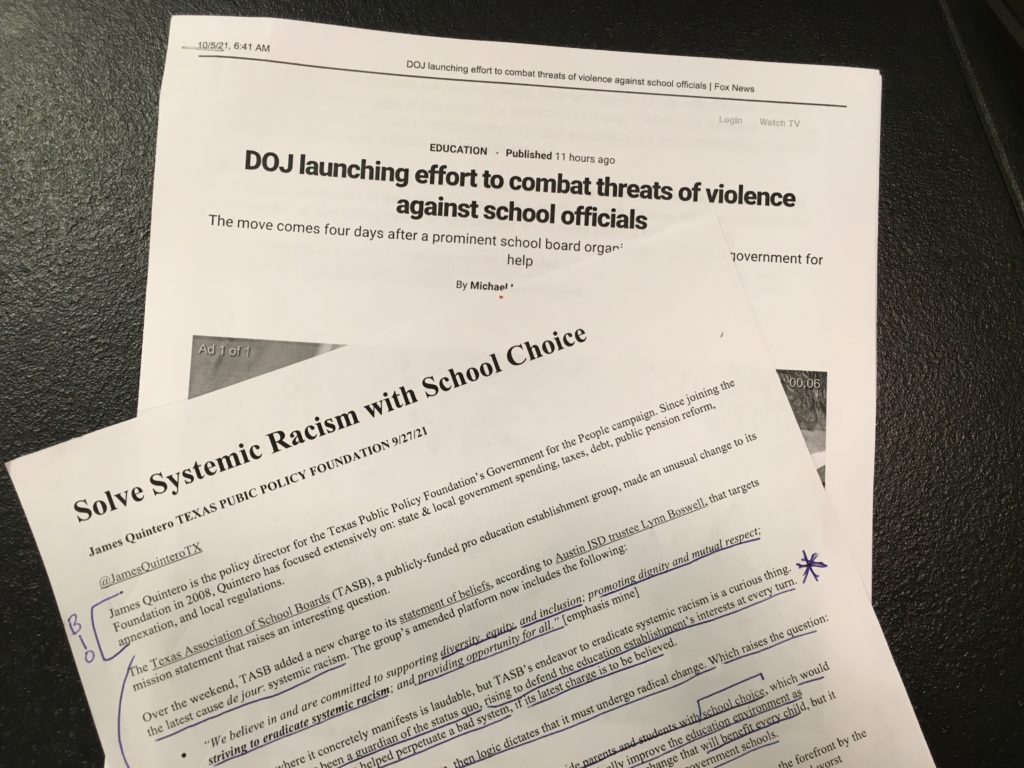 Ask your congressman to push for hearings.

Diversity, so-called equity, and anything race-based that is being taught in our schools helps the Democrats hold their majority. Or at least, that’s how they see it. But keep this in mind, and you may quote me:

Democrats and the education establishment do not want parents to have any control over what their children are being taught in public schools.

Let that roll around in our mind for a while.

In fact, the Department of Justice is launching a new program that is designed to shut up conservative parents in places like Loudoun County, Virginia. It’s under the guise of responding to a so-called increase in threats against teachers. But it will have the effect of shutting down parents who disagree. Conservatives were right to keep Merrick Garland off the Supreme Court.

That’s on a national scale. But things are happening in Texas, too.

The odorous Texas Association of School Boards (TASB) is getting into the business of eradicating systemic racism. If we had a serious problem with systemic racism, I’d be the first on board, but we don’t, and so I’m not.

The TASB has just added some new language to its statement of beliefs. See if this new mission for the TASB is woke enough for you:

“We believe in and are committed to supporting diversity, equity, and inclusion; promoting mutual respect; striving to eradicate systemic racism; and providing opportunity for all.”

The “opportunity” that TASB “strives” for is to make sure school superintendents get big fat paychecks and boatloads of perks based on contract templates supplied to ISDs by the TASB.

Let me be clear:

The TASB pretty much runs your local school board. It trains your school board members and attempts to indoctrinate them into voting 100 percent of the time for what the superintendent wants. It teaches school trustees that there must be no dissent. It attempts to control local media by handing out awards to local reporters who tow the TASB line. (To win the award, simply write glowing articles about local schools with nary a negative comment.)

And, as the new statement of belief plainly states, the TASB is left-wing, pro-status quo (except when it moves to the left), and is hell-bent on indoctrinating your children about “systemic racism.”

If you as a parent or taxpayer attempt to interfere, woe be to you. They just might sic Merrick Garland you. They have no problem with federal meddling in schools just so long as the feds are shutting down any opposing opinions.

As James Quintero of the Texas Public Policy Foundation writes, the TASB is famous for defending the status quo in schools. If the status quo was once racist in nature, then the TASB was there to defend it. That makes the TASB just as racist as the country its trying to smear.

What can you do about left-wing schools?

Tell Merrick Garland to take a hike, and raise some (righteous) hell at school board meetings. Complain loudly when they go into executive session. Rail against all types of ethnic studies. Spend a day with your child in school and see what is being taught. Demand that DEI officials be eliminated at once. Make sure your school supports our flag and our Constitution.

Form groups within your community to act as school watchdogs. Print copies of your superintendent’s contract (it’s an open record) and hand it out at PTA meetings.

And that’s just a start.

If you really want to get their attention, campaign against their bond issues. If you withhold money from them until they dispense with all the divisive wokeness, you will get the change that taxpayers, parents, and students deserve.