Being a school superintendent in Texas is quite profitable, even if you fail.

Texas supers often earn higher wages than the governor, and if they lose their jobs, they float back to Earth on golden parachutes.

According to a study from the University of Texas at Arlington, average salaries range from about $200-thousand to $320-thousand depending on the size of the district. This is far above the national average.

Who’s the top-paid super in Texas? That honor goes to John Henry of the Cypress-Fairbanks ISD who makes $437-thousand as his base pay. Interesting to note that schools in Texas are very woke these days, and these overpaid school superintendents seem content to play the game.

Random Samplings is a service of the Texas Public Policy Foundation.

It’s time the Legislature stepped in to put controls on superintendent salaries.

It won’t. The schools are powerful and have a lobbying organization called the Texas Association of School Boards. The TASB looks out for the wellbeing of school superintendents since many of the people who work at TASB are retired superintendents themselves.

You’ll note that the TASB is often the go-to consultants when school boards pony up big amounts of money to do a superintendent search. These searches are rigged. The TASB mounts a “community input” façade, but it doesn’t much matter. Most of the candidates are superintendents looking to move up and make more money in a bigger district. There’s not a lot of difference in them.

They’re mostly woke and virtually all of them support the new education fad: Diversity/Equity/Inclusion, which is an educratic name for racism. 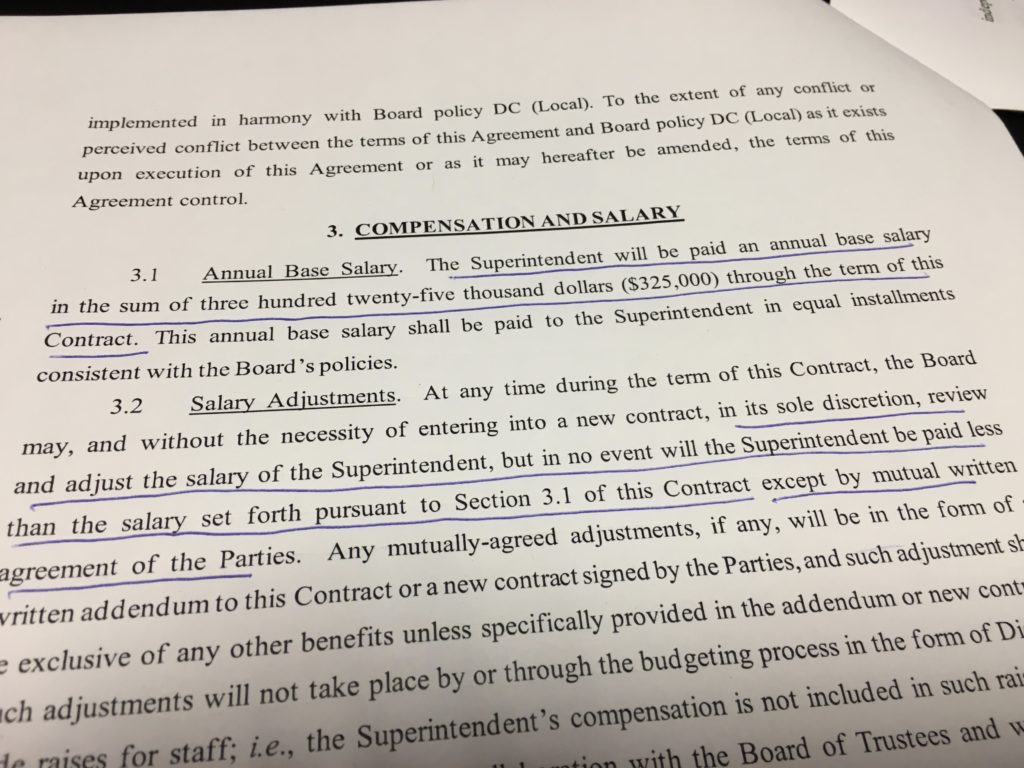 Part of a typical school superintendent contract, this one from Austin ISD. (Photo by Lynn Woolley for WBDaily)

In other words, parents and taxpayers pay the bills while the ISDs teach Marxism to our children.

School super candidates will drone on about student scores, and testing, and baccalaureate programs – all well and good. But no one ever asks them about how to be a truly “independent” school district – one that teaches American exceptionalism, the Constitution, and the benefits of a free-market society.

No one ever asks them about the damage done by splitting the country by race, and by teaching “junk academics” such as Black/Hispanic/Feminist Studies. These are back-door studies on Critical Race Theory, and never believe them if they say different. Race is the big deal in schools now. Superintendents should know better, but they play the game and collect their huge salaries and benefits out the wazoo.

What is the solution?

Fund the police and defund the government schools. It’s the only way out. But the Texas Legislature is controlled by the schools and by the TASB. If any of the legislators of either party wanted to fix this mess, something would have been done long ago. It’s not even an agenda item.

For my part, I have no kids in school, so I just vote against bond issues and try to raise awareness of the problems. I used to be a supporter of local schools. But the woke movement, and the “self-esteem” and “whole language” fads that preceded it have made me realize that we are spending good money after bad.

When I was in school, I was taught to love America and to revere the flag and the Constitution. I was taught about slavery in a way that helped me understand the history. I learned to respect the rule of law, and people for the content of their character and not the color of their skin.

We’re so, so far away from that now.