Get CRT out of schools, or get your kids out.

It’s all the rage in government schools right now to teach children about America’s racist past. Why would anyone do this?   I can think of two driving forces.

One is the Black Lives Matter movement that became prevalent after the death of George Floyd.   BLM is full-blown leftist and even Marxist by its own admission, and has used the tactic of insisting that America is a nation of systemic racism.   The Democrat Party signed onto this in order to take power.

To keep power, the idea seems to be that (A) America is racist to the core, and (B) the Democrats hate America, so vote for them and they’ll change it with stuff like defunding the police.

The other driver seems to be Chinese communist infiltration into our colleges through Confucius Institutes. President Xi Jingpin must be very happy about how this is working out. 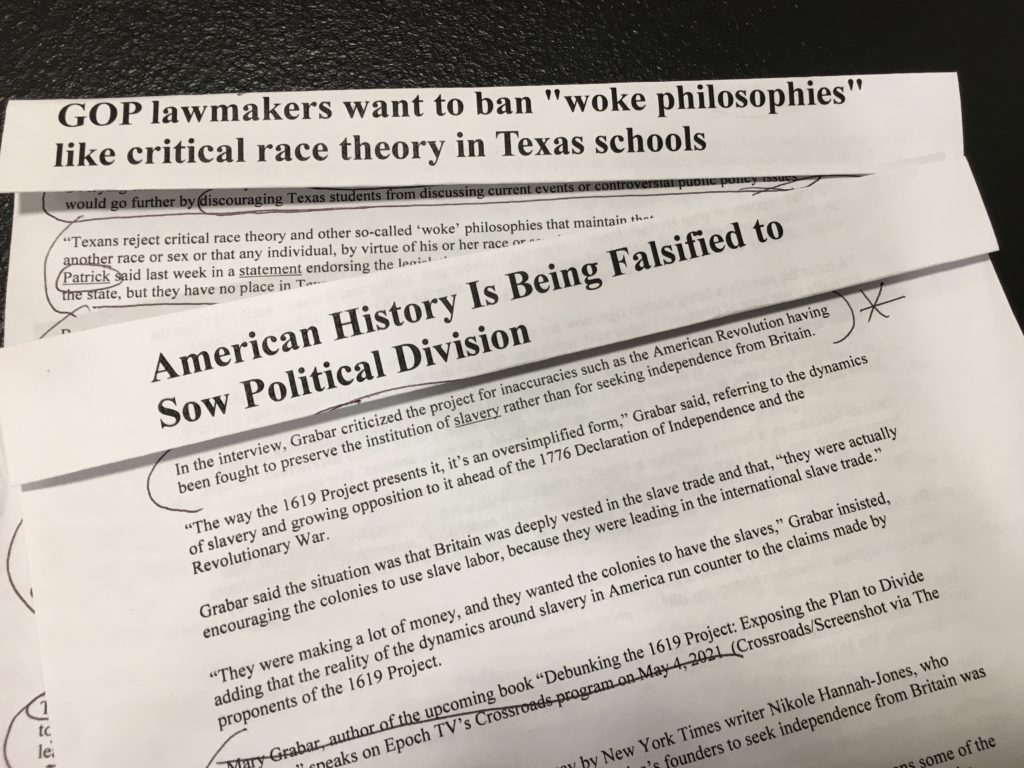 Two articles that could not be more different in point-of-view. (Photo by Lynn Woolley for WBDaily)

ISSUE TWO: CRT in the media.

I have two news stories about Critical Race Theory and the 1619 Project – both from the same day – and neither one labeled as opinion.

One story bemoans the fact that Texas Republicans are working to “limit what public school students are taught about the nation’s historical subjugation of people of color.” The other story explains, “the 1619 Project attempts to cast the Atlantic slave trade as the dominant factor in the founding of America.”

The former quotes “experts” that say Texas is attacking the civics curriculum at a time when students should be learning more about social justice. The latter reports that American history is being falsified and “skews American history for divisive political ends.” One of these publications is the Texas Tribune. The other is The Epoch Times. How hard is it to decide which is which?

ISSUE THREE: CRT and the Educrocracy.

Conservatives and progressives can debate the wisdom of teaching our future population to hate their own country.

But the big teachers unions – you know, the ones that fought the reopening of schools — are not debating. They are solidly on the side of America being portrayed in schools as having been conceived in slavery.

They’ve mobilized to oppose legislative efforts to teach history in a patriotic manner.

In Texas, a red state, teachers’ groups like the AFT, TSTA, and several others seem to believe that students should learn more about “the racism, sexism, and other injustices in our state’s and nation’s history.”

If these left-wing organizations win this battle, what will our country be like in ten years? A sad fact is that teachers are taught to hate America in college and now they want to teach it to children.

American Federation of Teachers Passes Resolution Expanding Its Efforts to Combat Racism, Aligning Itself with the Movement for Black Lives

WASHINGTON—The AFT executive council has passed a groundbreaking resolution, Confronting Racism and in Support of Black Lives, that lays out 19 commitments to combat systematic racism and violence against Black people, including the separation of school safety from policing and police forces.

The resolution states that security personnel should be trained as peace officers and integrated within the school community, with a focus on nonviolent resolution of conflicts with a minimal use of force. The AFT will reconvene a unionwide conversation—including educators, students and parents—on how to transform school security to help achieve a safe and welcoming environment for students and staff, and not a militaristic police state that has criminalized Black and brown students.

The council resolved to support community allies that are spearheading this work, including Black Lives Matter, Color of Change and the NAACP, and committed to demilitarize policing and support national efforts to provide oversight of states through federal legislation prohibiting police brutality. This includes supporting transparent legal procedures for holding police officers accountable for misconduct and violations of law.

The resolution comes on the anniversary of the Mother Emanuel AME Church shooting in Charleston, S.C., and in the wake of the murders of Ahmaud Arbery, Breonna Taylor, George Floyd and Rayshard Brooks, and as the union reflects on centuries of oppression of Black Americans.

The AFT has acted to combat racism for generations, including expelling segregated locals; and this resolution multiplies our work to address all aspects of racism, starting with criminal justice and education. It encourages our state and local affiliates to participate fully in dialogues and efforts with our community partners and allies. It builds on the work of the AFT’s Racial Equity Task Force to combat anti-Blackness and its harmful effects. It calls for cultural competency and implicit bias training for our local leaders and members, to encourage a better understanding between students, patients and the communities they serve.

The AFT will also call on local school boards to pass and enforce anti-racist policies and encourage and support the efforts of teachers, school support staff and our affiliates to address the needs of children who experience trauma from this violence, and fight for the resources—including additional staff, like social workers, counselors, nurses and restorative justice coaches—that students and staff need.

“We are living in a time of three great crises—a health crisis, an economic recession and systemic racism, all made worse by a president who would rather tear-gas peaceful protesters for a photo op than solve the problems the protesters have raised.

The global health pandemic is exposing and exacerbating long-standing and persistent inequities in health, education, and economic security, as these murders underscore the destructive impact of systemic racism and a culture that enables white nationalism and white supremacy.

“Racism didn’t start with George Floyd’s murder and as Rayshard Brooks’ homicide made clear, it will not just end even in the wake of these unprecedented and righteous protests. Combating racism is everyone’s responsibility, which is what this resolution aims to do. As for schools, we must secure adequate funding to help all our students succeed academically and socially, but we must also do all we can to create safe and welcoming environments. That requires us to rethink school security starting with separating police forces from schools and ending the militarism and zero tolerance policies that have criminalized so many of our students of color.

“We are committed to working hand in hand with community allies to address racial disparities and violence in all of our communities, including our union. We will continue to advocate for funding through the HEROES Act so our students have the future they deserve, and we will continue to support the Justice in Policing Act of 2020 as we reimagine a future where police serve and protect all people, not just a select few.

“As we prepare for the most consequential election season in recent history, we must remember that our activism, combined with our vote, will bring about real change. The road to equality is long, but today the AFT has recommitted to ensure that the promise of justice and liberty is a reality for all people.”

“As unionists, we can harness our collective power to make the world more just. Silence is not an option when Black people are being killed before our eyes. Black and brown families deserve to raise their children in a world that does not traffic in the gross inhumanity of racism. The fact this is not self-evident is, in itself, a moral failing of America. Every Black and brown person in this country has a right to live, a right to breathe, and a right to be a part of their community without fear of violence and senseless attack simply for the color of their skin. Our union is committed to doing the work so our country—from the streets to the school buildings—is a country of equality for all, not just some.”

“Racism, while embedded in the foundations of our country, has no place in our society. The pain exhibited in protest over the last few weeks uncovers the deeper wounds we have to heal. We don’t have all the answers, but I know that our union and the labor movement as a whole are open to doing the work and committed to the fight for justice.”

“I fully support this long-overdue resolution, and our passing of the resolution exemplifies that we are hearing what many generations of protesters are saying to us. As a mother of Black children and a grandmother of Black grandsons, this resolution gets to the issues of racism at hand, and we stand at the forefront of addressing them head-on.”

“In considering how to continue to elevate the urgent need to address the racist underpinnings of American society, we must connect the dots between so many deeply troubling facets of our society—from the critically underfunded school districts that educate primarily children of color to the over-policing of Black and brown neighborhoods. Collectively, our union must fight on for a just society as we hold George Floyd—and all those who have experienced similar fates—in our hearts and minds.”