The Democratic Party in America is edging closer to a total crack up.

The Party isn’t simply wrong, or extreme; it’s gone completely nuts. However, the Party’s current trend answers a question I’ve had for a while, and assuages a fear. The question is: can the conservative movement survive in wake of Trump hatred from unified Dems as well as the left-leaning media? The fear is: will Texas turn blue and totally destroy any hopes of the Republican Party for retaining the White House and Congress?

But how rapidly things change.

A better way to state it might be – look how rapidly a trend begins to take over. Note that when Barack Obama was elected president, the Left pretty much believed in marriage as between a man and a woman. California voted that way. President Obama himself claimed to believe it. 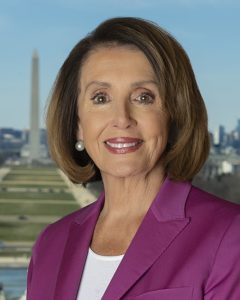 Official portrait of Speaker of the House Nancy Pelosi, photographed January 11, 2019 in the Office of the Speaker in the United States Capitol.

When Obama was elected, men used the men’s room, and women used the women’s room because we still believed, even if the LGBT community was pushing for change, that men and women were different — and that we needed intact families in order to procreate and raise children.

Since those days, Obama evolved, Republicans and independents elected President Trump, and we’ve seen the Democrats lose their minds. Now, in what seems like a sudden lurch leftward, the LGBT agenda is so ingrained that Obama bathed the White House in gay-rainbow lights, men now have “husbands,” women have “wives,” the only real agenda items the Dems have besides impeaching Trump is global warming (that seems more ridiculous by the day), Russian collusion (which we’re still waiting to see proof of), and socialism.

On a daily basis, they are giving us reasons to throw them out of office.

The Democrats have lost their minds.

Look at what some of their most famous voices are saying:

In short, to Democrats, everything you ever thought was great about America is now racist. Every value you were taught as a child is now overturned. Gay is good and straight is bad. The politics of taking a pee is paramount – at CNN, Target, in the halls of the Texas Association of Business, and in our major sports leagues.

Hating America is in.

In the age of Colin Kaepernick, disrespect for the flag gets you an endorsement contact with Nike. Hating males is in too! The new term for being anti-men is “toxic masculinity” and that’s even been proclaimed in a TV commercial from Gillette. (Note that so-called toxic masculinity landed on the beaches of Normandy on D-Day, fought in Vietnam, and went into the World Trade Center to save people’s lives on 9/11.)

Hate, in fact, is a big deal in the Democrat Party.

We see it nightly on CNN, a network that has devoted its primetime and sacrificed its ratings in order to viciously attack Trump. We saw it at the Brett Kavanaugh hearing, during which decades-old memories were recovered – seemingly in the nick of time to stop Trump’s “evil” nominee in the name of sexual misdeeds that Democrats universally believed without evidence. In the end, it came to nothing, but irrational hatred had its moment.

Perhaps the biggest piece of the insanity pie lies with abortion. This what the Left calls “a woman’s right to choose.” New York’s new law is insane. There is no other term for it.

To appease a far-left base, and to get himself reelected, Gov. Cuomo signed the new law. To hear left-wing politicians talk about it, a child can now be born in states like New York, and then, after a discussion with doctors, can be killed. We used to call this murder.

You’ll remember that big-time sports leagues like the National Football League and the National Basketball Association threatened to boycott Texas if we passed a commonsense bathroom bill. That bill would have codified something that humans took for granted for thousands of years – that biological males and biological females are different and are entitled to privacy when they perform bodily functions.

Disgusting lobbying organizations like the Texas Association Business and the U.S. Chamber of Commerce also protested because the bathroom bill wasn’t good for business.

Fine. They can do as they please, but where are they now? They stood up for confused and mentally deranged males to “identify as a woman” and urinate with the girls. Will they stand up for unborn babies? Will they complain that New York might execute a baby that has been born? Hell no, they won’t. The NFL, the NBA, the TAB, and other such organizations are willing to sacrifice American values that made us the greatest country on Earth for a dollar. They see conservatism as little threat to them. But liberals will boycott and raise hell, so they grease the wheel that squeaks.

Succumbing to the insane makes them insane too. That is why I have turned off those sports leagues for decades. It’s one way to fight insanity. But there is another way, and Democrats are handing it to us on a silver platter. That is – to expose them.

Democrats have become so insane that their sickness is now the stuff of headlines.

Trust me, I am glad to see this happen. I am pulling for billionaire Howard Schultz (Starbucks) to get into the presidential race because, while liberal, he isn’t totally insane. He is already calling them out, and featurepapers are forced to cover it.

I am pulling for Elizabeth Warren for the Democratic nomination, but only because Alexandria-Ocasio-Cortez is too young to run. Warren is one of the instigators of the Neo-Socialist movement and AOC is the Neo-Sol prophet. Together, and with help from other inmates from the asylum like Kamala Harris, Julian Castro, Beto O’Rourke, Bernie Sanders, Kirsten Gillibrand, and so on, the American people are learning what today’s Democrats are. No sane American voter can support them.

On WBDaily, we have written that Democrats are evil. We’ve written about them as being dangerous. But we have to admit the facts that are right before our eyes – and take it a step further. They hate this country. They despise the Constitution. They have a deep-seated hatred of men. They think a carbon tax will somehow control the weather. They have tossed out the concept of being male or female. They are baby killers. They are outright socialists.

Democrats are insane. If we keep voting for them, so are we.