They’ve changed.  They‘re not the same.  Democrats, especially those who want to be president are spending an inordinate amount of time apologizing for past positions that reflected traditional American values – but no longer fit in a far left, socialist party.

If you watch the Sunday shows, you’ll see this playing out before your eyes.  In just two segments of CNN’s State of the Union, Jake Tapper interviewed two Democratic candidates about past positions.  He asked Kirsten Gillibrand (D-NY) how it is that President Trump can be a racist because of his views on immigration when she held the exact same views in earlier campaigns.  He asked Tulsi Gabbard (D-HI) about her former tough stance against the homosexual agenda and her support of gay conversion therapy.

President Obama, historically, provides both with an excuse.

Obama said that he “evolved” on issues like support for homosexual marriage.  And that’s the kind of claptrap we got from both Gillibrand and Gabbard.  At least  Rep. Gabbard admitted to changing her views.  Sen. Gillibrand could not come up with an answer as to why she is not (or was not) a racist, while Trump is.  So she simply avoided the questions and Tapper eventually moved on.

It is a fact that political parties change over time – but usually it’s for the better. 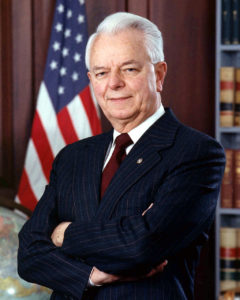 Democrats were once part and parcel of the Ku Klux Klan.  Sen. Robert Byrd (D-WV), who was praised by all the bigwig Dems at his funeral was a recruiter (kleagle) for the KKK.  Pretty much all Democrats had forgiven him by that point, as had many other Americans.  People can change for the better.

You could say that Byrd (who was a despicable, vain politician) changed for the better on this issue because he realized that racism is wrong.  I can certainly give him the benefit of the doubt.  But not today’s politicians.

Gillibrand knows well that her prior position on immigration, virtually identical to Donald Trump’s, was correct.  Intellectually, she knows that the United States cannot survive massive inflows of non-assimilating foreign nationals that do not speak English and do not have marketable skills.

She knows that massive and rapid demographic change brought on by an onslaught of people that do not share our history, language, values, or a reverence for our Founders and our Constitution just might someday destroy the America we know.

Gabbard, who is left-wing, but still is the best and most logical of all Democrats in the House and Senate, is also unfit to serve.  With a straight face, she told Tapper that her former rants against homosexuality and her belief in therapy to help gays overcome the lifestyle, was wrong and that she has now evolved.  Perhaps a better term would be that she “obamaed.”

You’ll recall that when Obama took office, he was opposed to same-sex marriage as were the voters in the state of California, and most other Americans.  The LGBTQIA community put pressure on him, and virtually overnight, the President of the United States was bathing the White House – the people’s house – in rainbow lights signifying support for a destructive and unnatural sexual perversion.

Gabbard knows this and she likely hasn’t really obamaed.  She wants to be president and she is banking on the fact that, of all the left-wingers running, she is the least ignorant.  Frankly, I doubt that Gillibrand has obamaed either.  She knows full well that her former stance on immigration makes sense and her current one does not.

It’s all of them.  They’ve all gone crazy.

Robert Francis “Beto” O’Rourke, the new national media darling, almost skateboarded his way to the Senate.  He failed, and now he’s the most famous political loser of all time, and is expected to be a top tier candidate.   If he fails at the nomination, the chances of his being invited onto the ticket as vice president are probability upwards of 90 percent.

Have you thought about Beto’s positions?

Do you know what his specific views are about Kim Jong Un?  China?  Syria?  The national debt?  Probably not, but you know he can skateboard and you’ve seen his teeth up close.  He’s kennedy-esque.  This is dangerous, and the other candidate from Texas is even worse.

Julian Castro appears on the surface to be a lot like his namesake from Cuba.

He is a socialist in the mold of New York’s Alexandria Ocasio-Cortez (the OTHER current media darling), who wants 70 percent marginal tax rates and free stuff like college and healthcare.  Castro is not shy about his liberal views.  He believes that liberalism is the new trend and that he can deliver Texas to the Democrats.  He’s not a top tier candidate, but all traditional, Constitution-loving Americans ought to pay attention.

If Castro or Beto is on the eventual ticket in any way, Texas might go blue.  If so, the United States is doomed to a very dismal future of social justice, confiscation of your paycheck by the government, carbon taxes, unrestricted abortion for any reason, and open borders.

If Democrats win, it’s an open question as to whether our country will be destroyed by socialism or by invasion.

Democrats, as we have written in this space, have become the party of evil.  A Democrat of today is nothing like John F. Kennedy who fought the Nazis in World War II, fought the Communists during the Cold War, stood down Fidel Castro in the Cuban Missile Crisis, and believed in lower taxes as an economic stimulant.

There is no one like him remaining in today’s miserable Democrat Party.  Most of what toady’s Dems stand for is hatred of Donald Trump.  That is likely the reason that Kirsten Gillibrand is no longer able to survive in her party with views on immigration that mirror Mr. Trump’s.  She and Gabbard and all the rest are now required to be part of the “resistance” and any views shared with Mr. Trump must be eschewed.

Democrats are evolving and obamaing.

A nation that is willing to spend its wealth on global warming abatement cannot survive.  That’s what Democrats want to do:  take your money and give it to developing countries whose strongmen and dictators will steal it.  Meanwhile the weather, controlled by the sun, will do whatever it does.

Democrats want to implement social justice.  That now seems to mean that, if a criminal is shot by a policeman, the policeman is always wrong.  It means that men are scum and consumed by “toxic masculinity” (the latest left-wing buzzterm) and they must be condemned – even in TV commercials sponsored by a once revered company that used to promote shaving cream instead of social justice.

To Democrats, even the idea of a colorblind society is racist.

Democrats now believe that Americans are less worthy to be here than people who break in to the country. Somehow, the current narrative is that ALL illegal immigrants are made of the Right Stuff and they will save America and those of us who are multi-generational Americans are old and stale, and our time is over.

Democrats ignore murders  and other crimes committed by illegals – which are substantial – and instead, want to fit each of them them for a halo.

Unbridled and irrational hatred of Donald Trump has changed Democrats into political ogres.

Consider this:  character flaws and sexual dalliances that Democrats overlooked during the Clinton years have now become grounds for impeachment.  If a Batman villain were to run for president on the Democratic ticket, I would suggest Two Face!  Things that Bill Clinton did drew lectures from the Left about how what Slick Willie did with Monica Lewinsky was his personal business and that a president’s sex life was off limits.

Then why isn’t Trump’s sex life off limits?  CNN became obsessed with the Stormy Daniels story to the point of nausea – they just would not stop.  Yet, so far, it hasn’t amounted to much.  Besides, we know of a $17 million dollar congressional fund that has been used to pay off claims in sexual harassment cases.

To Democrats, it’s OK if Clinton cheats.  It’s all right if members of Congress from both parties lie, cheat, steal and have sexual escapades whether it’s a Democrat like Bob Menendez or a Republican like Blake Farenthold.  It just can’t be Trump.

It’s not just congressional Democrats that are hypocrites.

It’s also the Democrats that work at CNN, all three broadcast networks, the New York Times, the Washington Post, the Dallas Morning News, and in statehouses across the country.  They’ve all evolved.  They obamaed.  They can’t promote anti-Americanism, enough.  Or perverse lifestyles.  Or the killing of unborn children.

The United States of America is flirting with danger.

A political party and the media that supports it becomes dangerous when it tosses out the values that made America a great nation – and substitutes socialism, questionable science, hatred of males, abandonment of the concept of gender, a general disregard for God and the Christian faith, and perhaps most of all, a disregard for the sanctity of life.

Democrats are not only evil.  They are dangerous and they are trying to take over the United States of America and transform it into a miserable, decadent, green, left-wing “utopia” where everyone except the elites will be miserable.

If you don’t see that, you aren’t paying attention.

Lynn Woolley is a writer for WBDaily and a podcaster at Planet Logic.
Email him at lwoolley9189@gmail.com.