Ask yourself this question: would you want to pick up a Superman comic and see the Man of Steel kissing his boyfriend? Me neither.

The entire industry is dealing with a number of problems, and adding woke storylines is a self-inflicted wound. At DC, we’ve learned that “Superman: Son of Kal-El” isn’t selling well. It’s not even in the top 50, at under 69,000 copies. It features Superman’s son as a climate activist dating a male reporter. In fact, the two are shown kissing. 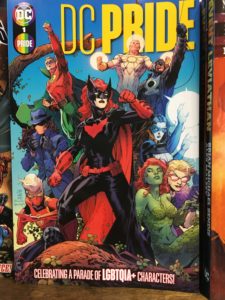 This was the straw that broke the camel’s back for me. An entire, giant-sized comic book with all gay superheroes and plotlines. I had been thinking of weaning myself off of comics due to the cost – a single comic can be $4.99 for a ten-minute read.

This issue strengthened my resolve and I have not purchased a new DC or Marvel since. I like the old collectible books better anyway, and I’ll buy one those from time to time. Apparently, I’m not alone.

DC started going down this road with the 2006 movie Superman Returns. To be sure, I thought young Brandon Routh made a wonderful Superman. But his excellent performance was hampered by a terrible script, miscasting of characters such as Lois Lane and Lex Luthor, and (worst of all) woke plot devices, although I had never heard the term “woke” at that time.

“Truth Justice and the American Way.”

IMBd has the entire quote from the movie in context:

Okay listen up. I wanna know it all, everything. Olsen, I wanna see photos of him everywhere. No, I want the photos. Sports, how are they going to get that plane out of the stadium? Travel, where did he go? Was he on vacation? If so, where? Gossip, has he met somebody? Fashion, is that a new suit? Uh, health, has he gained weight? What’s he been eating? Business, how is this gonna effect the stock market? Long-term? Short-term? Politics, does he still stand for truth, justice, all that stuff?

Video:  Perry White trashed the slogan for the first time in “Superman Returns.”

More recently, publisher Jim Lee has changed the slogan to:

“Truth, Justice and a Better Tomorrow.”

Even going back as far as the early seventies, DC was “going social,” as Green Lantern teamed up with a woke Green Arrow to battle racial injustice and such, from the typewriter of Dennis O’Neil and artist Neal Adams. I never had a problem with that. Racial injustice will always exist in some form, and in those days as now, I have no problem with rooting it out assuming it’s real. Woke isn’t real.

Besides, no one forced me to buy the comics, and DC had plenty of other titles that were still mainstream.

Note that in those days, all DC heroes from Superman to Batman to Wonder Woman to Sugar & Spike all had the same personalities. They never killed. Never lied. Always obeyed the law and respected authority. It wouldn’t have surprised me if Batman showed at Jim Gordon’s bowling league. A creature of the night, he was not in those days.

The docile and uninteresting Batman was about to be canceled in the sixties when DC brought in editor Julius Schwartz and artist Carmine Infantino to modernize him. Batman was saved, but the book was still essentially kid fare.

Then came the Batman TV show and character sank into camp. He needed fixing again. Neal Adams was part of another revamp that took Batman back to his roots as a detective who was operating in the real world – a gritty Gotham City like the one we see on TV and in movies these days.

While Batman was battling alien menaces (seriously, he was) in the sixties, Superman had acquired a “family” under editor Mort Weisinger. He had Kandor (a Kryptonian city in a bottle), Supergirl (Linda Lee), Superhorse (Comet), Super Money (Beppo), and Streaky the Supercat.

To be fair, Batman had Batwoman (Kathy Kane), Batgirl (Betty Kane), Ace the Bat-Hound, and bat-this and bat-that. Each hero had an extra-dimensional sprite to confound them with magic tricks. It was wearing thin, and so fans rejoiced when newer management and talent brought the heroes into a darker, more realistic world.

Marvel also had an outsized influence on DC.

DC stories were all plot. Remember, the heroes all had the exact same personality. When Stan Lee, Jack Kirby, and Steve Ditko started the “Marvel Age,” the creators imbued their characters with distinct personalities and showed them bickering and fighting.   Marvel started selling better than DC, and that was one engine of change.

Now the engine of change is our new woke society, courtesy of left-wing colleges and universities.

It’s all a me-too thing.

If Marvel is going to be woke, then so is DC and vice versa. While Jim Lee is taking DC to the precipice, Marvel is there as well. At any point, Captain America or Thor may be a woman.

And over in the Marvel Cinematic Universe, producer Victoria Alonso promises more LGBT characters. If you haven’t heard, Thor’s enemy Loki has come out as bisexual and gender fluid. Maybe that’s due to the beating he got from the Hulk in one of the Avengers movies, but who knows?

Comic books already have problems and do not need this one.

A few decades ago, comics were almost literally printed on toilet paper. But that’s not the case anymore. Comics are printed a high-grade paper with a color palette that rivals any other slick magazine. But with that comes high prices. My guess is that most fans have to be more selective unless they get a larger allowance than I ever did.

The fact that comics are a print medium is also not in accordance with the universe as it exists today. The paradox is that comics are to read and to collect. That means the printed versions have to keep coming. There’s no telling what they will cost after a few years of bidenflation.

The bottom line is that comics must stop catering to a narrow audience and try to please long-time fans who have abandoned them. There is no indication that our current woke society will last even another decade. College students will graduate into the real world and will learn about real-world problems. They’ll begin to realize that certain facts are immutable, such as a person’s sex.

While gay people may celebrate the idea of a gay Superman, the rest of us don’t. We want Superman and Batman and Spider-Man to be manly heroes. We want Wonder Woman to be pretty, but also to be a powerful force for good. What happens on Themiscyra ought to stay on Themiscyra.

For my part, give me manly (or womanly as the case may be) heroes that love this country, and tell me some good stories. And perhaps then you can sell more than 68,800 copies of Superman at $4.99.   If you don’t, I expect comic books may soon go away.  After all, without the American Way, I don’t see a Better Tomorrow for comic books.