Originally posted on December 10, 2000 at BeLogical.com.

EDITOR’S NOTE (Undated): We talk about Steve Ditko from time to time on the radio show as we did this morning. Ditko is a recluse and he rarely gives interviews. But’s he’s the driving force who plotted and drew the early Spider-Man stories. 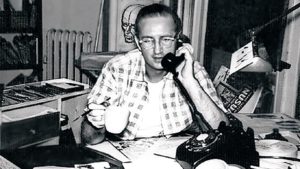 Understand that the comic book industry, like other parts of the mainstream media, is very liberal. DC Comics is owned by Time-Warner and Marvel is owned by Disney. Liberal characters such as the Silver Age Green Arrow (written by Dennis O’Neal) are crusaders for Social Justice.

Other characters, such as the Rawhide Kid and Batwoman, have gone gay. The companies will do most anything to sell their wares, and they always glom onto current trends. Conservative stories are tough to find.

So when a creator such as Steve Ditko comes around, he could possibly have trouble getting his stories into print. Ditko is an objectivist – a follower of Ayn Rand’s political philosophy. You see it in his stories. There aren’t many creators like him.

The only current exception to the rule in 2015 is “Groo the Wanderer” by Sergio Aragones and Mark Evanier. Groo is no Conan. He’s kind of a buffoon and his dog, Rufferto, is actually smarter than he is. But the stories often point out the pitfalls of Big Government and the benefits of market forces. Aragones and Evanier have somewhat of a free hand.

Working with the more liberal Stan Lee on the early Spider-Man, Ditko may have been restrained. I do not know that for a fact; it’s simply a guess. In any case, as Spider-Man was gaining in popularity, Ditko quit Marvel and went to a much smaller company, Charlton. There, he was a superstar and he could do as he pleased.

He then proceeded to create Vic Sage – “The Question.” Imagine if you can, a conservative super hero based on logic. Of course, Ditko was criticized. And that takes us back to the year 2000 for this classic column:

Mr. Jon B. Cooke, publisher of a wonderful fan magazine for comic book collectors, Comic Book Artist, recently informed me that a letter of mine (or portions of it) are due to be printed in a forthcoming issue. The letter was my response to an interview with a highly regarded comic book writer about politics in comic books. It seems that today’s writers often take the liberal viewpoint — and I wanted to come to the defense of a writer/artist named Steve Ditko who is known in the business for being conservative. The book being discussed in the interview was Ditko’s Mysterious Suspense, featuring a superhero known as “The Question” who in real life was a radio/TV commentator named Vic Sage who used logic as his guide. Sound familiar?

The latest issue of Comic Book Artist [August, 2000] was nicely done, as usual. I was saddened to hear of the death of Dick Sprang, a man I consider the best artist ever in the field, and the man who designed and delineated the definitive Batman. No one like him seems to be on the horizon, though one wonders what a story would look like if illustrated in the Sprang style by [artist] Peter Poplaski.

In your pitch for Streetwise, you mention something about… “some guy named Eisner [that would be Will Eisner, creator of the Spirit] wrote the forward…” Just curious — did you mean foreword?  [This was me being snarky. My apologies.] 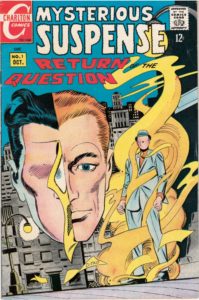 When I received this issue, I went straight to the Alan Moore [creator of “V for Vendetta,” “Watchmen,” and “The League of Extraordinary Gentlemen”] interview because I think Moore has elevated the comic book form more than any other writer.

His “Watchmen” is still the most intricate comic book series ever written, reading more like a classic novel than a comic book. Certainly, young kids wouldn’t have understood the rich tapestry that Moore and his collaborator, Dave Gibbons, inserted into the work. And boy, was the politics in that series interesting! I have learned, however, to try to set aside politics as much as possible when pursing today’s pop culture. Otherwise, I would have to find new ways to entertain myself.

It seems that most of today’s comic book creators are lefties. I grew up with a conservative Superman, but now he and Lois are portrayed as raving liberals. (Remember the story in which Superman would have let the Joker kill Lois rather than kill the Joker? Get real!) There is a character who appears from time to time in Superman (Agent Liberty) who is a novelty because he is a conservative. How times have changed.

So when I read the comments about Steve Ditko, I pulled out my copy of “Mysterious Suspense” #1 [published in October, 1968] to look for those right wing wacko comments that Mr. Ditko may have inserted. I found a couple.

On page 6, a character says:

“That stupid Sage. A rumor spread about him speaking out against the U.N. Instead of denying it, he asks if decent people should deal with cutthroats and if not, why should free governments deal with dictatorships that enslave their own citizens. And should we recognize the right of a dictator to make slaves of people.”

Ditko at his right-wing worst.

So Vic Sage didn’t deny anything as Bill Clinton so often does. He admitted that his opinion is that the United Nations should not deal with dictatorships. Let’s see if that rings any bells in today’s society where a liberal president sent a little boy back to an island prison so he could be reprogrammed by an aging and anachronistic dictator. How prophetic were the words of Mr. Ditko’s script.

“Our standards are high. I won’t tolerate impurities in drugs that people will introduce into their systems. Vic won’t allow distortions in his evaluations which are to be absorbed by his listener’s mind. I protect my drugs with science and research. Vic protects his views with reason and logic! His words, like my drugs, are intended to clear unsound conditions…not to sound nice or taste good.”

The pharmaceutical company is being threatened with a Jesse Jackson-style boycott unless it stops sponsoring the Vic Sage commentaries. The character goes on:

“You can refuse to buy my products or listen to Vic. But if you deliberately reject quality and truth, you must be willing to settle for that which is inferior and lies!”

That’s great, powerful dialogue.  (Note:  The plot and art in this issue were by Ditko.  The dialogue was by D.C. Glanzman,]

What does it remind you of in our modern day?

Gays and lesbians trying to shut up Dr. Laura Schlessinger, just as the thugs in the story were trying to shut up Vic Sage. In the story, Sage was exposing lies and telling the truth about corruption. In real life, Dr. Laura, who strongly believes that homosexuality is unnatural, speaks out for what she believes to be right. In both cases, in this land of free speech, opposing groups work to shut up disagreeable, and therefore unacceptable ideas.

We have a term for that. It’s called “Political Correctness.”

Alan disagrees with Ditko because Ditko believes there is a right and a wrong. But on the left, there is only moral relativism. Mr. Ditko may believe in “white supremacist dreams of a master race,” but I doubt it. I haven’t read everything Ditko’s ever done, but I didn’t get that out of “The Question.” Being conservative doesn’t mean you’re a Nazi.

The other thing I enjoyed about “The Question” when I reread it was the use of the word “logic” to describe Vic sage’s commentaries. That’s a word I use in my daily commentaries on the radio, and at my website, BeLogical.com [now replaced by WBDaily]. Sorry guys — I enjoy your work tremendously and will continue to read CBA and the ABC titles — but liberalism holds no appeal and no logic for me.

Editor’s note (8-2-20): The great Steve Ditko passed away on June 29, 2018. So far, no conservative creator has emerged to take his place in the world of comic book superheroes.