When Hoss Cartwright came to town

If you were born after 1980, you may not recognize that name.

But if you grew up in the 60’s like I did, you know Hoss Cartwright, his father Ben, and his brothers Adam and Little Joe. I hadn’t thought much about the old western series “Bonanza” in a while. But I happened to see season one in a bargain bin – and bought it on a whim. 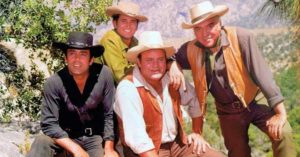 I was fairly bored with the first couple of episodes – wondering why the show was such a sensation back in the day. But it’s grown on me. Each episode is a little morality play with some lesson to learn about love, life, or the merits of hard work.

Then I got to thinking about the people who made the series – they must have been liberals. They were. Dan Blocker, who played Hoss Cartwright, came to Temple when I was 14, on behalf of Lyndon Johnson. I was there. Liberals then certainly had different ideas from liberals now.

Westerns were a dime a dozen in those days – but Bonanza stood out.

ABC had all the old Warner Bros. westerns like Cheyenne, Maverick, Sugarfoot, and so on that I wrote about in the book “Warner Bros. Television.” CBS had Gunsmoke. NBC had two westerns that stood out. One of them was Wagon Train, and the other was Bonanza.

Set in the beautiful, wooded “Ponderosa Ranch” near Virginia City, Nevada, at the time of the “Comstock Lode” silver rush – the show was an early sensation because it was shot and broadcast in color. People actually tuned in to see the lush countryside on the network (NBC) that pioneered early colorcasting, and chose a peacock as its logo.

The show also had a theme song that stuck in peoples’ minds. All this, and the camaraderie of the father and his three sons cemented Bonanza as a top show for 14 seasons from 1959 until 1974.

Morality was the underlying theme.

In virtually every episode, either Ben (Lorne Greene) or one of the sons (Blocker as “Hoss,” Pernell Roberts as “Adam,” and Michael Landon as “Little Joe”) is faced with some moral dilemma that would be solved inside the hour. Sometimes, all ends well, but always, the choices are all difficult.

In the episode “The Truckee Strip,” Little Joe falls in love with a young girl who happens to be the daughter of a rancher who claims ownership of a piece of land that Ben also claims. Note that property rights were important on Bonanza, and the Cartwrights are always fighting for what is theirs.

Little Joe ultimately decides that love outweighs the value of the land and he tries to convince his father of that. Eventually, Ben tells Little Joe that his sons are far more important than land. The girl, Amy, played by Adrienne Hayes, is killed in the end by a nasty ranch hand played by James Coburn. It’s well done, well directed by Christian Nyby, and it makes you think about what is really important in life.

And it was almost certainly Democrats who made this show.

Remember that when Bonanza premiered on September 12, 1959, Buddy Holly had been recently killed in a plane crash. John Kennedy had not yet been elected president. Politics still ended at the water’s edge. Indeed, most Democrats shared basic values with Republicans. The differences were in matters of policy.

From the collection of Lynn Woolley

When LBJ ran for a full term, Hoss got involved.

Dan Blocker (who had once played “Hognose Hughes” on Maverick) was a big man, and arguably was the most popular member of the Bonanza cast. In those days of three networks, that made him a household word in every nook and cranny in America. He wasn’t Dan Blocker to most folks; he was Hoss!

After President Kennedy was assassinated in 1963, Vice President Johnson finished JFK’s term, and announced for election in his own right. In 1964, Johnson was up against his Republican rival Barry Goldwater.   While movie actor Ronald Reagan was making his famous “A Time For Choosing” speech, Blocker was stumping for LBJ. 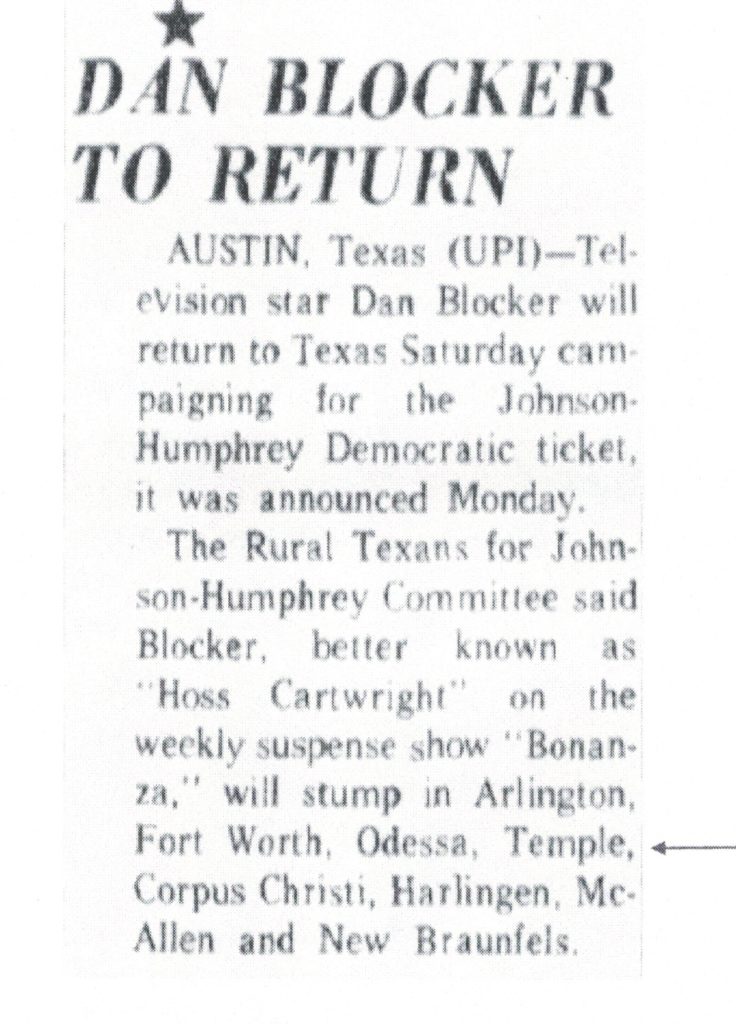 Blocker spoke from a temporary stage on the grounds of Temple’s Municipal Building to a crowd of thousands. Here’s what I remember: The crowd loved him and he promised to return to Temple. Signs were handed out that read: “Bell County Democrats Welcome “Hoss.” At the bottom was an LBJ bumper sticker. Me, being me – I kept mine and have had it for 53 years as of this writing.

Dan Blocker passed away on May 13, 1972 in Los Angeles, at the age of 43, of a pulmonary embolism following gall bladder surgery. President Johnson, beaten down by the Vietnam War, served a single term and announced that he would not seek nor accept his party’s nomination for a second term. Liberals still control Hollywood, but they’re not into morality plays anymore. And here in Bell County, Texas, there aren’t many Democrats left.