Frustrations of an old white guy in an Orwellian society

“It was a bright cold day in April, and the clocks were striking thirteen.”
—George Orwell (Eric Blair) Nineteen Eighty-Four: A Novel (1949)

Big Brother is now in charge. Doublethink is here. Oldspeak is dying. Newspeak, the official language of Oceania, has arrived in America with a bang. History is being shoved down the Memory Hole.

Things we know to be lies are now true.

WAR IS PEACE
FREEDOM IS SLAVERY
IGNORANCE IS STRENGTH

RACE IS EVERYTHING
AMERICA WAS NEVER GREAT
DIVERSITY IS STRENGTH

The Lady of Logic ordered me a T-shirt that says:

That’s not likely to happen.

The warning that was “1984” has proven to be prophetic.

My logical mind sometimes gets tied into knots.

…racism is strong in Temple.

I’ve interviewed Mr. Walsh twice and I liked him both times.  But where does this viewpoint come from? 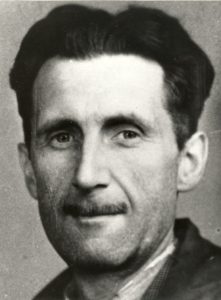 My peers are blamed for all of America’s ills from slavery to hangnails. When I was briefly serving as general manager of KNCT-FM at Central Texas College, I was forced to take diversity (sensitivity) training. (Nothing against CTC here; all colleges do this, and many corporations.)

It wasn’t as bad as I expected, and the trainer was very good, but trust me, this type of training is not about how others should tread carefully around me and respect my culture.

It was about how I should understand black, brown, and LGBT culture and not ever offend them.

There is no affirmative action plan for me.

If I possess equal qualifications for a new job along with a black applicant, a brown person, and a woman, I will come in fourth every time.

If I were elected to Congress, I could not join a White Congressional Caucus because that would be racist. But a BCC and an HCC is just fine so long as they are liberal. The 2020 Democratic Party’s vice presidential nominee was selected on the basis of race and gender, the very essence of racism and sexism. The double standard is becoming untenable.

Corporations are all about glorifying terrorist organizations. 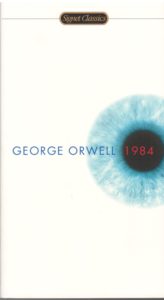 The cover of my Signet Classic edition of “1984.” Scan by Lynn Woolley WBDaily.

It’s as if these “woke” companies do not understand that like Black Lives Matter and Antifa are the organizations that are burning America’s cities.

They send out mass emails all the time, and I try hard never to use those companies again, but they’re all doing it.

Goodyear has said BLM and LGTB “Pride” shirts are good — but not MAGA shirts or caps. I don’t want to withdraw from society, but the new woke America is dangerous and divisive. I will never buy another Goodyear tire.

I’m done with Uber, Airbnb, the NBA, and the NFL. College Football is hanging by a thread in my life.

I believe America’s biggest a-hole is LeBron James — just ahead of the despicable Colin Kaepernick.

The nasty things Oprah Winfrey says about our country are offensive.

James and The Oprah became rich in America — not Africa. We’re at the 75th anniversary of the end of World War II. And yet, ignorant morons on the Left cannot respect our flag or even our veterans.

As I said, the NAACP’s Benny Walsh seems like a nice man, but if thinks Temple, Texas is a racist town, may I suggest Portland to him? He appears to be simpatico with the “peaceful protesters” there.

In Portland, the clocks are striking thirteen.