Editor’s note: This column could refer to most any story submitted through the Associated Press to hundreds of newspapers and broadcast stations that robotically use the AP as if it were honest.

The AP has lost all pretense of being a down-the-line news source. It is openly anti-Trump and often seems supportive of the thuggery known as Black Lives Matters. This a companion piece to a column I wrote while in Manassas, Virginia about USA TODAY, a similarly left-wing rag that despises President Trump.

WBDaily, while openly conservative in tone, is dedicated to truth and to the preservation of the American Way. We are also dedicated to the concept of free speech and peaceful protests that do not destroy lives, monuments and personal property. It would be nice if the Associated Press did as well.

This column originated as an email to AP reporter Amanda Seitz. The email did not bounce, and we have confidence that it was delivered. If we receive a response, we will add it to this column. We are not holding our breath. 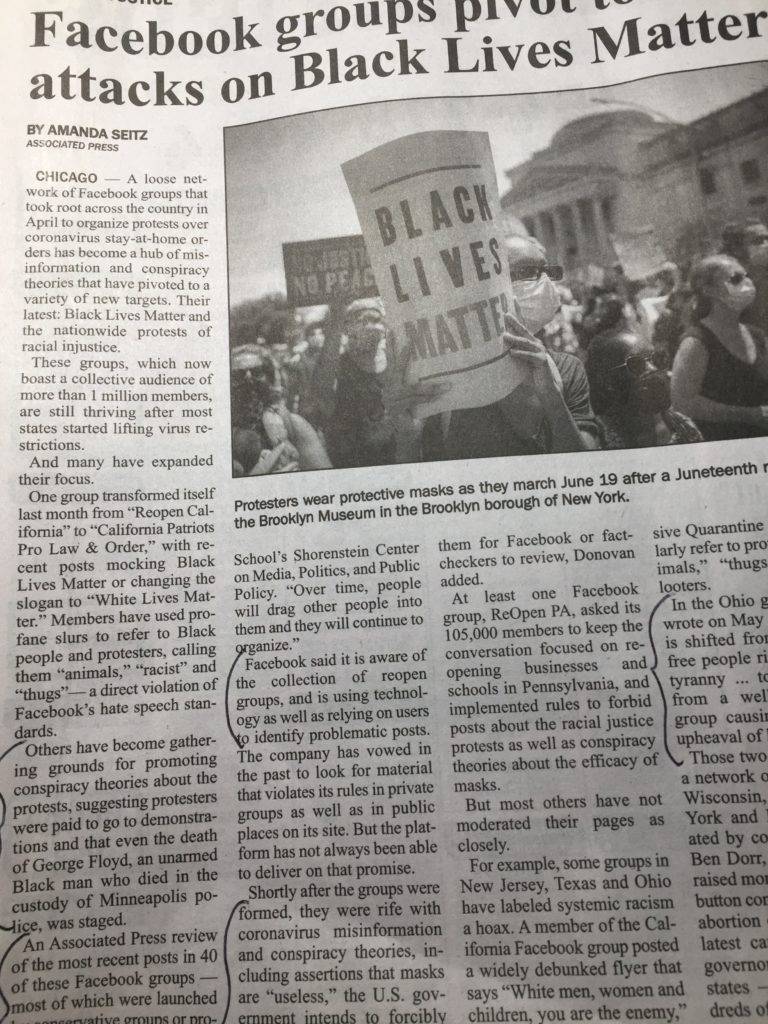 Amanda Seitz in print (Photo by Lynn Woolley for WBDaily)

My name is Lynn Woolley. I’m a long-time writer, radio host, and podcaster that has long been disgusted with the overt bias of the Associated Press. Your article on Facebook groups is rife with bias and outright untruths. The bulk of it seems to be your opinion. There is no balance whatsoever. Here are some examples.

“…others have become gathering grounds for promoting conspiracy theories about the protests, suggesting protesters were paid to go to demonstrations…”

…is left-wing bias. First, George Soros is a well known felon and hater of the United States. The Associated Press should expose him rather than defend him.

As for conspiracy theories [she mentions here that the murder of George Floyd is said by a conspiracy theory to have been staged], there are plenty of them on the Left including the debunked (to use a favorite left-wing word) Russian Collusion Conspiracy, which the AP promoted intensely with no investigative journalism to verify it.

It was nothing more than a talking point for left-wing media such as the New York Times, CNN, and (sadly) the AP to use against Mr. Trump. I have yet to see any retractions or apologies to President Trump for this misreporting.

“…protests over the killing of Black men and woman…”

I first noticed this after a trip to Washington DC two weeks ago then I was saddled with nothing to read but USA TODAY in my hotel. Using an upper case “B” in the word “black” must be for some type of moral authority. But if you do it, then White, Brown, Red, and Yellow must also be capitalized for consistency.

“Facebook is aware of the collection of reopen groups, and is using technology as well as relying on users for problematic posts.”

Oh so? Is Facebook now a publisher rather than an aggregator of opinion?

It has two choices that you did not mention. One is to allow free speech under the First Amendment. The other is to treat left-wing comments and groups the same way it does with right-wing ones. The problem is that Facebook (and the AP) seem to think its own opinion is normal and others are out of the mainstream.

As one who loves this country, I disagree. Facebook and the AP are out of my mainstream.

You wrote about misinformation on FB such as…

“…masks are useless” and “…COVID-19 is a hoax intended to hurt President Donald Trump’s reelection chances this fall.”

Some people believe masks don’t work. That is an opinion that you seem to think must not be allowed.

On the second point, it’s obvious that COVID-19 is not a hoax, but it is also a fact that it is being used as a cudgel against Trump. An honest reporter would have listed it as the latest in a series of left-wing soft coup attempts that include obtaining Trump’s tax returns, the Access Hollywood video, the debunked Russian Collusion Conspiracy, the Ukrainian phone call and the subsequent failed impeachment.

COVID and the current racial unrest are being used against him even though his civil rights record is far better than that of Barack Obama. (You could look it up.)

You talk about the confrontation at the mansion in St. Louis with no context. The people who live in the mansion were BLM supporters, but believed that their house might be burned down or ransacked and that they might have been killed. You never mentioned that. Instead, you made the protesters look like victims. This is journalistic malpractice.

“…one user wrote on May 31: ‘The focus is shifted from the voice of free people rising up against tyranny … to lawless thugs from a well known racist group causing violence and upheaval of lives.”

The term “thugs” is defined as individuals operating outside the law to intimidate and to disrespect other people’s property. That’s my definition. However, the term “domestic terrorists” might be more appropriate since more than 21 people have been murdered in these riots.

I have not yet seen the AP do a story on the founding of Black Lives Matter, its Marxist connections, or its stated mission to destroy the traditional family. Again, this is journalistic malpractice.

This was attributed to Nina Jankowitz at the “nonpartisan Wilson Center.” First, I thought of Joe Biden — a creepy guy in a basement. That’s why I laughed. The second thing is that you quoted a “think tank” named after an avowed racist (Woodrow Wilson) without blinking an eye. Seriously, shouldn’t BLM burn down this think tank?

The overriding problem with your article is that it is not an outlier.

The palpable liberal bias exhibited here is typical of the Associated Press. In the same edition of my local paper was a story by Jonathan Landrum Jr. on “Lift Every Voice and Sing.” While that’s a fine song, I was struck by the moral authority that Landrum quoted — namely, the Right Rev. Al Sharpton who fabricated the Tawana Brawley hoax — but is still used as a source by the AP. Why is that?

Finally, I would like to see the AP become the unbiased and reliable news source it used to be. You could start by covering the tragic story of Tony Timpa who was killed by Dallas Police in the same way that George Floyd was killed. Timpa was White (capital W) so he does not fit the narrative – but maybe he deserves justice as well. There is plenty of video and the story was reported locally. Nobody marched or seemed to care about Timpa’s “rights.”

You could also report on Amber Rice who was run over and killed by illegal Mexican nationals (Juan Francisco Molina was the driver) near Temple, Texas a few years ago as she was about to graduate from college.

You could write about Jenny Garcia, a legal immigrant from Cuba, who was brutally raped and then stabbed to death by David Diaz Morales who had been deported once before. That happened in Austin while left-wing DA Ronnie Earle was in office. You could but you won’t. 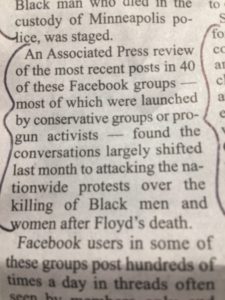 In my area, some people have responded to AP bias by cancelling their newspaper subscriptions.

That’s sad. The AP was a one-trusted source of down-the-line information that we all need to make vital decisions. Now, your stories almost without exception are slanted left and you are part of a “resistance” against a president that I and millions of others voted for and hope to reelect.

I would never ask you to be on the Trump Train. You shouldn’t be. But read your own stuff. Look at your despicable coverage of the President’s speech at Mount Rushmore and do some soul searching. Are you reporting the news or are you working for the Democratic Party?

I intend to make a column out of this letter for my website WBDaily and I hope to be able to include your response and perhaps that of an AP senior executive. I know that it’s unlikely you will have a response. That too is sad.

WBDaily is awaiting a response.