The protesters around America are right about one thing. There is a lot of injustice going on in America.

In my hometown, Temple, Texas, a Friday evening protest was organized around the December 2, 2019 killing of Michael Dean during a traffic stop. Temple officer Carmen DeCruz was arrested and charged after a lengthy time during which the police, the city, and the Texas Rangers wrapped a tight blanket of secrecy around the incident.

I did a live Facebook video from the protest. 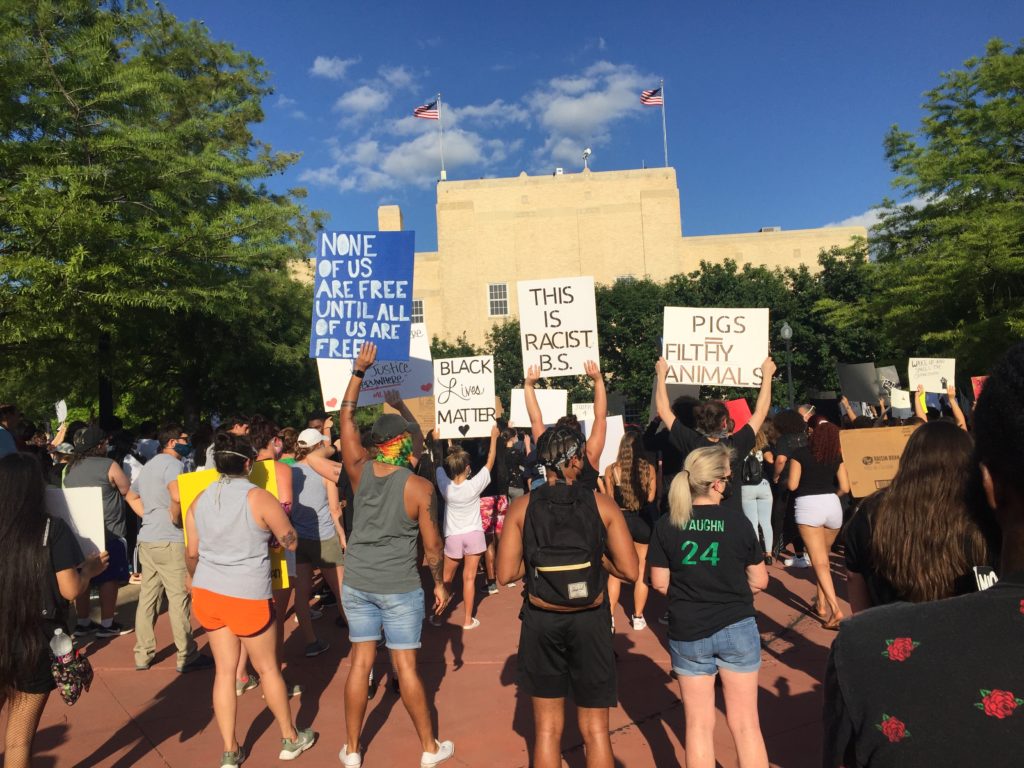 Temple, Texas: signs at the rally for Michael Dean. Photo by Lynn Woolley for WBDaily.

Authorities in my town never seem to put out information unless their backs are to the wall.

I sympathized with the family and recorded three episodes of Planet Logic demanding information and justice – two with Benny Walsh of the NAACP and one with Mayor Tim Davis. Those programs can be heard at PlanetLogic.us. 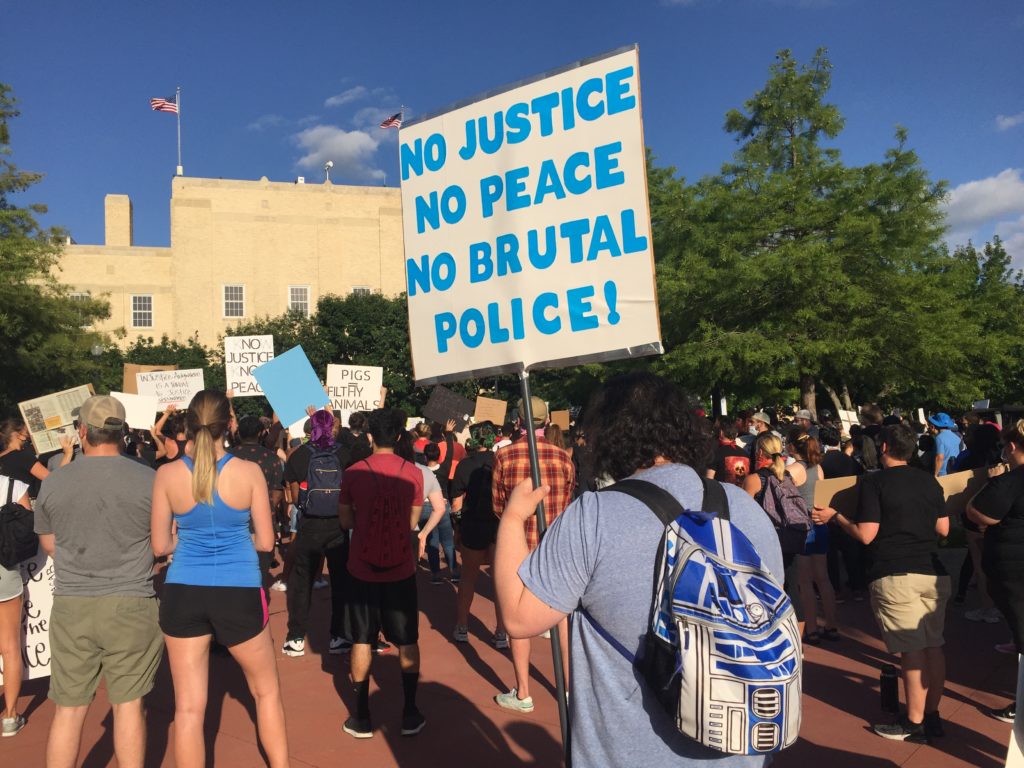 The Friday night protest in Temple was peaceful, though many of the signs were too extreme for my taste. “No justice, no peace” is a call to violence. Another sign read “Pigs – Filthy Animals” – obviously aimed at police. We all know that there are bad cops, and that we need to do something about it – but not all cops are pigs and filthy animals. 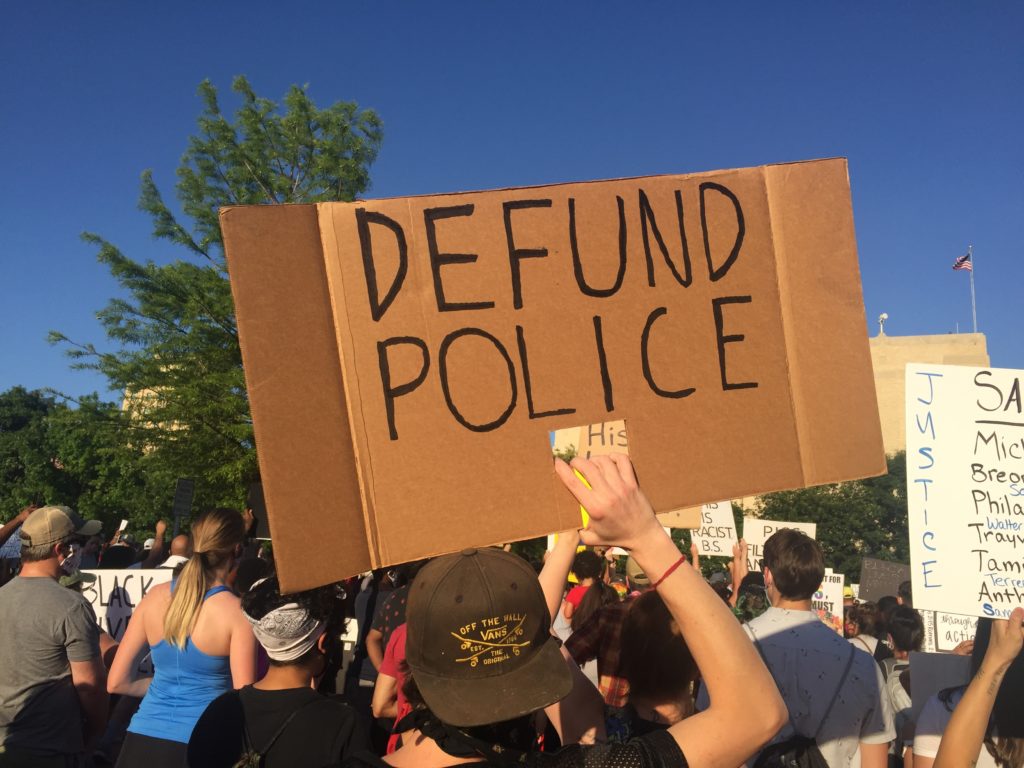 My guess is that these people have very little knowledge of the organization they are promoting — that it seeks to defund police and abolish prisons. If we followed through on that agenda, we could have riots and looting in our cities 365 days a year. But we could not have a peaceful, productive society. Black Lives Matter is an exploitation group that uses a serious grievance to promote a dangerous agenda.

People should know that – but far too many never take the time to research. 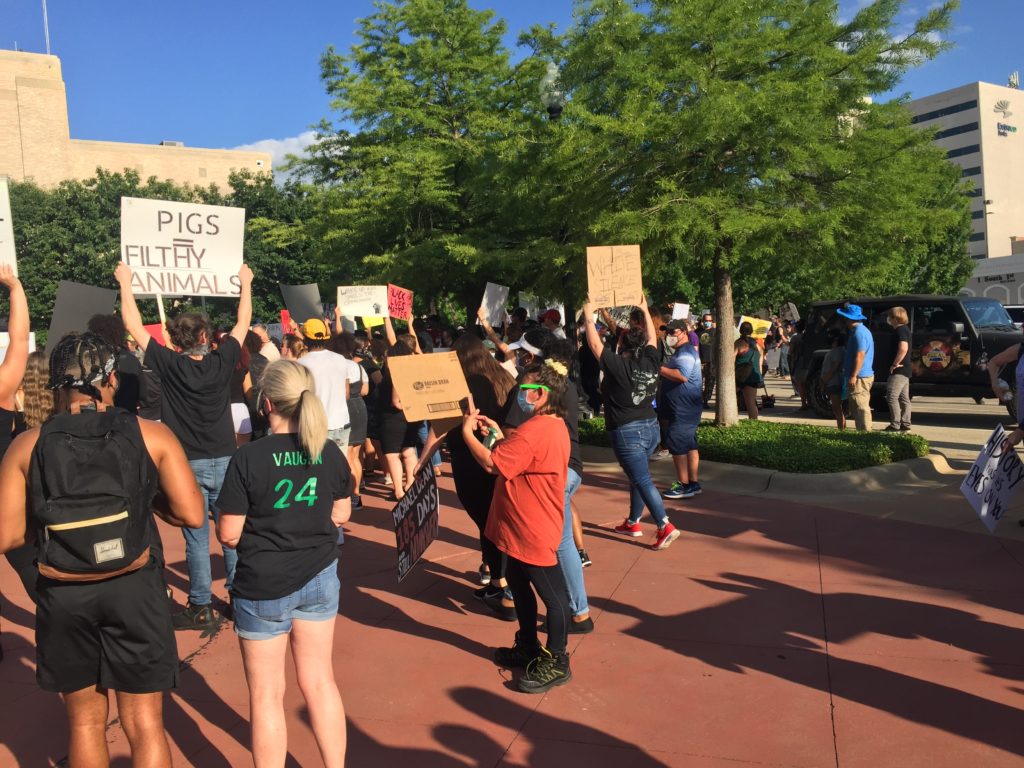 While the Temple protest was underway, cities across they country were still in turmoil over the senseless death of George Floyd. I learned on Friday (from the Temple Daily Telegram) that I had seen Mr. Floyd play football in person. He was a member of the Houston Yates football team that played Temple High School for the state title in 1992 at Texas Memorial Stadium in Austin. What a small world. 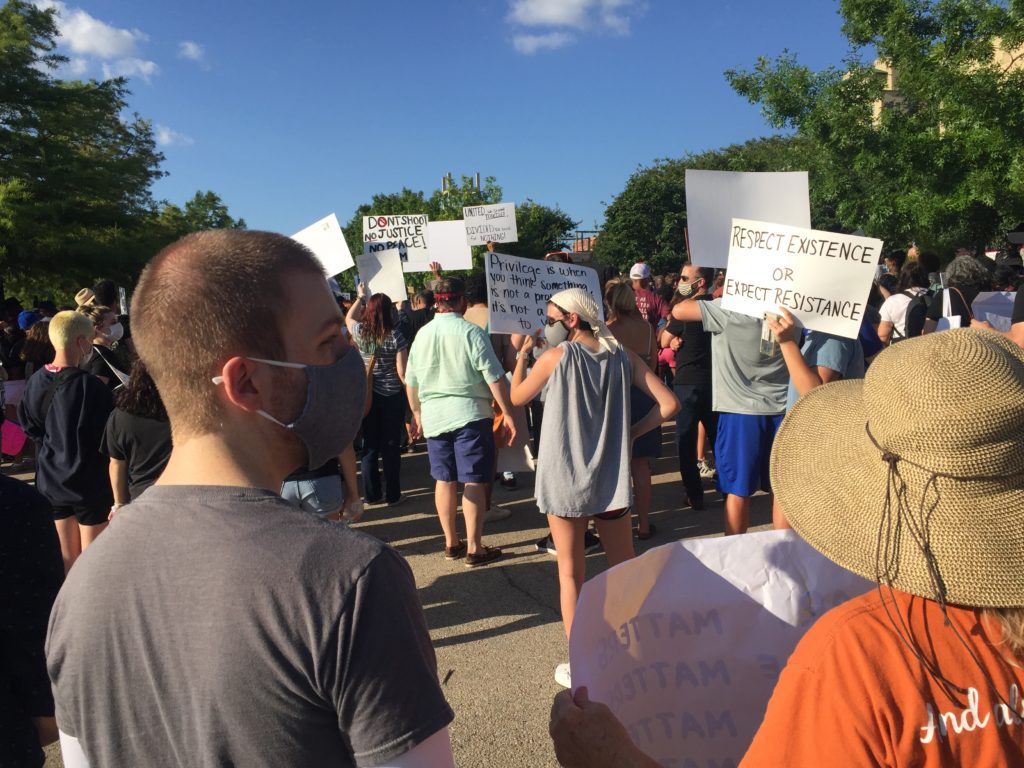 The tragic thing about the deaths of so many black people at the hands of bad cops is that there never was a reason to kill them.

Consider the cases of Michael Dean (Temple), little Tamir Rice (Cleveland), George Floyd (Minneapolis), and Eric Garner (New York.) In Temple, it was a struggle over car keys; the Rice killing was murder most foul; Floyd and Garner were both subdued and no threat to police. This is bad. 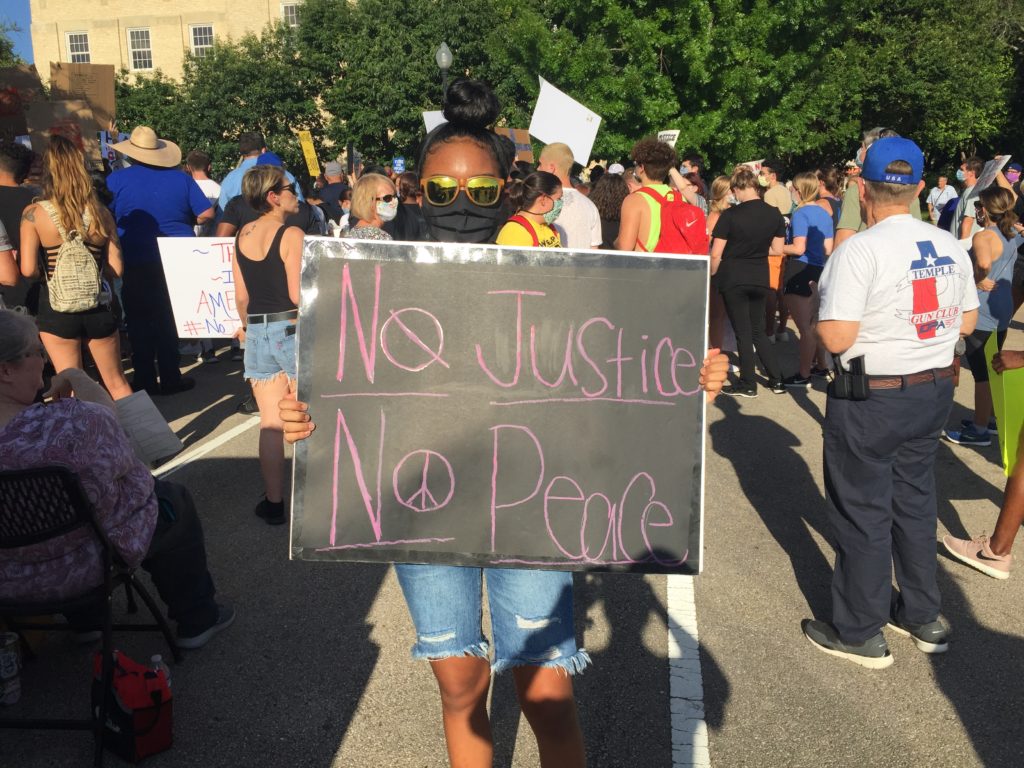 But what about Tony Timpa? Why are there no protests for him?

Mr. Timpa died at the Hands of Dallas police in a similar fashion to the death of George Floyd. In this story from the Dallas Morning News, two other things struck me. First, that the Dallas Police, like the Temple Police, refused to release information. Second, there is no mention in the story that Timpa was white. (You can clearly see that from his photo.)

You can watch the video and hear Tony Timpa – who was drugged-up – screaming, “you’re gonna kill me” over and over. They killed him. White people did not march in the streets of Dallas to demand justice for Tony Timpa. More disturbing, black people didn’t either.

You’d think if “justice” is the goal, Tony Timpa’s life would matter.   But people who say All Lives Matter are branded as racists.   This is life in America today.

No one ever marched for Jenny Garcia or Amber Rice.

Thousands of people in America have been killed or murdered by illegal aliens in America, but no one marches. Only the families and conservative talk show hosts demand justice.

We write all the time about these two cases.

Jenny Garcia was a beautiful young woman who worked at an Austin restaurant with David Diaz Morales who happened to be a once-deported illegal immigrant. He went over to her house and brutally raped her and stabbed her to death. No marches for justice.

Amber Rice was run over and killed by a pickup full of illegal Mexican nationals who abandoned the truck and ran into a field of corn. Amber got no calls for justice. The illegal driver was eventually sent home to Mexico.

When illegals kill Americans, the Left tells us that they kill no more frequently than in the general population. Hundreds of American families that have been touched by illegal alien crimes would disagree. Note that there was no justice for Kate Steinle in San Francisco – nobody marched.

First Question: Why are people more outraged with President Trump’s tough talk about the rioters than with the rioters?

Second Question: Why the outrage over Trump’s threat to use the Insurrection Act since a dozen American presidents have used it?

Third Question: What about Trump’s threat to declare Antifa a domestic terrorist organization, since it is precisely that?

Fourth Question: What’s with the strange outrage over Trump’ s “photo-op” at a church that “peaceful protesters” had set on fire?

Far too much of this is about hatred for Donald Trump – a president who has been a virtual savior for black people. No other modern president has done as much for them, but networks like CNN and newspapers like the New York Times twist the facts.

Black Lives Matter is the opposite of Rule of Law.

Yes, black lives do matter. Even if left-wing protesters disagree, Tony Timpa’s life matters too. Kate Steinle’s life matters.   Racism will never totally be over until all lives are considered sacred. The problem with the Left is that they pick and choose which lives matter.

They don’t give a damn about unborn children. Abortion is a sacrament to the Left. For political expediency, they take away the entire life of a child and they don’t care. The life of an unborn child does not matter.

They don’t care about cop-on-white violence either. It just doesn’t fit the liberal narrative. That’s why there was no justice for Kate or Jennifer or Amber — and there will be no marches for Tony Timpa.