Checks and Balances: Defending Liberty from Concentrations of Power

New York Coronavirus Hell was Real and Nothing was Faked

MANASSAS, VA: I wish I could show everyone the visions I have running though my mind of the hell I saw and was in when I went to New York City. I’m still having flashbacks from it.

I have the horrors of things I saw and choices we had to make and shouldn’t have had to, running on a loop in my brain. Reading about all the climbing numbers [in Texas] back home scares me for y’all. 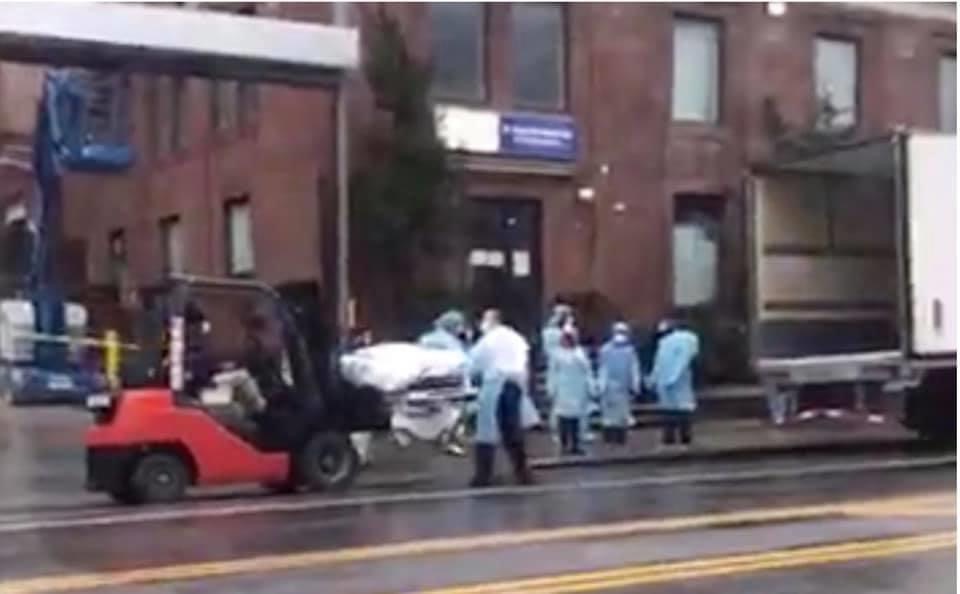 Loading bodies with a fork truck (Photo by Julie Sullivan)

I’ve never seen so many deaths, bodies stacked like Jenga pieces in refrigerated tractor-trailers. There were four of those trailers parked out front of the hospital I was working at. I had to see them every day going into and out of work.

I know so many of you believe it’s a ploy and the numbers were faked. 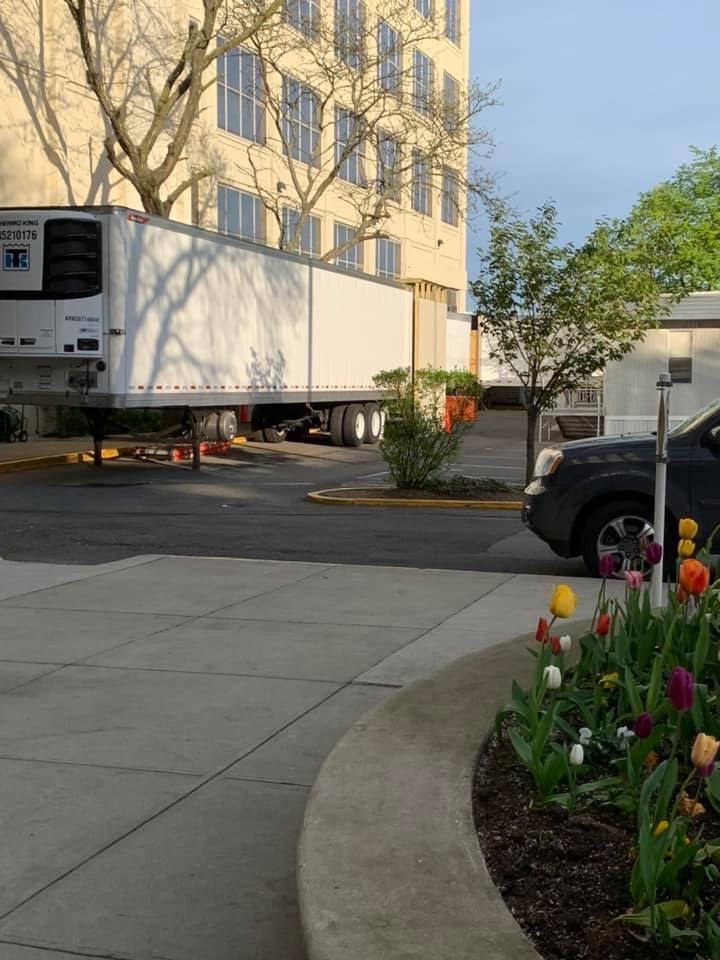 I can tell you and if I knew you personally, I would love to sit down and describe it to you in more detail. Makeshift plastic doors set up to help keep it sealed in units, privacy film scraped off windows so we could see our patients in their rooms, paper bags taped in all the entryways full of our PPE that we had to reuse repeatedly.

The sounds of the overhead codes being called all during our 12 hours shifts, and all over the hospital. Alarms going off constantly. There were hundreds of patients that died horrible deaths, surrounded by strangers. They were people of all ages and ethnicities. And that was only at the facility I worked at.

I don’t know whether wearing masks helps or not.

I often was re-wearing the same one for days at a time, but I did manage to avoid catching the virus. Some of my coworkers weren’t so lucky. Doctors died. Nursing supervisors died, other staff members were out sick for weeks. Eight respiratory therapists got sick, and some of them never came back. There have been hundreds of healthcare workers across the nation I didn’t know that have died in other facilities.

We ran out of equipment, we ran out of protection and it happened quickly and lasted the duration of my time there. We caught up on equipment somewhat, as the tide of patients coming in ebbed. We never had an abundant supply of PPE. I wore the same N95 for my last three weeks there. A lot of you sent me protection — otherwise I don’t know whether my coworkers and I would have avoided getting sick. 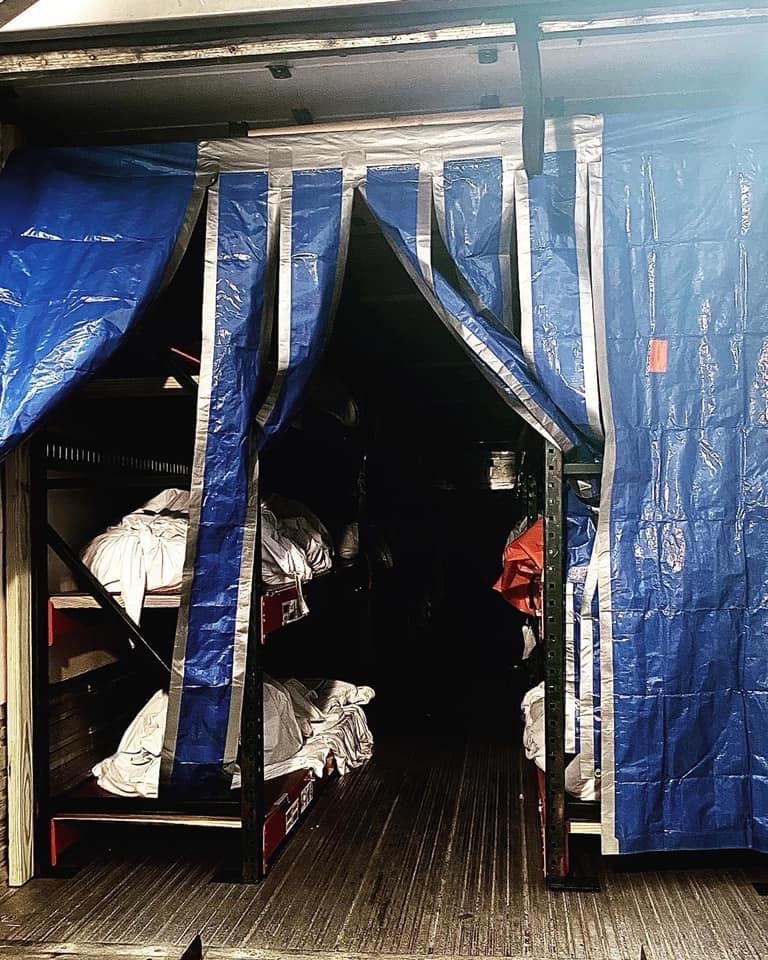 Looking inside a truck stacked with bodies of COVID-19 dead. With a shortage of body bags, the dead were wrapped in the soiled bedding they died in. (Photo by Julie Sullivan)

Out of the hundreds of people on vents, I only know of two people that survived.

No one else I talked to could think of any more survivors. TWO!  Hence the trailers full of bodies.

People keep comparing this to the flu.

Yes it is a flu, but it’s unlike any I’ve ever seen. Unlike any that any of the experts have seen. We just don’t know enough about it.

So what if they had a comorbidity? They wouldn’t be dead if they hadn’t caught COVID. I get sick of hearing that.

Keep in mind, most of the patients I cared for were the sickest of the sick.

They ran out of ICU beds, and had them on telemetry and med/surge units, two to a room. They were each on vents, CRT (dialysis) machines, IV pumps in the double digits crowded in rooms meant for more stable patients. These are not ideal conditions in which to be critically ill. The rooms aren’t set up for that. So remember that when they say, “we have enough beds” that they aren’t the right types of rooms or beds for ventilated, dying patients.

I’m not making this up! I’m not a fear monger. I’m not exaggerating. If anything, I’m minimizing. I can’t violate HIPAA and tell you other details.

Remember also, that not all healthcare workers are trained to care for critically ill patients. It takes a special skill set. They don’t all have the vent management experience it requires. If I hear one more time that a vent is a vent, I think I might scream. They’re not all the same. Ask the RTs came to help but only had home vent experience or were new grads with little to no ICU experience. They didn’t have a clue how to run ICU vents or manage critically ill patients. It takes training, and a lot of it.

Not all of these rooms are negative pressure either.

And this is a must for airborne viruses. That’s what this virus becomes as soon as you’re intubated, on O2, or on a BiPap! This is a respiratory illness that often requires respiratory support and aerosolizes the virus. They had to make these rooms and units negative pressure as best they could. But we basically were swimming in COVID. This is why no visitors are allowed — we can’t keep them safe.

There have always been a very limited amount of negative pressure rooms available at any given facility. So facilities across the globe are doing their best to modify their facilities. It’s not ideal.

I too believe in the constitution and our rights.

I don’t like being told what to do. I love my freedoms. I believe people need to be able to get back to work and support their families. I believe the economy does need to be reopened I personally know people who are not making it right now financially, and it breaks my heart.

But I also don’t like using every resource we have available to us to save a person’s life, and it doesn’t work. And that’s what happened over and over and over for weeks on end. It takes a toll on the caregivers watching, helplessly as so many die.

Remember that there are only so many healthcare workers to take care of all of you.

NYC was completely overwhelmed. People like me came from all over the country by the thousands to help them out. We can’t do that in each state this happens in. There simply aren’t enough of us and we probably couldn’t stay well. The shifts are long and grueling. They’re mentally and physically exhausting.

I’ve dealt with a lot of death in my personal life and in my career — traumatic deaths of babies and children. I thought I was mentally prepared. I was not. No one could be.

I love my home state. I love the people there. I was born and raised there. I’ve lived in Texas my whole life. We have a special pride in our state. I don’t want to read about my former coworkers and friends there succumbing to this illness because they were worn down and over exposed. I don’t want to hear about family and friends dying. 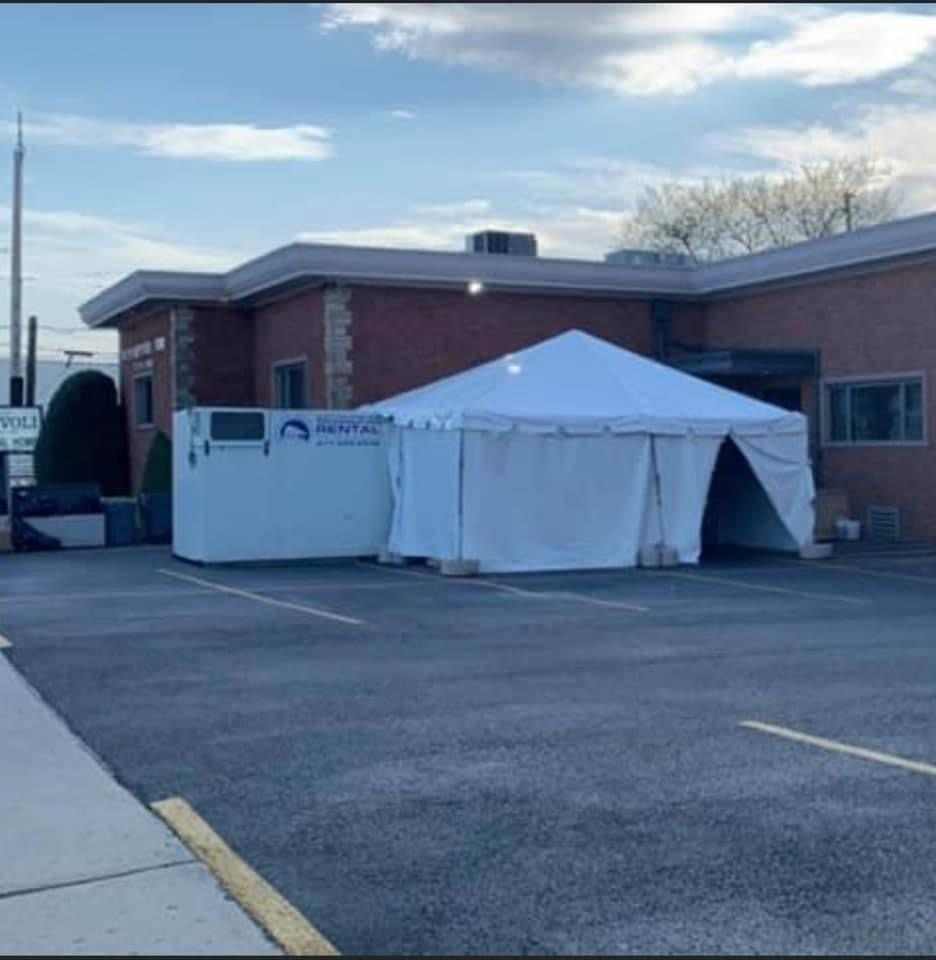 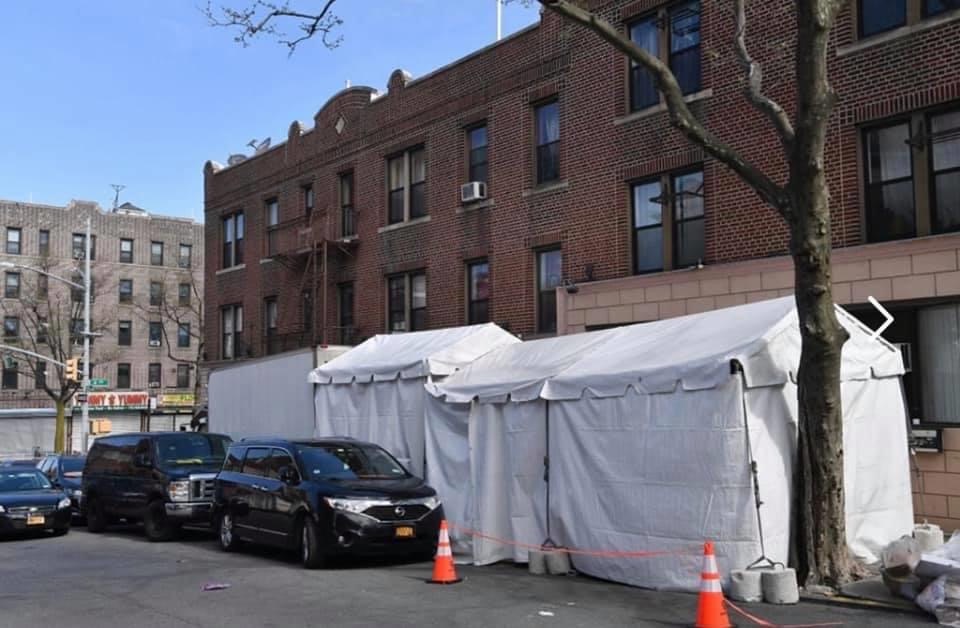 Another view of the tents/morgues (Photo by Julie Sullivan)

Wash your hands, stay distant and be mindful. That’s all I’m asking.

Look at the photos of the trailers out front of my hospital. Also photos of makeshift tents setup outside of funeral homes trying to process the overwhelming amounts of bodies. The bodies that couldn’t be taken to funeral homes were taken to Hart Island and buried in mass graves. These were only a few that I saw along my walking route around the area I stayed in.

Julie Sullivan is a Texas-based Respiratory Therapist and a contributor to WBDaily. She is now on assignment in Manassas, Virginia.