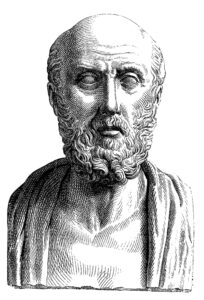 The Greek physician Hippocrates (460–370 BC), to whom the oath is traditionally attributed per Wikipedia. Public domain.

You’re familiar with the Hippocratic Oath that doctors take or at least used to. You know: primum non nocer – first do no harm.

Of course abortion blows that all that to heck, but you’d think that medical ethics would dominate any kind of pledge in nursing school.

At a recent pinning ceremony at the University of Oklahoma, students recited an oath to Planet Earth, social justice and equity, and also to look within and to “identify and eliminate my own implicit biases.”

Personally, I’d prefer my nurse to be caring, competent, and well versed in medical procedures and technology.

Be prepared. That may not be what you get next time you’re in hospital.

[What follows is the most woke portion of the University of Oklahoma pinning ceremony oath from May 14, 2022.]

*
Why would students willingly recite such a silly oath?

There’s an easy answer to that. First, medical schools of all types have become radicalized. Second, the graduates have been fully indoctrinated by the time they reach the pinning ceremony or the graduation. They just don’t see anything wrong with this type of language.

And so the OU nursing students went along with these items seemingly with nary a thought.

I will protect Planet Earth

I will work for social justice and equity

[I will] identify and eliminate my own implicit biases

What does this even mean?

Taken literally, a nurse could not administer any type of treatment that might come from a plastic bottle or syringe that could be considered damaging to Planet Earth.

And I wonder if each of these nursing grads will ask their patients to fill out a survey to ascertain if their ancestors ever owned slaves, or performed in blackface or in a Ku Klux Klan hood as Ralph Northam, the former governor of Virginia has apologized for.

Note to OU nursing grads: If a male named Ralph Northam who claims to have been a governor ever turns up in your hospital, “social justice” says you can refuse treatment. In fact, your oath demands it.

Now this eliminating personal biases thing is even more interesting because it’s all about race. My guess is that the white nurses should look deep into their own souls and should and toss out any biases against black people. But do black nurses have to rid themselves of all the anti-white bias they’ve been taught in college? Do they have to spell “white” with a capital W?

These are the kinds of conundrums that come about when medical ethics are replaced by wokeness.

*
“Medical schools, it’s time to get real about becoming anti-racist”

That is the headline of a column by Taiwo Alonge, dated September 23, 2020. Here’s the key paragraph:

Imagine being told in a medical school interview that your desire to provide care for Black people and patients from marginalized communities would be a “poor use of your medical education.” When this happened to me five years ago, I thought maybe my interviewer was just testing my commitment to this cause, so I politely doubled down. I spoke further about how institutional racism plagues America and how being able to participate in the transformative work to combat it was a major reason I was drawn to a career in medicine.

You’ll have to excuse me because I’m not buying even one little iota of this.

I’m not calling Alonge a liar. I’m just saying that I don’t believe this really happened. But medical students are told this in their classes, and fully indoctrinated into it. In modern America with all our awesome diversity, it makes no sense.

But click on this column and read it, and you’ll see precisely what we are graduating. Would I want to be cared for by this person? Hell no.

People with woke biases have no business treating or caring for anyone.

Wokeness is divisive and dangerous. Nevertheless, it is everywhere in our local schools our colleges and universities, and it has now permeated the medical field.

City Journal, among America’s finest sources of debunking wokeness, ran a piece about “White Coats for Black Queer Abolitionist Socialism.” No; I’m not putting you on. Here’ the opening salvo from that piece by John D. Sailer:

On June 25, 2021, White Coats for Black Lives (WC4BL), a national organization of medical students, published its statement of “vision and values.” The “dominant medical practice in the United States has been built on the dehumanization and exploitation of Black people,” the document read, and WC4BL exists to rid the medical system of this allegedly pervasive racism. Doing so requires not only “dismantling anti-Black racism, white supremacy, capitalism, imperialism, colonialism, and cisheteropatriarchy,” but also “dismantling fatphobia,” embracing “Black queer feminist praxis,” and “unlearning toxic medical knowledge.”

You can break that down into its components that woke liberals despise:

Cis = cisgender, typically known as sexually normal people like most of us.

Hetero = heterosexual, also a normal state of being.

Patriarchy = boys, men, and all males (presumably, except trans males) are bad.

Another way of putting it is that this national organization of medical students despises white, straight males. Does this sound like the “oath” that OU medical students had to recite? Does this make you feel pretty good about the care you’ll get when you’re hospitalized under the care of indoctrinated doctors and nurses coming out of today’s medical schools?

If you think the medical care that we’ll all be getting over the next couple of decades will be state-of-the art and based on longstanding ethical norms, that makes one of us. More likely, it will be based on the color of your skin, your sex, and whether you are gay.

If the anti-tolerant, Marxist Left wants to destroy the greatest nation on Earth, taking over medical schools is a damn good strategy.

First, this book does no harm.  It is perfectly appropriate for any school library.