The “sheltering in place” mandates caused by the coronavirus pandemic forced me to make a stark choice. I could either huddle here at the Mansion and be bored to death, or I could immerse myself in a major project.

I decided to work on a new book!

The Clock Tower and Other Stories was born.

The book is a collection that combines some of my earliest stories, dating back to 1967 with recently-written tales such as the title story. In all, there are 19 stories that include psychological suspense, science fiction, fantasy, and even a comedy or two.

The book is now available for pre-order. You can order it direct from me at https://PlanetLogicPress.Square.Site.

As soon as the book comes out, I’ll fulfill all orders. If you wish to have it signed, please advise me at lwoolley9189@gmail.com. I’ll explain other ways to purchase the book at the end of the column.

That’s a good question and it has a simple answer.

I considered the idea of using the sequestration to arrange and record some of my original songs. That way, I could have a CD or two to sell when I play live music. There are two problems with that.

First is that live music is pretty much dead so long as the pandemic is with us. Second, to record music, I’d need to go into a studio and work with a producer and other musicians.

On the other hand, I could work on a book at home without taking any risks at all. So the book idea started to blossom.

My inventory of stories is growing, and it’s time to publish.

I created a publishing arm that I call Planet Logic Press, and began to choose from more than 30 stories I’d written over the years. I wanted a sampling from each era of my writing history, which I divided into three segments:

I chose The Clock Tower as the lead story because it seemed to resonate with friends who read it, and it lent itself to a cool cover design by Greg Hansen of Tractor Creative out of Waco. (If you need graphics, marketing, or web design, Greg is the best.) The Clock Tower is from the more recent era, and incorporates modern technology in the storyline. 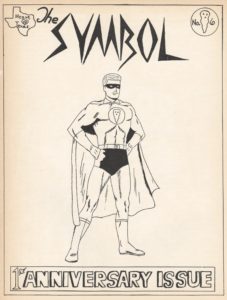 Cover to The Symbol #6 (1966) featuring my superhero “The Ghost.” Art by Gary Lancaster.

In doing my research for this book, I found stories that I barely remembered – some tucked away in file folders and some lost in the pages of an old comic book “fanzine” called “The Symbol” that I used to publish with some of my collector friends.

Of course, the more recent stories were originally written on a computer, so those were easy. Others, I was forced to keystroke, in some cases working from faded hectographed pages of a ‘60s fan magazine.

I literally spent hours keystroking old stories that already been typed twice – one as they were written on an old Royal, and again when I retyped them with a modern electric typewriter, never even imagining the now common marvel of word processing.

Among the files, I rediscovered the following:

Of these stories, six had been published – four in the fanzine, one in Amazing Science Fiction, and one in a magazine called Shadows Of. 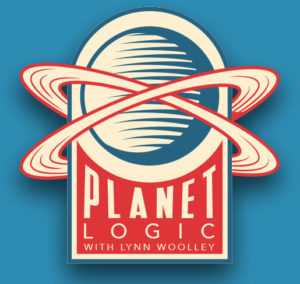 The Clock Tower is the first project from Planet Logic Press.

So stuck at home, I painstakingly transferred it all to computer, and then began the task of finishing stories that had been left undone. I edited all the stories for spelling and grammar, and finished the two novels after working out new plot details.

I also finished plotting the abandoned short story and brought it up to date with a twist ending.

Other stories were dated, and for those I wrote new sequences to make them more readable for a modern audience.

It was grueling work, but it was also fun.

And, as you might expect, while all this was going on, I kept getting ideas, and I wrote two long stories while sheltering in place and doing all this other stuff. That caused me a bit of a problem.

At this point, I had 35 stories and almost 200,000 words in the can, proofed and ready to go. That’s Stephen King length. After discussing it with printers and publishers, I settled on three volumes of which The Clock Tower is the first.

I chose 19 stories for the first book – all suspense, fantasy and science fiction. The second book will deal more with mysteries and private eyes, and the third book will be a trilogy – three related science fiction stories that are longer and more sweeping in scope.

But first comes The Clock Tower and Other Stories.

That’s the tagline for the book, and here’s a synopsis of each story:

How to get your copy of The Clock Tower and Other Stories.

The advent of COVID-19 complicates everything, and so I’ve looked for ways to promote the book at a time when I cannot do speeches at service clubs, a book tour, or hold in-person signings. My local newspaper has indicted they will not do a review, so I’ll have to promote online. I may be able to do a signing at 2nd Street Emporium if we do it outside and socially distance.

Here are the ways to purchase to book:

I have set up a page at Square where all my books are listed.   It will work with any credit or debit card.   You can click on this link to buy:

Once the book is published it will be listed at Amazon as a traditional book and as an e-book. Here is my page at Amazon:

You may also email me to order by credit card.

The cost is $14.95 + $4.50 for postage and the envelope. If you buy multiple copies from me, you’ll only need to pay shipping once for up to 5 copies. The Texas sales tax is 8.25%. I will need your name on the card, type of card, number, expiration date, and the code on the back. I will delete that information once I have shipped the book.

My personal email is: lwoolley9189@gmail.com

If you order from me or through the Square site, you can use my personal email address to request a signed copy.

I hope I’m able to sell a few copies and that you enjoy the book. It was 50 years in the making and I could not be more excited!