In a Friday evening email Temple Mayor Tim Davis announced that the city will “not move forward” with plans to engage Nova Collective, a Diversity, Equity and Inclusion (DEI) consulting company “devoted to transforming organizational cultures.”

The email, per Davis, was sent to all who had contacted him directly and stated how he “wanted to let you know that I have instructed the City Manager to inform the Nova Collective that the City of Temple will not be contracting with them for any services.”

This development comes in the wake of significant public backlash as the city’s residents expressed concerns regarding DEI ideology and the type programs it generally supports. The issues raised were detailed in Witch Hunt? Temple’s Proposed DEI Program to Search Out ‘Unintended Barriers.’ 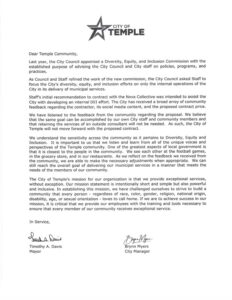 An attached undated letter signed by both Davis and City Manager Brynn Myers accompanied Davis’ email and explained how in the last year “the City Council appointed a Diversity, Equity, and Inclusion Commission with the established purpose of advising the City Council and City staff on policies, programs, and practices.”

As Council and Staff refined the work of the new commission, the City Council asked Staff to focus the City’s diversity, equity, and inclusion efforts on only the internal operations of the City in its delivery of municipal services.

Staff’s initial recommendation to contract with the Nova Collective was intended to assist the City with developing an internal DEI effort. The City has received a broad array of community feedback regarding the contractor, its social media content, and the proposed contract price.

We have listened to the feedback from the community regarding the proposal. We believe that the same goal can be accomplished by our own City staff and community members and that retaining the services of an outside consultant will not be needed. As such, the City of Temple will not move forward with the proposed contract.

We understand the sensitivity across the community as it pertains to Diversity, Equity and Inclusion. It is important to us that we listen and learn from all of the unique voices and perspectives of the Temple community. One of the greatest aspects of local government is that it is closest to the people in the community. We see each other at the football games, in the grocery store, and in our restaurants. As we reflect on the feedback we received from the community, we are able to make the necessary adjustments when appropriate. We can still reach the overall goal of delivering our municipal services in a manner that meets the needs of the members of our community.

The City of Temple’s mission for our organization is that we provide exceptional services, without exception. Our mission statement is intentionally short and simple but also powerful and inclusive. In establishing this mission, we have challenged ourselves to strive to build a community that every person – regardless of race, color, gender, religion, national origin, disability, age, or sexual orientation – loves to call home. If we are to achieve success in our mission, it is critical that we provide our employees with the training and tools necessary to ensure that every member of our community receives exceptional service.

Additional commentary on this matter is available at Political Pursuits: The Podcast.