When libs are gone, who will miss them? Not me.

ISSUE ONE: Say goodbye to Democrats.

It seems counter-intuitive, doesn’t it? Yet Daniel McCarthy, the editor of Modern Age, says the Democratic Party isn’t long for this world. He makes a good case, asking who will replace Joe Biden? I thought about that.

Voters rejected Kamala Harris until Biden forced her back into the spotlight. Beto O’Rourke failed in Texas, as did Julian Castro. And the 78-year-old Biden seems to be the most appealing leader the Dems have. How sad for them.

McCarthy says they had every possible advantage in 2020. A pandemic they blamed on Trump. A sinking economy due to the pandemic they also blamed on Trump. I’ll add that they cheated by changing the rules. Beyond that, McCarthy says progressivism is exhausted. It has nothing but radical ideas springing from gender-studies programs. And each of the radical ideas is failing spectacularly.

When you look at the bankruptcy of ideas in the progressive movement, you begin to understand the big rush to make radical changes.

Joe Biden took less than three months to literally destroy every Trump success. Biden makes everything worse by governing on strict ideology instead of on problem solving as Trump did. He instantly turned the border into a massive crisis. He killed thousands of good jobs.   And he’s spending the country into submission. The Biden agenda is hell on America and even the Left knows it.

To continue this insanity, they must abolish the Senate filibuster, get two new states with four new Democrat senators, abolish the Electoral College, and pack the Supreme Court. They understand they have two years to get this done. If they fail, the mid-term elections in 2022 will kill the progressive movement.

In woke America, there is only one culture that is bad and unworthy of praise – traditional American.

In the town of Troy, Texas a young mixed-race boy decided he wanted to have a hairstyle to reflect his preferred black culture – namely two braids that laid down in the back. But the Troy schools have a rule about that. So the boy was put on in-school suspension for twelve days.

Hair may not seem like a big deal, but when the Texas Association of School Boards (the TASB) gets involved, stupidity isn’t far off. First the ACLU weighed in, and then a federal court made a ruling and then the TASB revised its grooming codes to match. So now we’ll get rules that are equal for boys and girls.

Never mind that in our culture, girls have always worn longer hair than boys. We can’t have gender in this country anymore. If only we didn’t have the TASB. 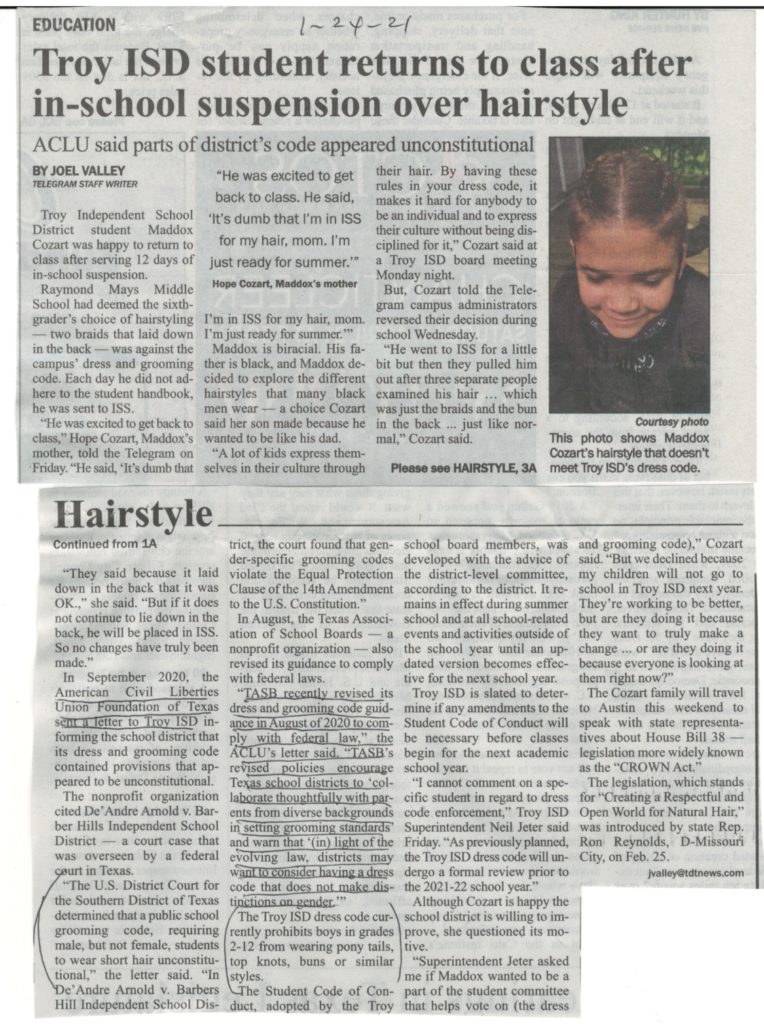