Waco ISD candidate Kincannon “not that experienced in diversity”

Hiring new school superintendents is a messy business. If you don’t believe me, just look at the current situation in Waco that involves a former super that got charged with misdemeanor marijuana possession, and the “lone finalist” to replace him that has an apparent conflict of interest.

If that’s not enough, an African American school trustee says that the presumed new Waco ISD school superintendent is “…not that experienced in diversity.”

Credit this story to Brooke Crum in the Saturday edition of the Waco Tribune Herald. Crum’s piece not only reveals a lot about the supposed conflict of interest that Susan Kincannon may have, but also a lot about how warped the process has become when selecting a new super. Right now, A. Marcus Nelson, who resigned after he was arrested on the drug charge, must be smiling.

Of course, the odorous Texas Association of School boards is involved.

It always is. When a school district in Texas needs to find a new superintendent, the accepted way to do that is to hire a bunch of double-dipping former educators and superintendents who are still cashing in on their former service. That would be “Executive Search Services” of the TASB. In this case, their task was to find a new super to replace the no-longer-acceptable A. Marcus Nelson, who (I imagine) was pitched to the Waco board by the TASB.

So the TASB, according to Crum’s story, reviewed 84 applicants quickly to try to find 5 finalists so that a “lone finalist” could be selected before the start of school. This is perfectly logical in education circles. The TASB always finds great candidates so why not use them again after one of their former selections has been fired? [That was satire.]

It seems that students, parents, board members, and even the candidates themselves pay a price for a wrong choice. But the TASB always makes a nice sum.   It is, in my opinion, an organization that should be shunned.   I’ve written about it before and it is my opinion that it is anti-parent and anti-taxpayer. It even has a program that makes awards to reporters that play nice. School districts and even local newspapers accept the awards as it they were something to be proud of. But an immutable law of journalism is that you do not accept awards from the people you cover.

The conflict of interest.

If TASB’s Executive Search Services was worth the huge fees it charges, it would have ferreted out the fact that former Belton ISD superintendent Susan Kincannon has a business in Waco with none other than Angela Tekell – the board president. Oops. That’s not good. Apparently, Kincannon, Tekell and some other people co-own a house for which they rent rooms at the rate of $295 a night. It’s a little side hustle for a school superintendent to bring in some extra cash before he or she has a shot at getting a job at the TASB after retirement.

Were there red flags? Yeppers! Crum’s story tells us that Tekell disclosed her relationship with Kincannon to all board members individually. The only group left out of the conservation was – the rest of the population of the Waco ISD including parents and taxpayers. Maybe they wouldn’t care. But it would be nice for them to be in the loop.

The TASB does not typically agree.

The TASB conducts its superintendent searches in secret. The TASB is a lobbying organization and it protects the interests of school superintendents. So only the “lone finalist” is ever revealed. This makes it possible for any super in Texas to continually apply for a job at a larger, higher-paying ISD without any worries that his/her own school board will know. Superintendents first!

But many of the “lone finalists” don’t work out. Check out the situation in Marlin, near Waco. I don’t know whether the TASB was involved there, but I always suspect that it was.

Of course race is playing a part in the Waco super search.

While more than one trustee is concerned about the obvious conflict-of-interest, one board member, an African American, says he will vote against Kincannon because she comes from Belton, a predominately white ISD, while Waco is predominately minority. This trustee’s name is Norman Manning. Here’s direct quote from Crum’s article:

“Of course, when the final decision was made Dr. Kincannon was the final choice, but I made it clear I’m not voting for her. I question the point of your coming from a majority white district. This is totally inverse of where she’s coming from. This tells me she is not experienced with diversity.”

I don’t presume to call people racists as CNN and MSNBC are wont to do against Donald Trump who clearly is not one. But this statement seems to me to be the very essence of a racist remark. Is he saying that Kincannon can’t lead the Waco schools because she is the wrong color? For goodness’ sake, this is 2019. 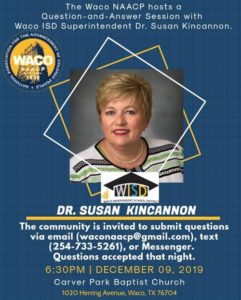 I would also never, ever, never, under any circumstances never, ever use the Executive Search Services of the Texas Association of School Boards ever again. Since I’m king, I’d merge the Temple and Belton districts and the Waco and Midway districts and put an end to the urban-suburban juxtaposition forever. And I’d abolish the Texas Association of School Boards.