If there is a silver lining coming out of the elections in Georgia, it is this: Thank God it was Georgia that turned America into a one-party country, and not Texas.

On the other hand, Texas is on the precipice and if Biden opens the border (which he will), Texas will join Georgia as a blue state. If that happens, our country will circle the drain for a few years and conservatives will work to pull it back.

Maybe we’ll hit rock bottom and have nowhere to go but up.

That is a distinct possibility.

With the Right Reverend Raphael Warnock (who openly hates White people) and Jon Ossoff (who will be the least accomplished person in the Senate since Joe Biden), the Upper Chamber will be tied at 50-50. That means Kamala Harris will break ties.

That also means that New York’s despicable Chuck Schumer will take over as Majority Leader and start to implement the left-wing, anti-American agenda that Biden and The Squad favor. You know – stuff like the Green New Deal, packing the Supreme Court, and making a state out of the District of Columbia. Unlike Republicans, Democrats will work to consolidate their power.

It’s going to be a long time before we see another Republican president.

At my age I will not likely see one in my lifetime. The Dems will enact massive changes (remember Schumer’s threat?) such as adding left-wing states, abolishing the Senate filibuster, and even tossing out the Electoral College.

Trump brought us “America First,” which was so amazingly refreshing after years of Bushes, Clintons, and Obama, but Democrats don’t support our country first. They never have. Some them, like Warnock, appear to hate the USA. 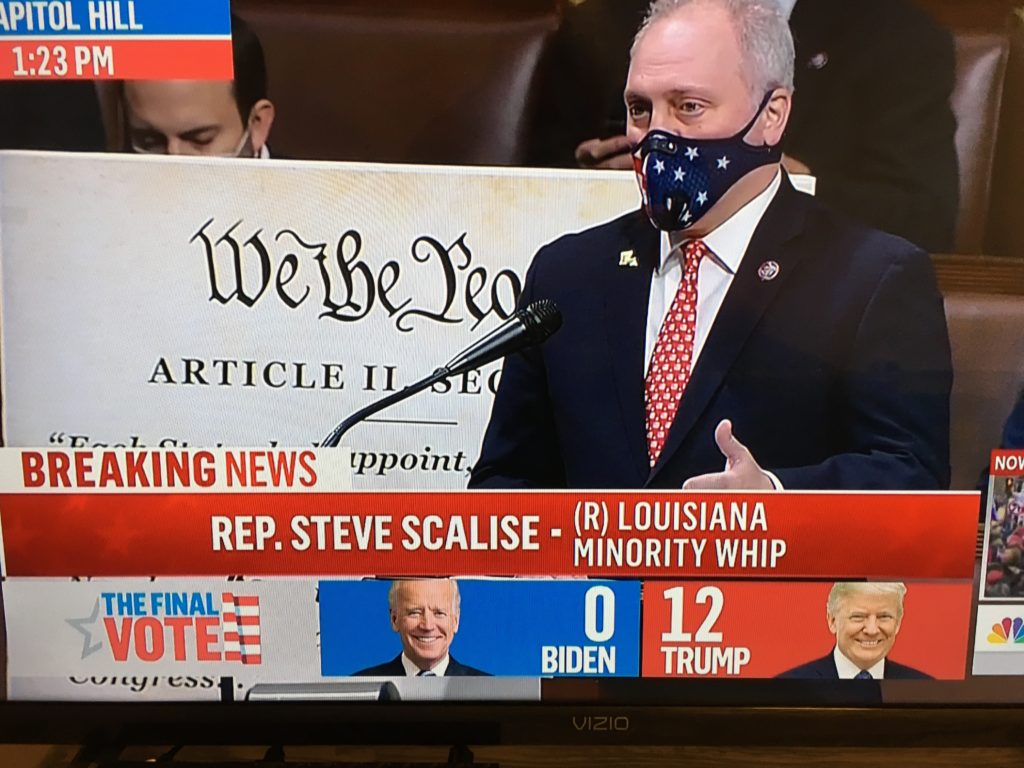 Screen shot of FOX News on 1/6/21, a day of massive protests over the election, and the day Georgia handed the Senate to the Democrats. (Photo by Lynn Woolley or WBDaily)

Now we wonder how big a mess they will make.

Trust me, it will be a disaster, and you and I will pay a heavy price. Biden, like big-city left-wing mayors, will use the pandemic to clamp down on our freedoms. His radical climate change agenda will make our taxes go through the roof and our lives far less comfortable.

I fully expect the Stock Market to crater. Life in America, so amazing under Trumpism, will now add a misery component under Biden. At some point, we will march on Washington to protest what he and the Harris woman person has done.

Gender is in trouble. Pelosi has already banned gender specific terms in official House documents. No he, she, him, her, his, male, female, mother, father – all that’s gone in the U.S. House.

Biden will implement every nutcase idea the Democrats have and out colleges and universities will indoctrinate all it into our young people.

I have no doubt now that Texas will turn blue.

Biden and the Dems will force it.

With Texas’ 38 electoral votes, the Dems will run the country for the foreseeable future. When Texas elects a left-wing governor to replace Greg Abbott, look out. We’ll become California, which is now the most miserable state in the union.

Texas may not be able to stop this from happening. Under Bidenism we’ll have open borders, colleges will never be reformed, and diversity will reign supreme. It is “diversity” that got us where we are. Blacks voted for Warnock in droves because of the color of his skin. That is sad, but looking at the numbers, it’s hard to refute. The Democrats have ushered in an epoch of identity politics that defies logic, but has more power than the Constitution.

The Democrats will blow their chance at absolute power.

They will be corrupted absolutely, and they will overreach. They’ll go too far on climate change laws and regulations, and the people will start to resent them. They’ll lose jobs for Americans with open borders and stupid minimum wage laws.

They’ll give away so much (such as free junior college and free healthcare) that the People will vote for them until it’s apparent that there is no more money and we have borrowed our way into poverty.

Unfortunately for them, Trump will be gone. They will run the White House and both houses on Congress. They will have no one to blame. CNN and the Associated Press will cover for Biden for a while. But sooner or later, they will have to report actual news.

The people very well may rebel.

After four years of Trumpism, with the United States in a golden age of employment and prosperity, the “progressives” will take us backward. Schumer’s threat to take Georgia and then change the country will be fulfilled.

Prior to the pandemic, which was not Trump’s fault, the United States of America was in a major growth period. The economic tide was rising and lifting all boats. Minorities in our country were thriving and working in greater numbers than ever before.

Trump was challenging China for its theft of our intellectual property and he was forcing some of our deadbeat NATO allies to pay their share of their own national defense. Trump defeated ISIS and presided over the demise of several of the world’s most bloodthirsty terrorists. He brought the terrorist state of Iran to its knees.

If Schumer intends to change all that, what the hell is he planning to do to our country? Apparently, he will take Trump’s successes and reverse them. If Schumer succeeds, the rest of us will live to regret it.

Remember, the country thrived under Reagan and Trump, but we had a “misery index” under Carter. Bush and Clinton were a wash, but Obama brought back the misery. How soon we forget. The country typically thrives under strong Republican administrations and declines under left-wing Democrats like Carter, Obama, and Biden.

The good news is this: The Democrats will pass the bills and the President – Biden or Harris — will sign them into law. The Dems in Washington will make the entire country more like California and New York – higher taxes, fewer freedoms, fewer jobs, and more misery.

On the other hand, maybe we’ll all just love the Green New Deal and reparations for slavery, and Biden’s likely appeasement of China and Iran.

Maybe, but not likely.

In any case, whatever the Democrats are going to do, they will do it alone. There will be no Trump, no Republican House or Senate, and not even the same FOX News we conservatives used to love. Even Rush Limbaugh will not be here forever.

Whatever they do, it’s on them.

Whether it ends up being credit or blame, it’s all theirs. I suspect they will take this country straight to Hell. When they do, they will own it, and perhaps the American people will be smart enough to remove them from power.