Deep State May Just Be Wounded

Since May 5th, events indicate Donald Trump has found a way to beat the Deep State at its own game. He nominated a staunch conservative as Director of National Intelligence (DNI) at a time when the Acting DNI may have been worse for the Deep State agenda. Events that have transpired since May 5th are worth an examination because they could represent a new way forward in the battle with the Washington establishment.

Have a look at a very interesting timeline:

Prior to the Senate confirmation of John Ratcliffe as DNI, he belonged to a very small group of anti-Deep State congressmen. Ratcliffe is a conservative and former member of the House Freedom Caucus. If anyone fails to meet the establishment standards for DNI, Ratcliffe is a poster child for it.

Yet, on May 21st, the Senate confirmed his nomination. Ratcliffe now holds the position once held by James Clapper. There was barely a peep from the mainstream media. There certainly wasn’t a Brett Kavanaugh style smear campaign levied by Democrat Senators.

He was essentially confirmed without so much as a whimper. While no Democrats voted in the affirmative, establishment Republicans are the ones who changed their tune on Ratcliffe, compared to last year, when they derailed his nomination and forced him to withdraw it.

For one thing, Democrats indicated they were more concerned with damage being done by Grenell. Via The Hill:

Democrats allowed Ratcliffe’s nomination to skip over procedural hurdles that could have delayed his confirmation until June, in a sign that senators want a Senate-confirmed DNI and that acting DNI Richard Grenell is deeply unpopular.

Grenell should wear that kind of unpopularity as a badge of honor. He threw giant monkey wrenches into the Deep State’s plans. He made the establishment cry “uncle” with Ratcliffe. This should be the formula for Trump moving forward. A strong Acting DNI, AG, FBI Director, CIA Director, etc. is the way to get your nominees through.

He should not choose a Deep State swamp rat just because conventional wisdom says only swamp rats will get confirmed.

We’ve Been Here Before

When disgraced former AG Jeff Sessions was fired in November of 2018, Acting Attorney General Matthew Whitaker replaced him. Whitaker held the position for 100 days. By all accounts, Whitaker had the conservative bonafides to do the job Sessions refused to do.

Unfortunately, he did not. He assumed the role of “placeholder” more than the role of AG. Had Whitaker been more like Grenell, Trump could have appointed someone who is not beholden to the Deep State, as Barr is.

Grenell didn’t even reach 100 days as DNI and did far more in the fight against the Deep State than Whitaker did. Today, Whitaker is on the television circuit promoting his book.

The Power of Grenell’s Satchel

In less than 90 days, Richard Grenell demonstrated the power a mere placeholder can wield. He assumed the role of Acting Director of National Intelligence (DNI) on February 20, 2020.

Grenell may have held the title of Acting DNI but he acted like a real one.

As Grenell was carrying satchels of documents to the DOJ and declassifying other documents that did real damage to the Deep State, Ratcliffe was seen by that same Deep State as the better option.

As such, the Deep State moved quickly to confirm him. 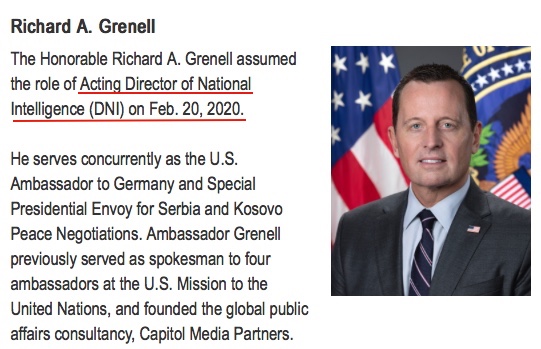