AG Barr and Durham Are Stalling

Recent history and evidence suggests that Attorney General William Barr and U.S. Attorney John Durham are stalling. They are trying to run out the clock on the public’s demand for justice. If there is a deep state formula for drawing out investigations and then finding no accountability, Barr and Durham are following it so far.

That formula? Allow investigations to drag on – usually between one to two years – and ultimately conclude that nothing of consequence need be done.

Let’s consider some examples over the last five years:

Hungry patriots demanding justice are constantly let down and told to wait for another investigation. The latest incarnation of this is the investigation of U.S. Attorney John Durham and Attorney General Barr.

The best indication of future behavior is past behavior. Indications are that Durham and Barr will follow suit. They are buying time, reading tea leaves and waiting until the right time to thread the proverbial needle. This is conjecture, yes, but it’s also backed up by the Deep State’s track record.

In May of 2019, Barr announced that Durham would be investigating the origins of alleged Russian interference in the 2016 Presidential election. The implication was that Durham would get to the bottom of what the Obama DOJ did to spy on the campaign of then candidate Donald Trump and later President Trump’s administration.

In December, Barr intimated that Durham’s findings would reach a crescendo in late spring or early summer. That timeline is coincidentally similar to all the others mentioned above. As patriots sit back and hope, Barr and Durham are following the formula that others before them have followed.

In November of 2017, Trump nominated Durham as U.S. Atty for Connecticut on the recommendation of very liberal Senators Richard Blumenthal (D-CT) and Chris Murphy (D-CT). 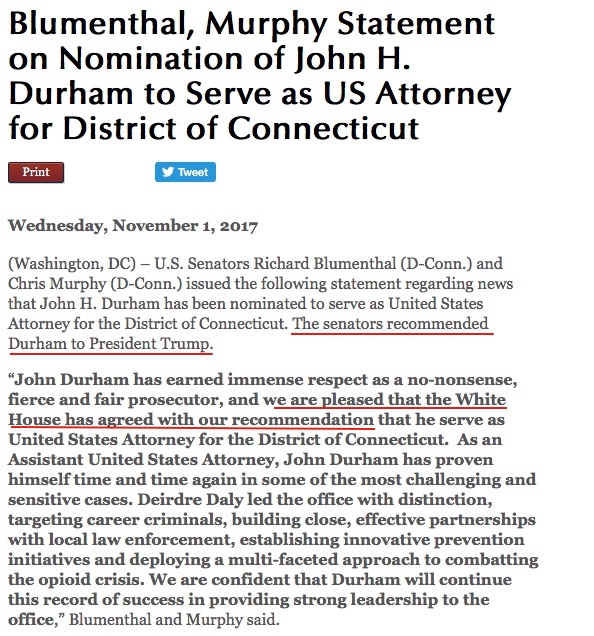 To true patriots, this should be a red flag. If Blumenthal and Murphy were comfortable recommending Durham, it should have caused Trump to be uncomfortable with him.

Barr has his own Deep State problems. In the 1980’s, he was a fixer for George H.W. Bush. Allegedly, Barr went by the CIA codename Robert Johnson and helped run damage control in Mena, AR when Bill Clinton was the Governor of that state.

Either way, those placing hope in the investigation of Barr and Durham should instead be skeptical. They should demand accountability from this Deep State duo now, before the window of opportunity closes once they close the book on the investigation.