Know how much local government bond debt for which you are responsible? Probably not, but it seems a good thing to learn as two local school districts – Belton and Temple ISDs – want taxpayers to approve new bond packages, packages financed over decades that will add to the area’s already considerable debt load. 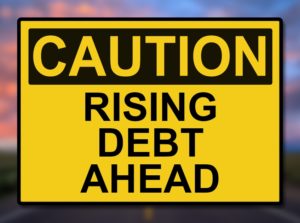 Graphic by Alex Anderson for WBDaily.

Happy talk can be effective – especially in soft selling new debt. Rates can be promoted as a number of cents (maybe 10 or so) per $100 of taxable property value or as rates of “$1.48 per month increase in property taxes for a home valued at $100,000.” Many voters will respond positively to numbers that sound reasonable, modest. But are they getting the full picture?

While these amounts can be factually accurate, they simultaneously distract from a larger view of the real debt being assumed, how it impacts a local governments’ (i.e. taxpayers’) existing debt commitments and subsequently, their overall financial status. For those believing in fiscal responsibility, this can lead down a dangerous road.

Don’t feel bad if you don’t know our current debt levels. Many taxpayers don’t. You’d think our local officials would – especially the ones asking for your approval of bond debt they’re promoting.

It doesn’t, however, always happen that way as demonstrated last year by Temple ISD Superintendent Bobby Ott during an exchange that took place at an Oct. 12 public meeting held weeks prior to the district’s November bond election.

Between two separate bond proposals, the district was seeking a total of $184.9 million in new bond principal (closer to $260 million with estimated interest). Wouldn’t discussing these proposals with regard to existing debt be a sensible move?  After all, with then-current debt at $264.7 million, this additional amount would have functionally doubled the district’s debt.

Did he truly not know the district’s current debt level? Or did he just not want to say? Either option has troubling implications and fails to inspire confidence or trust.

Both packages were rejected by voters. The smaller package was soundly defeated while the larger ultimately went down by at least two votes and perhaps a few more. TISD has been close-mouthed about the final numbers of a recount.

Note #1 to ALL school districts: include current debt loads in your bond campaign talking points. It may not be helpful in making your case, but it’s your duty and transparency that’s owed to the public.

Meanwhile, the May 7 election will have Belton ISD asking for approval of two bond packages totaling a base amount of $173.8 million. With an estimated 40% interest added, the number rises to approximately $243.3 million.

Temple ISD is back again with a slightly pared down $164.8 million package ($230.7 million with estimated interest).

Note #2 to ALL school districts: including estimated interest with the principal is another good add to the bond campaign talking points. Perhaps also not helpful to your case, but again, we’re either about transparency or we’re not.

And one final point. Doesn’t making a significant purchase often entail reviewing your overall financial status? Not just one piece? Prior to making a major home purchase (significant remodeling, furniture, appliances, etc.), don’t people often factor in how this additional cost might impact existing commitments such as a mortgage, car payment, student loans, insurance expenses, other consumer debt and more? Why would we not do the same when considering new local government bond debt?

Note #3 to ALL school districts: don’t be surprised when financially frustrated voters become more discerning and even demanding regarding “big picture” debt levels – especially as our current economic malaise shows no signs of retreat.

Local government debt numbers supplied by the Texas Bond Review Board for FY 2021 (Sept. 1, 2020 through Aug. 31, 2021) were featured in a recent column on this subject. The article also pointed out that Texas taxpayers now have local government debt – debt from cities, counties, school districts, community/junior colleges and special districts – totaling $389.7 billion, a $14 billion increase from FY 2020.

Per the Texas Public Policy Foundation, “On a per capita basis, local governments have now borrowed so much that each man, woman, and child in the Lone Star State effectively owes $13,500 for his or her share.” 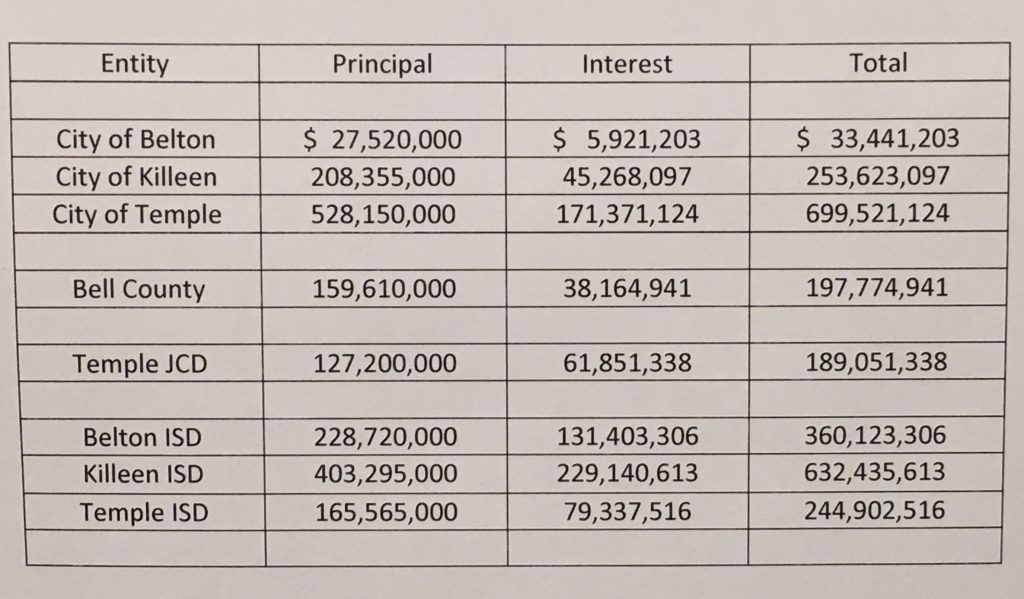 These numbers importantly reflect principal and interest because, as discussed above, government entities use bond campaigns to typically talk about principal with no interest mentioned. Indeed, the “ask” looks better as interest is additional (i.e., hidden) debt accrued from the cost of borrowing money. With bonds, interest is often an additional 40 to 50% of the principal. Principal-only figures create a deceptive view of actual debt levels proposed. The public deserves better.

So how did our local districts fare with these new numbers?

Going into the May election, Belton ISD has $360.1 million existing debt. Passage of the proposed bond would increase that debt level to approximately $603.4 million.

Temple ISD has $244.9 million existing debt. Passage of the proposed package would increase its debt level to approximately $475.6.

Relatively speaking, these aren’t small increases. Amazing the difference inclusion of the interest makes. It’s a much-needed view of reality that shouldn’t be subjected to gamesmanship by educrats or any other government entities seeking bond or any other taxpayer approvals.

Moving on to the bigger picture

Using this data, many Bell County residents can determine their total local government debt burdens. For instance, taxpayers living in the City of Belton, Bell County, Belton ISD and Temple JCD have a total debt level of $780.2 million. With passage of the BISD bond, that debt level will likely grow to almost $1.02 billion.

A taxpayer living in the City of Temple, Bell County, Belton ISD and Temple JCD has a total debt level of $1.45 billion. With passage of the BISD bond, that debt level will likely become almost $1.7 billion.

Taxpayers in the City of Temple, Bell County, Temple ISD and Temple JCD have a total debt level of $1.33 billion. Passage of the TISD bond will see that debt level likely grow to almost $1.56 billion.

These numbers are significant and, in these turbulent economic times, voters need good information to determine their support or opposition to new government debt.

My column Texas Sees Rise In Local Government Spending Fever, Affluenza Outbreaks; Bell County No Exception was written as a primer to the upcoming bond election season. It remains timely and provides additional detailed information on bond debt as well as instruction on verifying debt information and searching the Texas Bond Review Board database to gather similar information on other entities.

For further perspective, Lynn Woolley’s Temple, Texas School District not taking “no” for an answer with failure of Bond Issue” column poses great questions applicable to most any school bond election.

The Affluenza column ended with these thoughts.

Governments don’t necessarily want taxpayers to know what’s being done in their name, with their dollars or at their alleged behest. With that, arming yourself and sharing this knowledge is the best path toward breaking spending fevers and quelling affluenza surges so as to ensure a healthy degree of fiscal responsibility within our local governments.

The thoughts are still quite relevant.