Why Democrats are Giddy about Mail-In Voting

With the advent of COVID-19 (CCP Virus) comes opportunities for political parties to grab advantages that would have been impossible under normal circumstances.   Republicans may grumble about Democrats adding a left-wing wish list to the coronavirus rescue bill – but that pales in comparison to the concept of mail-in voting.

The Democrats love anything that makes voting easier.  They back such measures as Motor Voter (registering to vote when obtaining or renewing a driver’s license), on-line voting, rolling polling (moving portable voting boxes to venues that are friendly to the cause such as voting on a school bond issue at a PTA meeting), and mail-in voting.  The mandate of social distancing is a golden opportunity for Democrats. 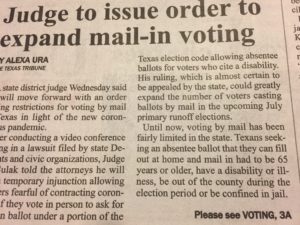 Democrats want to expand the universe of people who vote.

This sounds like a good thing, right?  We’re always encouraged to vote.  We’re told that the more people who vote, the stronger “our democracy” is.    We use the quotes because Democrats seem to have discovered the concept of democracy since Donald Trump came to power – and they have become frequent users of the term.

There are reasons that many people believe that expanding the voter universe could have adverse effects.  Let’s divide voters into three groups.

Group 1 is that segment of Americans that is entirely engaged.

They may be Republicans or Democrats, and they may watch FOX News or CNN – but they know the issues.  You can ask them about climate change or border security, and they’ll not only have an opinion – they can back it up with facts.   A great deal of this group still reads a daily newspaper – either in print or online.

Members of this group disagree often and sometimes loudly, but they are passionate and believe they know what’s best for our country.  They may see the United States as exceptional, or a county with a history steeped in racism.  Whatever they tend to believe, they care about issues and they vote.

Group 2 is that segment that tangentially knows what’s going on.

They follow some news, but are not obsessed with it.  A typical night’s TV viewing is a police drama or a science-fiction show from a streaming network.  The three network newscasts are not part of their lives, nor is a daily newspaper.  Shows like “60 Minutes” bore them, and they’d rather watch sports or celebrity news.  They consider Cable News networks to be a bunch of obnoxious partisans engaging in never-ending arguments.

They like the President and will vote for him – or they don’t and they won’t.  But don’t ask them why.  A lot of folks in this group vote and a lot don’t.

Group 3 is comprised of people at the bottom end of the voting scale.

Most don’t vote because they are completely uninterested in current events and politics.  Some believe that politicians will do what they do regardless, and so voting is a waste of time.  Young people, especially those of college age, may have been indoctrinated by liberal professors to hate conservatism (and possibly even America), but still, many refuse to take the time to go to the polls.

People in Group 3 get their news from social media – and that means they may be getting real news, or a political agenda.  Young people in this group take pride in never having read a printed newspaper.  They seem to have a group-wide belief that reading anything in print would damage them in the eyes of their peers.  Anything they can’t do on their phone, they don’t do.  They would far prefer to purchase clothes online than actually try them on in a store.  The more they can do virtually, the better they like it.

Older people in this group may be homebound, chronically ill, in nursing homes, or otherwise cut off from daily travel.  They are easily influenced and, like the young, they skew to the Left.  While young people have been politically corrupted by professors and social media, older folks have a constant fear that Republicans will take away their government benefits.  Most of this group would vote for Democrats if they voted, but most don’t.

Now you can see why mail-in voting is so important to Democrats.

Group 1 is engaged and will vote, and is hard to control.  Group 2 represents an expansion of voting for Democrats if you could get more of them to vote.  Group 3 can be totally manipulated and represents a near-total domination of elections by the Left—if there is a way to get them to vote without the slightest bit of effort on their part.  That’s why an expansion of the voting universe will always benefit Democrats.

Note too, that any form of voting that can be done without showing up at a polling place makes it easier to vote without an ID.  That makes fraud far easier and fraud is virtually always beneficial to Democrats.   That’s why they charge “racism” when Republicans attempt to pass voter ID laws.

Republicans and conservatives have always thought that voting should carry with it some responsibility on the part of the voter.  Poll taxes are a thing of the past, as they should be.  But registering to vote is not hard – even without left-wing laws like Motor Voter.  Understanding basic issues is not hard, but Democrats encourage ALL people to vote, even illegal aliens, because the uniformed usually vote for them.

Democrats and the concept of “ballot harvesting.”

This is another way that the Democratic Party can obtain an edge over Republicans.  Simply put, ballot harvesting is the practice of allowing political operatives to gather up ballots and take them to polling places to be counted.  Somehow, only certain ballots are likely to show up – and most of those are marked with the letter D.

When ballot harvesting is allowed – as it is in 24 states and the District of Columbia – Democrats can turn red counties into blue overnight.  That’s what happened in Orange County, California, which is a Republican stronghold in a left-wing state.  After Governor Jerry Brown signed AB1921 into law in 2016, allowing ballot harvesting, Orange County flipped.  After 250,000 vote-by-mail ballots were counted, every house seat in the county went Democratic, according to the San Francisco Chronicle.

RealClear Investigations says ballot harvesting is prevalent in Florida (called boleteros) and in Texas (called politiqueras), which partially explains why Texas isn’t as Republican as it used to be.

Watch out for left-wing judges.

Liberal groups are suing, demanding that the courts lift all restrictions on mail-in voting because of COVID-19.  Left-wing judges will not allow a good crisis go to waste.  Just like with Motor Voter, rolling polling, ballot harvesting, and other left-wing schemes designed to elect Democrats, mail-in voting is a serious threat to “our democracy.”

President Trump issued a tweet about this on April 14th.  The President said:

“GET RID OF BALLOT HARVESTING, IT IS RAMPANT WITH FRAUD.  THE USA MUST HAVE VOTER I.D., THE ONLY WAY TO GET AN HONEST COUNT.”

By his use of upper-case letters, the President was screaming this message.  That’s precisely what all thinking Americans should do.

Lynn Woolley is a Texas-based writer at WBDaily.com and podcaster at PlanetLogic.us.  Email Lynn at lwoolley9189@gmail.com.