Trump did what Reagan could not with Supreme Court picks

Maybe it’s because the Left fights so hard to stop true conservatives from being on the High Court – but Republican presidents have a terrible record on their appointments. 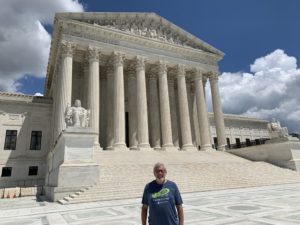 Equal justice under law is a phrase engraved on the West Pediment, above the front entrance of the United States Supreme Court building in Washington D.C. Photo: The author on June 21, 2020. (Photo by Julie Sullivan for WBDaily)

Even the great Ronald Reagan, who like Trump got three picks, delivered only one true conservative.

Left-wing presidents always choose leftists who claim during hearings to be focused on the law, but then become reliable liberal justices. Trump’s appointments broke the mold and have forged a new path for the Supreme Court – one that follows the Constitution and the law.

Donald Trump simply named three people to the Court who pledged fealty to the Constitution – and who kept that promise.

Supreme Court decisions should typically be 9-0.

Why? Because justices of the nation’s highest court are not supposed to be politicians or activists. Any third grader can read the Constitution and report back to you that there is no right to abortion, and certainly no right to privacy that would allow anyone to kill a baby in the womb.

Roe v. Wade should never have been the so-called “law of the land,” and Dobbs v. Jackson Women’s Health Organization should have been a slam-dunk. In the first place, constitutional separation of powers prevents any court from making law, and second, Roe v. Wade was in effect for almost five decades because of timid or outright wrong Supreme Court appointments made by Republican presidents going back to Richard M. Nixon.

We’ve seen a virtual cornucopia of weak appointments made over the years.

As commentator and columnist Marc Thiessen has written about, Republican presidents have a far different track record from Democrats. From Carter to Clinton to Obama to Biden, Democrats seek out left-wing ideologues who have more interest in activism than in constitutional law.

When Biden nominated Ketanji Brown Jackson to the Court, he knew that no matter what she said during the hearings, she would always be a dependable liberal vote on the bench – like Kagan and Sotomayor, a virtual rubber stamp. And so it goes with left-wing justices who believe in “a woman’s right to choose.” They are activists and vote in accordance with their left-wing views.

It hasn’t been that way for Republicans.

Richard M. Nixon gave us Harry A. Blackmun who went on to be the author of Roe v. Wade.

Gerald Ford nominated John Paul Stevens who turned out to be a liberal icon.

Ronald Reagan served up two “moderates” – Sandra Day O’Connor (who was historic if not dependable), and Anthony M. Kennedy. Both were considered “swing votes,” a name for a Republican appointee that can’t be trusted. To his credit, Reagan also gave us Antonin Scalia, perhaps the most brilliant jurist of our time.

George W. Bush hit a home run with Samuel A. Alito, but then stuck the country with Chief Justice John G. Roberts who likes to create law from the bench in direct opposition to his enumerated powers. He illegally saved Obamacare, preserved Obama’s Deferred Action for Childhood Arrivals (DACA), and supported striking down state laws that required hospitals to extend admitting privileges for abortionists. To this day, Roberts worries more about process than law, and acts as though he has never read the Constitution.

Then came Trump, and he gave us the hat trick.

Trump made a list of people he might nominate and politicos and regular people alike had a chance to scrutinize it, and then Trump made his choices from that list: Neil M. Gorsuch, Brett M. Kavanaugh, and Amy Coney Barrett. (It was those first two picks that Senate Majority Leader Chuck Schumer seemed to threaten at a pro-abortion protest in front of the Supreme Court building.

Neither of the justices blinked, and so far there have been no congressional hearings into Schumer’s threats.)

There are things not to like about most justices – and Kavanaugh certainly falls into this group – but when it comes to having the fortitude to strike down a bad decision such as Roe v. Wade, Trump got it done. He did what Nixon, Ford, Reagan Bush, and Bush could not.

As Thiessen says, Trump will go down in history as our most pro-life president. Babies will still be destroyed in California, and woke companies will fly “pregnant people” to legal abortion states, but Trump accomplished two things:

First, he returned the High Court to making decisions based on the Constitution and not on personal political opinions.

Second, he saved the lives of babies whose mothers will decide to allow them to be born rather than to endure the hassle of heading to another state to have an abortion. This will not save all, but it will matter to those children who are allowed by their mothers to live.

And now let’s have a conversation about humanity.

One of two things is true. Either babies in the womb are not human, or they are. The Left needs to really think about this – and note that every single judge or protester who supports abortion has been born. Dead babies never grow up to become Supreme Court nominees.

Every leftist in America ought to watch a late term abortion on video and see what happens. Every college professor who thinks they/them has all the answers should consider the great responsibility of indoctrinating students either to respect life – or to stand out in front of state capitols demanding the right to kill.

If it is inhuman to shoot up a school, a hospital, a post office, or a Fourth of July parade, then how is it acceptable to kill babies that have already formed in the womb?

Maybe when we can define “woman,” agree that a person’s sex is determined at birth, admit that traditional mother/father families are what made America great, and name a judiciary that adheres to the Constitution, we will be on our way to restoring the sanctity of life that was present in the America I grew up in.

President Trump has given us a pathway. No other Republican president and certainly no Democrat has done as much for the preservation of life.