This is How Nations Collapse

Americans may not have realized it, but Monday June 1 was an amazing day in media.

Rush Limbaugh, stricken with lung cancer, made an unprecedented attempt at understanding and healing in the wake of a murder-by policeman in Minneapolis and the anarchy that has followed. 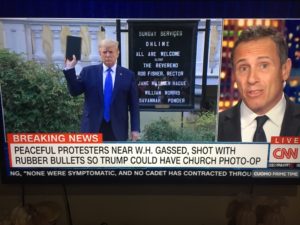 CNN, in its primetime reporting on what it typically refers to as “peaceful demonstrators,” left no stone unturned in its continuing crusade to smear Donald Trump in any way possible.

On CNN, it began with Anderson Cooper and Jim Acosta and continued in to Chris Cuomo’s show — three CNNers that understand their CEO, Jeff Zucker and know which side of their bread is buttered.

Tucker Carlson on FOX News preached a sermon. It was long, but meaty. It is worth seeing several times.  He said:

This is how nations collapse.

He went on to show clip after clip of CNN’s “peaceful protesters” destroying property, beating people with boards and rocks and taking great delight in looting and stealing other people’s property. And all this was in the name of George Floyd – whose brother pleaded for them to stop.

There is no easy key to understanding.

Listening to just a clip of the Rush Limbaugh interview with the “Breakfast Club,” a morning drive syndicated radio show that’s popular with black audiences, you can see that the two sides have a chasm. The rivers between them are deep.

As Rush is trying to explain how America is a land of opportunity, “Charlemagne the god” is telling him that it’s only so for white people. It was sad to listen to this – because opinions were cemented in.

Rush, from the bottom of his heart, was trying to build a bridge. The hosts of the Breakfast Club remained committed to their narrative. I’m glad Rush tried, but it came to nothing.

CNN is a sick network 24 hours a day.

It’s hard to describe CNN. If the anarchists are known as Antifa, CNN is Antidon.

The network has an open and unbridled hatred for the man in the White House. If the Breakfast Club sees white police officers as the devil, then CNN is seeing the Prince of Evil in the President of the United States.

CNN used graphics to demean Trump for a “photo-op” at a church while praising the protesters as peaceful. This constituted much of their Monday night primetime.

There was nothing Trump did or could have done to please them. The network is suffering from a sickness comprised of left-wing political views tainted with pure hatred for one man.

Its goal is not truth as Jeff Zucker maintains, but the complete destruction of a presidency.

Tucker Carlson is not afraid of the truth.

At the exact same time that CNN was slandering Trump in every conceivable manner, “Tucker Carlson Tonight” presented the best monologue about the current situation that you’ll see. He pulled no punches about the dirty cops. He explained how our leaders are failing us – even to a rational and reasonable critique of Trump. He showed the violence that CNN will not show. He provided logical answers and solutions.

Early in his monologue, he made the statement about how nations collapse. That stuck with he through the night and into this morning. How absolutely correct he is.

This really isn’t all that complicated.

We have bad cops in America – apparently a great deal of them, and we must fix it and fix it now! But when constitutional protests turn into a mob and sweep the nation with anarchy, they must be stopped in place. Those who pillage, loot, set fires, and assault or kill others must be arrested and brought to justice.

I think President Trump should name a commission to come up with the best ways to reform rogue police departments such as what we saw in Minneapolis.   It can’t be all talk. We have to do it – make it so. 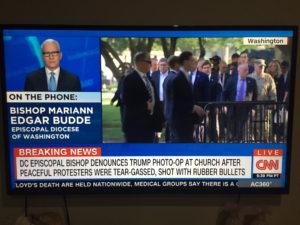 The urban community should listen to what Rush Limbaugh was trying to say.

America has showered them with opportunity. We’ve provided Affirmative Action, college educations, departments of Inclusion and Diversity – and for what?  Stop watching CNN and MSNBC; those networks are working hard to split us into two nations.

CNN would do anything, report anything, and lie all night long if it would harm Trump. CNN has used the Russian Collusion hoax, the Ukrainian phone call, coronavirus, and now this terrible situation in Minneapolis to directly attack one man.

The more violence we see in streets, the better the left-wing media likes it. They want us to hate each other over race – and they’re getting their way. This is how nations collapse.