They Said It Was Only One Man

This is what I remember.

By the time the world knew that President Kennedy was dead, I was in Mr. Winslow’s 8th grade science class at Travis Junior High School in Temple, Texas. The class calmly discussed the news, mostly relating to where the shooting took place and the nature of the wounds. We did not discuss the political atmosphere in Dallas in 1963, any possible Cold War ramifications, or Cuba. We hadn’t yet heard the name “Lee Harvey Oswald.”

I was just days away from my 14th birthday and not plugged in to the news of the day. But this was different to my classmates and me. We followed the story on radio and on our black-and-white TV sets – everything from the shooting of Officer J. D. Tippet to the arrest of Oswald and his subsequent death at the hands of Jack Ruby.

I remember the soberness of the funeral procession. And I still remember the words of Lyndon Johnson when he addressed the nation saying: “I ask for your help – and God’s.” 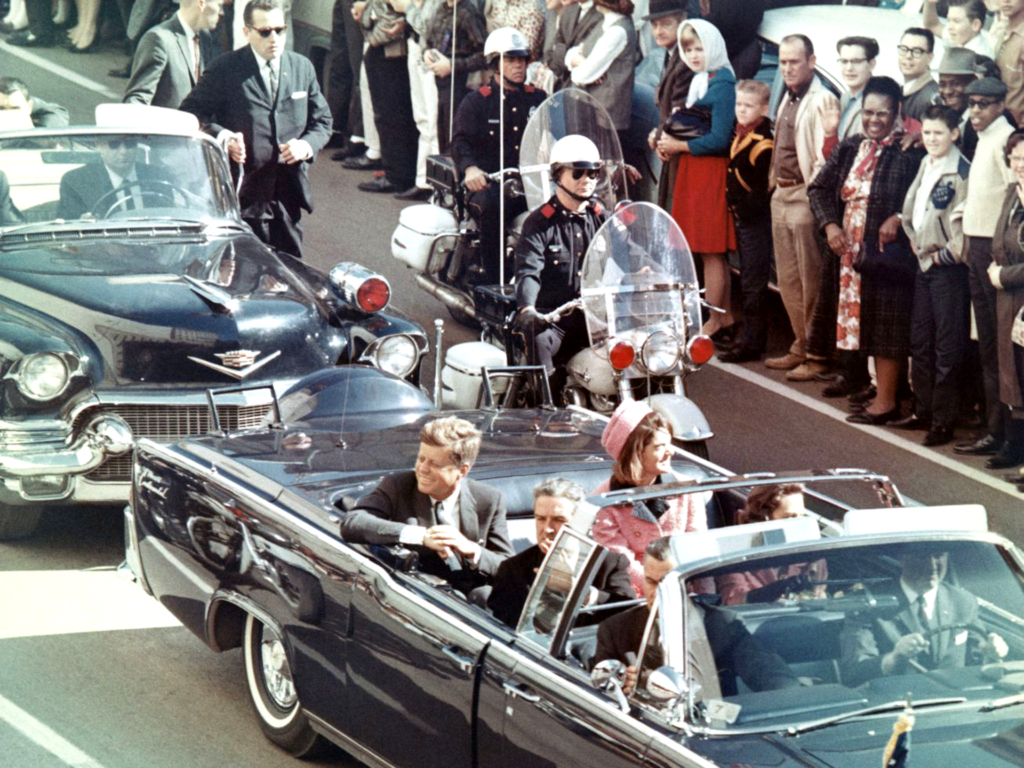 JFK, moments away from destiny. (Work in public domain; copyright expired in 1991 without renewal. First published on 24 November 1963.)

I had no idea how close I would become to certain events and certain people who were involved with that fateful day.

In 1972, I graduated from the University of Texas, asked my girlfriend to marry me, and accepted a job at WFAA 570 (now KLIF), at that time located at Communications Center at Young and Houston streets in Dallas – mere yards from Dealey Plaza, the famous Grassy Knoll, and the Texas School Book Depository.

It was October of 1972 and, at the age of 22, I had realized my biggest dream.  I was working in Dallas radio.

I started as the night news anchor, but soon was moved to days as a reporter. It was a short walk to the Records Building where the commissioners met – a walk that took me past the Kennedy Memorial and within view of the assassination site. I began to develop an interest in anything having to do with the event.

I left WFAA briefly, and when I returned, I was again on the evening shift that, by then, featured a late-night talk show hosted by Ed Busch.

These were the days of the Fairness Doctrine, and Ed’s show was not blatantly political. JFK assassination conspiracy theories were starting to gain ground in the popular press, and Ed had authors on from time to time – with lots of “new information” pertaining to Oswald and such things as the Magic Bullet Theory and how it was or wasn’t possible for Oswald to have acted alone.

I found it ironic that the United States, North and South Vietnam, and the Viet Cong had signed an agreement on January 27, 1973 to effectively end the war that had driven LBJ from office. It had been just days earlier, on January 22, that I received a telephone call from WFAA afternoon anchor Bill Blanchard. “We need you,” he said urgently, explaining that former President Johnson had passed away.

I left my apartment in East Dallas and rushed to the station, where I manned an edit station, calling dignitaries and interviewing them about the life of LBJ. One of the people I interviewed that day was Sarah T. Hughes – the federal judge who had become part of history by swearing in President Johnson aboard Air Force One on the afternoon of the assassination.

Close-up of the “Fawn” record label of my song “They Said It Was Only One Man” – 1975. (Scan by Lynn Woolley for WBDaily)

I saved reports from the Johnson Ranch by ABC newsmen David Garcia, a former WFAA-TV anchor, and Bill Gill because they were so well done.

I was to interview Judge Hughes in person some years later, on the occasion of her assuming senior status. I have no transcription or recollection of the content of that interview, but it likely covered the events leading to the famous photo on Air Force One.

As conspiracy theories swirled, the time came when Ed Busch suggested I write a song about the assassination.

I thought it was a great idea. I wrote the song and brought my college folk singing buddy, Robert Malsbary, to Dallas to record it. In those days, Belo maintained a two-track recording studio at Communications Center.

Bob and I did the song, had old-style acetates made, and I presented one to Ed Busch who played it on the air.

We decided to go big.

We assembled some sidemen and rented the Sumet-Bernet studios in North Dallas to record a more professional version. With (the late) Donnie McDuff playing lead guitar, we used the hour we could afford to buy to lay down tracks and then pressed 1,000 records.

The JFK conspiracy story had suddenly made me into a record promoter.

Here’s the song on You Tube:  volume is low, so crank it up!

We had gone for the conspiracy angle in the lyrics, naming the song, “They Said It Was Only One Man.” The first verse was sung from the point-of-view of the assassin as he watched the motorcade draw closer. The chorus asked, “Could it really have happened that way?”

The Dallas Morning News did a nice feature on the song, complete with a shot of me and my guitar!

And over on KRLD, Ed’s big competitor, Lou Staples, gave us one airplay. One night each week, Lou would play new records, and ask his audience to vote on them. I was out driving the night he played my song. I rushed home to call all my friends and ask them to call in and vote for the song. The vote was barely in favor, but Staples broke the record anyway.

Being in Dallas, and with New Orleans District Attorney Jim Garrison investigating, the JFK assassination was never off the radar. Hugh Aynesworth, who had reported for the News, and authors like Robert Sam Anson were constantly coming out with articles or books. Occasionally, I got the assignment to interview people who were exceptionally close to the events of November 22nd.

On November 19, 1975, I did a report from the convention of the National Soft Drink Association. I had hoped the keynote speaker, Ronald Reagan would make his presidential announcement, but he didn’t. After my report was filed, I scurried over to the Fairmont Hotel to cover John Connally’s speech to the Dallas Citizen’s Council.

As was the case with Reagan, Connally sounded presidential, but did not make any announcements. After the speech, I got an interview – and asked him about the continuing conspiracy theories.

This is from my story: “Connally told me he sees no new evidence in the JFK assassination that would dispute the Warren Commission’s report, and he said he’s really not interested in holding any public office.”

The Abraham Zapruder film in slo-mo.

I moved over to KRLD as the spike in conspiracy theories was on the wane.

Still, every November 22nd, we’d all do something on the anniversary. One year, I stood at the door of the old School Book Depository and read messages that people had left there. One of those messages read, “Will we ever know for sure?”

I haven’t lived in Dallas since 1980. Since then, I’ve seen the Zapruder film many times. I’ve watched Oliver Stone’s movie “JFK.”

Movie clip from “JFK” — Hollywood’s version of the assassination.

More recently, I’ve read Stephen King’s novel “11/22/63,” and I still wonder. After all these years, my best guess is that the “they” in my song – the Warren Commission – was right. It probably was one man. Even with all the gnashing of teeth about right wing hatred in the South, it turned out to be a lone left wing communist that was mad at President Kennedy about Cuba.

The second verse of my song went like this:

In a moment a great man had died.
And the world paused and it cried.
Now the years have gone by,
But the tears are not dry.
Is there something they’re trying to hide?

Thirty-eight more years have passed since the writing of the song. And no, I don’t think major conspiracies can hold up that long. I think Lee Harvey Oswald killed Kennedy.