Term “Cisgender” Pops Up in Associated Press story on Inclusion

I don’t know anybody that uses the word “cisgender.” 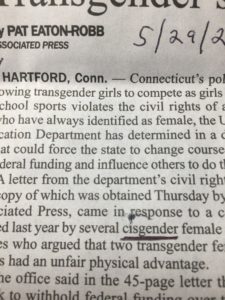 There it is! CISGENDER right in the paper. Photo by Lynn Woolley for WBDaily.

That may not mean anything. After all, I’m a rapidly aging (though still quite handsome) male with a girl’s first name, living in a small city in a conservative state. What would I know about words like “cisgender?”

I first came across the word some years ago in an online column written by a left-wing womyn. If you already know what a womyn is, you already know the lingo. But I didn’t know, and I had to look it up.

A person is cisgender if that person was born a certain gender and “identifies” as that gender.   I’ll give you two examples of genders: male and female, although there are apparently many more.

Note that most old farts and fartresses living in red states still identify as whatever they happened to be born as.

Well, I was born a woman.
I didn’t have no say.
And when my man finally comes home,
He makes me glad it happened that way.

Now that I think about it she could have improved her grammar. But back in 1966, country records were not given to the King’s English. Nor was her declaration controversial. She was born a woman, and that’s that. Nothing to be done about it. Oh the times, they are a’changing.

In today’s world, we have lot of genders and lots of confusion.

An Associated Press sports reporter by the name of Pat Eaton-Robb casually tossed in the word cisgender in a story about Connecticut’s transgender policy for high school students. 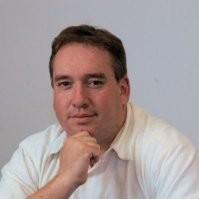 Pat Eaton-Robb from Linked In. No copyright notice provided.

This made me wonder who Pat Eaton-Robb is, and whether she is a raging liberal. Note that I’m always complaining about raging liberals writing for the Associated Press, which I often term the L-A-P and you know what the L stands for. Hint: it’s not a train in Chicago.

So I looked up Pat on the web and she is a he. (Turned out that way with my name as well!) In fact, Patrick Eaton-Robb is a “dad and husband” according to his AP bio. So that mystery is solved, and we’ll just have to wonder about the hyphenated last name.

(I got in trouble on Facebook recently for opining that a hyphenated last name typically signifies a liberal woman. Except that I said “double” last name instead of “hyphenated.” Lots of woman use a double last name like Hillary Rodham Clinton. My mother, LaVerne Strange often used the name LaVerne Strange Woolley to retain her link to her parents. Nothing wrong with that. But hyphenated names could cause a problem in the future when a woman named Jones-Thompson marries another woman named Ludlow-Alvarez and her married name becomes Trixie Jones-Thompson-Ludlow-Alvarez. I’m just sayin’.)

Where did it all start? You could look it up, but never mind. I already did. Wikipedia makes it so easy.

Cisgender has its origin in the Latin-derived prefix cis-, meaning “on this side of”, which is the opposite of trans-, meaning “across from” or “on the other side of”.

“Cis,” it appears, is on the other side of “trans.” Well, who’d have thought? Why do we need such a word? Here’s my opinion – and you are entitled to it.

I think cisgender is a word used by the LGBTQ community as a way to equalize word references. If a “trans” person is to be normalized (and God knows we can’t use the word “normal” to refer to what was normal for 10,000 years), then a, er, normal person must have a descriptive term as well. Cisgender is that term. I found this on the internet as well:

“Cisgender” was coined in academic journal articles in the 1990s. It started to gain broader popularity from around 2007 when transgender theorist Julia Serano discussed it in her book Whipping Girl. Over the next decade, activists, scholars and online forums helped to, literally, spread the word.

My thanks to Miss, er Ms. Serano for giving the C-word a push, but shouldn’t zir pronoun be “zir?” Are we gonna go full-tilt gender-neutral or not?

And, no, cisgender doesn’t mean “straight.” I found this at healthline.com:

Now I’m really confused. People can be both cisgender and straight? At the same time? Right now, I’m not totally sure what I am. I was born a biological male and have always identified that way. My package indicates that’s what I am, girl’s name or not. I never even thought about all this until the multi-gender movement came along. Now we have up to 58 genders. Sure we do.

The article that precipitated this column, written by the aforementioned dad and father, and utilizing the term cisgender, was about a policy in Connecticut that allows boys to compete in girls’ sports if the boys identify as girls.

The actual girls are not happy about this, but the leftists that run the schools are all about inclusion. The U.S. Education Department (now run by a bunch of right-wingers who don’t know zir place) sided with the actual girls. Apparently, the actual (cisgender? Hell. Who knows?) girls were tired of being outperformed by girls that were actually boys. So the government will withhold some taxpayer cash until Connecticut gets its genders straightened out.

You have to ask yourself – why are our schools being run by nutcases?

We’re talking about high schools. How long will it be before they all have “Departments of Diversity and Inclusion” such as ALL major colleges now have? This kind of gender (and racial) lunacy is what those departments specialize in.

Of course, the ACLU sides with the boys that want to be girls. This is from Pat’s –may I call you Pat? I feel like we’re old friends now – article:

“All that today’s finding represents is yet another attack from the Trump administration on transgender students,” said Chase Strangio, who leads transgender justice initiatives for the American Civil Liberties Union’s LGBT and HIV Project. Trans students belong in our schools, including on sports teams, and we aren’t backing down from this fight,” Strangio said.

Meanwhile, two of the trans “girls,” Terry Miller and Andraya Yearwood, have won a combined 15 girls’ state indoor or outdoor championship races since 2017. According to their hack lawyers at the ACLU, all is on equal footing because the “girls” are taking hormones. Oh well, why didn’t you say so?

Pat tells us that the Trump administration got involved because several cisgender female athletes felt the trans-girls have an unfair physical advantage. Bless their hearts. Girls who identify as girls are the obvious villains in this sordid story.

They are cisgender. And all this time, they probably thought they were normal.