Songs of the Left

I should have been a liberal.

Maybe that’s a little strong. Let me say it this way: it’s amazing that I’m NOT a liberal. A lot of my early influences could have led me down that path. I grew up in a poor family. (Thank God that my folks never considered government handouts. They didn’t make big salaries, but they worked!) I grew up in the Methodist Church, which is somewhat to the left of the Baptists. Most of my life has been spent in the media.

By now, you’re thinking — it really IS amazing that’s he’s not a liberal. But wait! It gets even better. After my sophomore year in junior college, I went off to the University of Texas at Austin, where liberalism is practiced with a capital L. And you know what I did to help pay the apartment rent?

If you’re off the floor and back in your chair, please let me explain. I found a guy from my hometown who needed a roommate at UT, and we decided to share an apartment. When we moved in and unpacked, we both had guitars. We decided to work up an act.

We started learning the kind of music that two guys and two acoustical guitars can do. We grabbed every album we could find by such artists as The Beatles; Simon & Garfunkel; Peter, Paul & Mary; The Kingston Trio; John Denver; and The Everly Brothers. Folk music was THE thing. 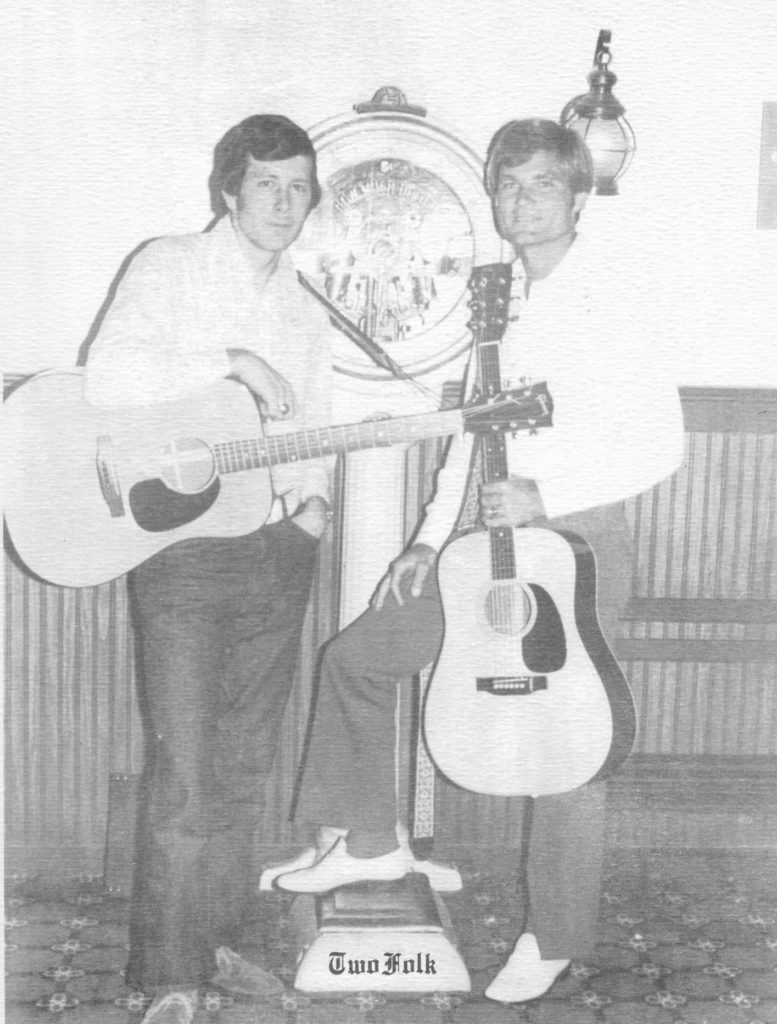 This is a TwoFolk brochure circa 1972 possibly taken at the Railhead in Dallas. That’s me on the left and Robert Malsbary on the right. I was playing a Gibson J-50 and Bob had a Martin D-35.

There were two of us, and so we became TwoFolk.

Soon we were a big attraction at a campus nightclub called “The Other Place.” Every Tuesday and Friday night, our crowd would show up to cheer and sing along. And drink a few brews. The Vietnam War was raging, and sometimes, we’d be reminded of that by the protests going on outside the window. Yep, the student body had political leanings and so did the music.

We performed it, sometimes without even knowing what we were singing about. One thing we did know was that liberals had all the best songs. Think about it: even today, can you name a popular song [other than country] that has conservative lyrics? But left-leaning songs have become standards. A few that come to mind include:

The Times, They Are A Changing
by Bob Dylan

Come Senators and Congressmen throughout the land
And don’t criticize what you don’t understand.
Your sons and your daughters are beyond your command.
The old guard is rapidly changing.

The Great Mandella
by Peter Yarrow

So I told him that he’d better shut his mouth
And do his job like a man.
And he answered, listen, father, I will never kill another.
He thinks he’s better than his brother who died.
What the hell does he think he’s doing
To his father who brought him right?

So goodbye to my Juan, goodbye Rosalita.
Adios mis amigos, Jesus y Maria.
You won’t have a name when you ride the big airplane.
And all they will call you will be: deportee.

There But For Fortune
by Phil Ochs

In four songs, you get the picture. A burgeoning youth movement threatening the old ways; protesting the killing in Vietnam; lamenting the plight of migrant farm workers; and pity for the junkies and the down-and-out. The lyrics were strong and the music was haunting.

But hey! Conservatives can write music too.

I’d give you a list, but other than the obvious gospel/religious songs, it’d be a short list. In fact, I’ve not yet thought of a song that addresses the plight of the unborn child about to be destroyed in an abortion.

There’s no folk song about a just war that was fought for the cause of freedom. No song about working and getting off welfare. (Well, there IS a song called “Get A Job” but that was kind of a novelty, and it didn’t have one of those haunting melodies.)

Well, logic to the rescue. A few years ago, I decided to attempt to write a conservative folk song. I wanted to keep it simple — about a tiny little subject: instilling values in a child. See what you think:

Plow the fields.
Time for planting.
Prime the engine; grease the wheels.
Plant the seed of future promise
In the fertile fields.

A child is born.
Time for planting.
Fill the mind with fine ideals.
Plant the seed of future promise
In the fertile fields.

Autumn comes.
Time for reaping.
Bring the crops and check the yields.
As you sow, so shall you harvest
From the fertile fields.

The song has a cool little guitar part, too.

I’ve yet to perform it in public, but maybe some day I will. If I ever do, I hope the audience realizes that it’s not really about fields of wheat and barley, but about bringing a child up with the right values so that when that child reaches adulthood, the “harvest” will be a person of character.

At least it’s one conservative folk song — even if I did have to write it myself.