Ruth Bader Ginsburg is dead and American cities may burn

The strangest presidential election in American history has just taken another sharp turn.

In this season we’ve seen a Russian Collusion Hoax, rogue FBI agents with an “insurance policy” to keep Donald Trump from being elected, impeachment, investigations of a phone call, a global pandemic, a Marxist movement against American values and violence in urban areas.

Ruth Bader Ginsburg is dead at 87, and you’ll forgive me if I leave it to others to examine her legacy and sing her praises. To me she was nothing more than one of the liberal justices that supported such left-wing causes as open borders and abortion on demand. 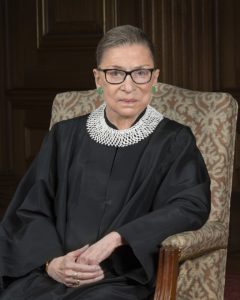 With mere days left until we vote, and with some votes already being mailed in, we now have a new issue: Roe v. Wade. Abortion is on the ballot now, and that opens up a lot of questions.

What will Republicans do?

Trump, being Trump, will want to move quickly to make a nomination. And he should. Obama, in his final year as POTUS, nominated Merrick Garland and Republicans controlling the Senate stopped it. That was their right.

One can only imagine that if Bill/Hillary Clinton or Obama or Joe Biden were in Trump’s shoes right now, they would not hesitate. The party that has the White House and the Senate is equipped to name and approve a new justice.

But that’s not the way Lisa Murkowski, the RINO senator from Alaska feels. She’s already said she will not vote until after the election. Maine Senator Susan Collins is better than Murkowski but not by much. She’s in a tight race and who knows what she will do? Without these two senators, it will be tight. But Trump should nominate and put the onus on all GOP senators to support the cause of conservatism.

When Trump nominated Kavanaugh to replace Anthony “Swing Vote” Kennedy, Democrats came unhinged – even more than usual. They made stuff up. They told us that all women – like Christine Blasey Ford – should be believed. (They recanted that later when Biden was accused of sexual misconduct.) Biden’s veep-mate, Kamala Harris, said some particularly incendiary things.

Democrats, in effect, lost their minds over this nomination – even more so that they had over the Neil Gorsuch nomination. The fact is that Democrats, mostly due to the issue of killing unborn children, do not want any conservative nominee ever, and will intimate to the point of violence to stop any such nomination.

Trump probably ought to nominate a woman. A VERY conservative woman.

There’s already talk about Amy Coney Barrett. This is from ScotusBlog.com:

In November 2017, President Donald Trump released a revised list of potential Supreme Court nominees. The November 2017 list was an expanded version of two earlier lists, announced during the 2016 presidential campaign, from which then-candidate Trump pledged, if elected, to pick a successor to the late Justice Antonin Scalia, who died on February 13, 2016. First on the new list – because it was in alphabetical order – was Amy Coney Barrett, a Notre Dame law professor (and former Scalia clerk) who had recently been confirmed to a seat on the U.S. Court of Appeals for the 7th Circuit. Barrett’s confirmation hearings had received considerable attention after Democrats on the Senate Judiciary Committee – most notably, Senator Dianne Feinstein of California – grilled her on the role of her Catholic faith in judging. Feinstein’s criticism did not stop Barrett from being confirmed, and since then there has been speculation that it may have in fact strengthened her case to fill the seat that will be vacated by the retirement of Justice Anthony Kennedy.

As we now know, she didn’t get that nomination, but this might be her time.

She is considered to be an originalist – someone who believes the Constitution should be interpreted as it was originally intended. On abortion, she has stated that Roe v. Wade’s central theme – the “right” to abortion might always stand, but the matter of funding is still an issue. (Of course, if Barrett openly said she’s against Roe v. Wade, the Left would have conniption fits.)

On the other hand, a Barrett confirmation would put her on the Court alongside conservatives Gorsuch, Kavanaugh, Thomas and Alito – as well as the sometimes-conservative Chief Justice Roberts (who cannot be depended upon by originalists). 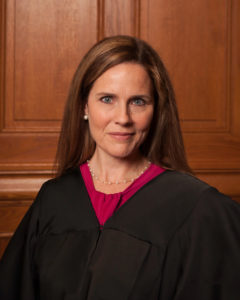 With Roberts on board, conservatives would have six votes and if Roe v. Wade is ever to be struck down, this would be the time.

Note that Roe v. Wade is an unconstitutional ruling as there is no such “right to privacy in the Constitution, and no mention of any right to abortion. The Framers would have been appalled at the thought.

Other issues matter too, such as the current social justice revolts, immigration and borders, the Green New Deal, and transgender rights. As the lady said in the movie – fasten your seatbelts; it’s going to be a bumpy ride.

The Left is violent, and any nomination will undoubtedly cause riots.

Maybe it started with George Floyd’s death in Minneapolis, or maybe the seed was planted in the Kavanaugh hearings. But the American Left is organized and ready to destroy our cities to get what it wants. This is politics through intimidation, but it has worked well enough that they are still doing it, and far too few of them pay any price.

Left-wing mayors in cities like New York, Chicago, Los Angeles, Seattle, Minneapolis, Portland, Dallas, Houston, and Austin had better warn the mobs that they will ask President Trump to send in troops to quell violence. Otherwise, they may not have any cities left to govern.

While Democrats get violent, Republicans should prepare to vote.

This opening in the Supreme Court should motivate people who care about this country to make certain to vote. If Biden wins and were to nominate Hillary Clinton, or Barack Obama or maybe one of his race-based attorneys general (Eric Holder or Loretta Lynch), they’d be just one seat away from being able to fundamentally change the country. They already have to a great extent.

We now have words like “cisgender,” and “Latinx.” As we talked about on Planet Logic earlier today, the Fort Worth ISD under left-wing ideologue superintendent Kent Scribner, allows football players to run onto the field carrying Mexican flags. The Left is changing our culture. A strong conservative majority on the Supreme Court could slow that down.

Now is not the time to reflect on Merrick Garland or to listen to Senate Minority Leader Chuck Schumer who is a mouthy hypocrite. Instead, Trump should do what Schumer would do if he had the power. Nominate a strong conservative to the bench and put pressure on Mitch McConnell and other Republicans to serve their country by getting the nominee through.

Democrat-run cities will burn. Those that ask for help from Trump to quell violence should get it. The rest of them can pound sand.