If you think the national media despises Donald Trump, you should see how Texas media treats Lt. Gov. Dan Patrick.  Patrick, an unapologetic conservative, has made two appearances on FOX News’ “Tucker Carlson Tonight” espousing a view that most liberals condemn. 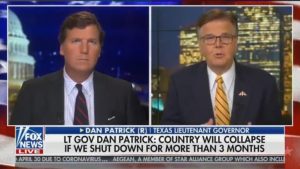 That view is that we must be willing to accept a certain amount of risk and reopen the nation.  This is common sense.   The Left disagrees and seems unconcerned about multi-trillion-dollar rescue bills – so long as they can work in some climate change nonsense, and promote diversity.

The left also seems unconcerned that the long lockdown is destroying businesses, jobs and lives.

It drives me nuts that in the midst of a pandemic, the Left and the Right have split right down the middle – and made everything about it political.  Note that the Left yells “racism” when someone refers to COVID-19 as the “Wuhan Flu,” or mentions that it originated in China.    Joe Biden called President Trump “xenophobic” for his travel restrictions on China – something he later claimed to support.  And now, we’re all split on how and when to reopen the country.

I’ve been wondering how many businesses in my town, Temple, Texas, will never come back.  The morning paper listed Gold’s Gym as one of them this morning – joining a growing list.  In Austin, my favorite restaurant, Threadgill’s, is now shuttered forever.  Dallas-based Neiman-Marcus has declared bankruptcy.  If we don’t start to reopen soon, we’ll see riots in the streets because people can’t pay the rent and put food on the table.  That’s where Dan Patrick is coming from, but the Left seems to see the lockdown as a way to put Joe Biden into the White House.

Austin is a city hard-hit by all this because of the massive amount of building going on there.   Downtown skyscrapers, under construction, were halted in their tracks by the liberal city government —until the companies raised hell.  Something has to give – and soon.

Nevertheless, the Austin American-Statesman carried a blog by Jonathan Tilove – bitterly attacking Patrick for his comments on the Tucker show.  The headline was outrageous:

Taking this line out of context totally changes the meaning.  You have to read the transcript and/or see the video to get the essence, both of which (to his credit) Tilove did provide.

However, the opening salvo, in a very smarmy way (which is kind of in style right now on both sides of the aisle) sets the tone for how Tilove feels about Dan Patrick:

“It takes a big man to admit that he was right all along.

But last night [4/20/20], in a potent, jam-packed five minutes with Tucker Carlson on Fox, Lt. Gov. Dan Patrick made a clean breast of it, admitting his foresight and courage.

I’m sorry that I’m vindicated, Patrick confessed before the whole world, the Fox TV audience, and maybe even that most special Fox viewer, President Donald Trump. I’m sorry to say I was right on this.

You can watch it here, and then I have provided a transcript of an appearance that was so replete with memorable lines that it was pleasure to savor, word by word.”

But hold on!  Since Patrick WAS right, why should he be held accountable for admitting that he was right?  Politicians do that to get reelected – note that you rarely hear them say they were wrong about anything – and so do talk show hosts.  And bloggers.

Stop right here and talk a look at the video because you need to see it in context.  So click it up and see how Dan Patrick gets on:

I saw the interview as it ran on TV.  I cheered.  It’s interviews such as this that make Tucker Carlson must-see TV.  But I have to admit that the fact that this opinion is even controversial frosts me.  If we wait until the last coronavirus patient is either recovered or buried before we open up the country, we’re not going to have any jobs.  Yes, folks, people will die.

We are now in the age of Never-Patrickers.

The Texas Left, hoping to turn the state blue, has never liked Patrick.  He came to political prominence after having been a TV sports anchor and a conservative talk show host.  “Dan Patrick” isn’t even his real name, and that drives the Left nuts.  They often call him by his real name in order to goad him.

After reading this, I posted on Facebook:  “This article may be the single worst piece of journalism I’ve ever seen in a major newspaper.”  I have since learned that it was a blog.  That the newspaper allows free speech is a good thing—but this is still a terrible post.

It’s worth pointing out – as I did on Facebook – that the United States sent young men to die in two world wars, Vietnam, and other wars because the cause seemed more important than individual lives.  Healthcare workers in far-safer locations have gone to New York to help treat COVID-19 patients.  Yes, Mr, Tilove, there is risk is doing some things that have to be done.

So I sent Mr. Tilove an email:

“I’m writing a column about your column.  I’m not a name-caller, but I do intend to call you out for shoddy journalism.   If you’d like to appear on my podcast, I can do it by phone.  Let me know.  If not, maybe you could answer some questions via email:

He responded, and was gracious enough.  But as far as appearing on the Planet Logic podcast, he was terse.

There does seem to be an emergence of Never-Patrickers in Texas, and the Tucker Carlson interviews are just egging them on.  They can lift quotes that make Patrick look bad on this issue, and they can mock him.   The problem they have is that he is 100 percent correct.

Lynn Woolley is a writer at www.WBDaily.com and podcaster at www.PlanetLogic.us. His email address is lwoolley9189@gmail.com.