Red McCombs Should Demand His Money Back

It has been said that Texas is the best expression of the American idea—and Red McCombs is one of the best expressions of everything it means to be a Texan. He came from a tiny town in the southern panhandle, started as an Edsel salesman in Corpus Christi and went onto become one of the richest men in the world. McCombs has been enormously generous in so many ways throughout his life—a gift to the Lone Star State that keeps on giving.

An advertising genius who, literally, invented product placement, McCombs’ business successes have contributed to Texas’ growth and economic prosperity in a dozen different ways. In my hometown of San Antonio, he is known for bringing NBA basketball to our city with the Spurs. The key for him in his first professional sports venture was understanding the importance of television in moving San Antonio onto a national stage. 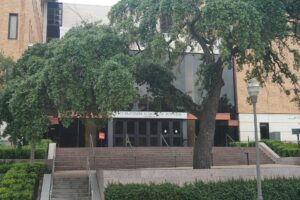 The College of Business Administration building on the campus of the University of Texas at Austin in Austin on August 3, 2019. (Photo by Michael Barera via Wikipedia Creative Commons)

When the movie “The Alamo” was being filmed in 1960 at Bracketville, McCombs sought out John Wayne and got him to agree to open the film in San Antonio, pulling the klieg lights and red carpet out of Hollywood and into downtown San Antonio again, putting Texas on the map.

McCombs also brought Formula 1 racing to the United States after he learned that over 1 billion people watched those races. The possibilities of a billion viewers around the globe all looking at Texas motivated him to make sure the “Circuit of the Americas” was located here.

McCombs has donated hundreds of millions of dollars to all kinds of charities in Texas including the M.D. Anderson Cancer Center in Houston. In 2000, he contributed $50 million dollars to establish the Red McCombs School of Business at the University of Texas, a gift which leveraged an additional $100 million to ensure that the state that has repeatedly been identified over the past two decades as the best state for business anywhere in America has a first-class business school.

Knowing what McCombs has done for the state and for the University of Texas, you can imagine how outrageous it was to see that when the template for the fall schedule at the McCombs School was released this week it included a warning for students that some business topics may be “traumatic.” Professors must promise to give their students a heads up if some really scary business topic is about to be discussed.

Are they kidding? Anyone who knows Red McCombs knows he is not afraid of anything.

There are also directions requiring every professor to “identify their pronouns (she/he/they/zhe).

They seem to be serious. There is an entire section on “personal pronoun preference.”

Farther down in the syllabus template, professors are directed to let their students know that they “acknowledge that we are meeting on the Idigenous [sic] lands of Turtle Island, the ancestral name for what is now North America.” They must also affirm: “I would like to acknowledge that Alabama-Coushatta, Caddo, Carrizo/Comecrudo, Coahuiltecan, Comanche, Kickapoo, Lipan Apache, Tonkawa, Ysleta Del Sur Pueblo and all the American and Indigenous Peoples who have been or have become a part of these lands and territories of Texas.”

The Comanche arrived in Texas after the Spanish, so why aren’t those great minds over at the prestigious “40 Acres” acknowledging that they are on the lands of Carlos III de Bourbon, His Most Catholic Majesty and King of Spain? And the “Turtle Island” reference is nonsense. It’s a creation story from native tribes in the Northeast, not Texas.

The point is, why aren’t professors at the McCombs School of Business required to inform their students that if it weren’t for Red McCombs, they wouldn’t have a building, desks or, indeed, a business school?

Furthermore, McCombs School of Business students should know that McCombs is one of those Texas giants who understood from the beginning that Texas—now the best reflection of the American idea—is not an accident. It has been and continues to be a hard-fought battle to maintain a state where freedom and liberty are harnessed to ensure businesses are free to innovate to create jobs and prosperity for all. McCombs never walked away from that fight.

Texas universities are on very shaky grounds these days.

Enrollment is plummeting because students are no longer willing to pay outrageous tuition to have a steady diet of “pronoun protocols” and “land acknowledgements” shoved down their throats. They have also had it with the constant drum beat of so-called “Diversity, Equity and Inclusion” (DEI), which actually means exclusion, injustice and essentially a stacked deck for anyone who does not genuflect to the woke ideology that is destroying our colleges.

Other states are fighting back.

Florida passed a “Stop Woke” Individual Freedom law designed to eliminate these kinds of ridiculous and divisive antics on campus and to affirm the principles of actual equality, merit and hard work. It requires that students be reminded that in America, we work together to overcome challenges and hardships—we don’t band together to blame others for them.

The University of Texas needs to wake up before somebody shows this syllabus to Red McCombs—and he demands his money back. 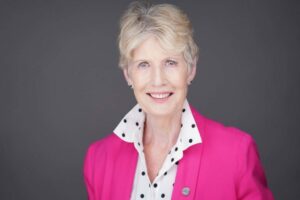 Sherry Sylvester is a Distinguished Senior Fellow at the Texas Public Policy Foundation, and the former Senior Advisor to Texas Lt. Governor Dan Patrick.  This column is used by permission..