In a “Random Samplings” column, any subject is fair game.

The Democratic nomination is down to Biden, Warren, and Harris.

As candidates like Jay Inslee start to drop out, and others such as Bill de Blasio and Beto O’Rourke are fading, it seems to me that just three of them have a chance. Biden does because of his experience, political machine, and status as a former senator and vice-president.

Elizabeth Warren is the new darling of the Progressive Movement, and is a wealthy female. Kamala Harris is a “woman of color” and has a powerful machine behind her. I think Biden will be tossed aside as too old and with too much baggage. If the primary focuses on socialist policies, give the advantage to Warren. If the primary turns totally to issues of race and reparations, Harris will win.   I think the eventual nominee will be Warren. If she becomes the Dem’s standard bearer, Trump will have a lot of material to work with.

[UPDATE 4/9/20:  I was wrong about Warren.  She self-destructed.  As of now, Biden has the delegates, but there is talk about drafting New York Gov. Andrew Cuomo.  That could happen if Biden’s mind deteriorates further.] 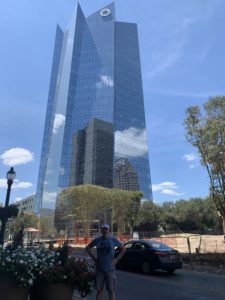 So, on a recent trip to the Alamo City, I was gratified to see that San Antonio finally has a modern ‘scraper.

The new Frost Bank Tower is only 24 stories tall, but, it has a cool design and it stands out in a very dated skyline.

Congrats to SA! This tower is long overdue!

The U.S. Deficit will top a Trillion Dollars next year.

The rate at which this country is pending money that we don’t have is staggering. While the other major crisis – illegal immigration – is the more immediate threat, the deficit and the national debt are even more dangerous. The numbers are hard to visualize. Most calculators don’t have enough windows to enter them. It’s all made worse by a new budget deal that President Trump has signed onto with Congress. It will return us to annual deficits of more than a trillion.

With a debt of more than $22 trillion, federal spending should be the top issue in the presidential race, but it’s never mentioned. Instead, we focus on things we can’t control (climate change), things that rip us apart culturally (race, ethnicity, gender identity), and stupid conspiracy theories (Russia, collusion, Steele Dossier). Imagine your family in as deep a debt as the country, and what you would be focused on.

Three questions to ask your congressman.

My congressman is John Carter, who is up for reelection in the 31st District and who first assumed office in 2003. His top accomplishment in office, according to Wikipedia, is a law that makes it easier to prove identity theft. Other than that, he claims to subscribe to “Texas values.” Here are three questions I would ask him at a town hall meeting – and you should ask your congressman as well:

Your congressman will not appreciate these questions. He would rather talk about “values” and how much money he has brought to his district. If you want him to like you, do not ask him these questions. If you love your country, ask him.

What is the top two-sided hit 45 RPM single of all time?

You might be able to make me an offer for my old record albums. But stay away from my collection of 45’s. Those, I love dearly. 45’s are what radio stations used to play on the air before tape cartridges replaced them, and now, digital files. As a kid, I used to think that a recording artist that had come up with a great song would put any old thing on the flip side. That was often true. Then, the Beatles came along. John Lennon and Paul McCartney rarely wrote bad songs (with the notable exception of “You Know My Name (Look Up the Number)”.) So most of the Beatle 45’s were two-sided hits. There were a few before the Beatles as well. Here are 4 great ones listed in order:

I miss 45 RPM records. These are four of the best ever.