ISSUE ONE: Robinson on Chauvin.

Eugene Robinson has always impressed me as being somewhat thoughtful, but extremely left-leaning. He writes for the Washington Post and is a fixture on MSNBC.

His column about daring to hope for a conviction of Derek Chauvin was both thoughtful and negligent.

On the one hand, Robinson, a black man, described in detail the final ordeal of George Floyd in terms that could bring tears to your eyes. On the other hand, nary a mention of Floyd’s criminal past. In 2007, Floyd posed as a water department worker, entered a woman’s apartment and held a gun to her stomach. On the day he died, he was high on several drugs and sick from heart disease. Robinson ignored all that.

If Chauvin acted badly, Floyd acted far worse. Take away the racial narrative, and Chauvin should have been convicted of manslaughter. 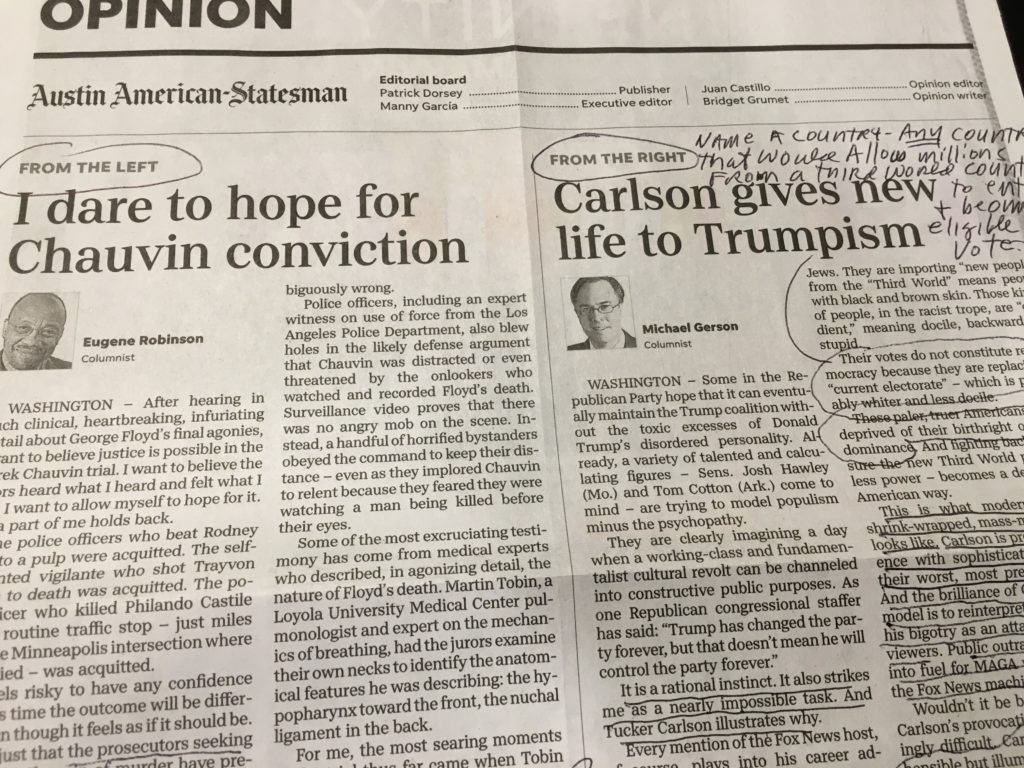 Robinson & Gerson side-by-side in the Austin American-Statesman on April 16, 2021. Gerson is erroneously labeled “FROM THE RIGHT.” Photo by Lynn Woolley (marked up for use on air) for WBDaily.

Michael Gerson, featured as a “from the right” columnist in some newspapers is no conservative. He uses his column specifically to attack conservatives, which makes you wonder about his days as a speechwriter for George W. Bush.

Gerson particularly has it in for FOX News’ Tucker Carlson which makes him eligible to guest host for Brian Stelter on “Reliable Sources.”

Carlson of late has advanced and embraced “replacement theory” which holds that the Democrats are trying to bring in millions of new voters to replace current Americans. To Gerson, this is “white supremacy” of the highest order. He calls Tucker a “professional troll.”

Eschewing facts, Gerson sides with the hate-group the Anti-Defamation League, which has called for Tucker Carlson to be fired. Frankly, Gerson comes across as a professional troll.

Name a country – any country – that would allow millions of people from third-world countries to enter and become eligible to vote. When you state it so plainly and so obviously, it’s a no-brainer.

No country would erase its borders knowing that people with different cultures and different values would come in and wreak massive change. Well, no country but us.

As of this writing, President Joe Biden has released 42,000 migrants into the U.S. interior, mostly in Texas. Migrant children continue to flood in. Biden and the Democrats have no intention of ever sending them back. Obviously, the left thinks these illegal aliens are future Democrat votes.

Replacement Theory may be a white supremacist trope to some, but Joe Biden is executing the strategy to perfection. Conservatives are racists if we object, and extinct if we don’t.