Random Samplings #48: The Perils and the Privileges of Panhandling

Random Samplings 47: The Case for Impeachment of Joe Biden is far Greater than for Trump

Beam me up, Scotty!  I’m with Illogical! 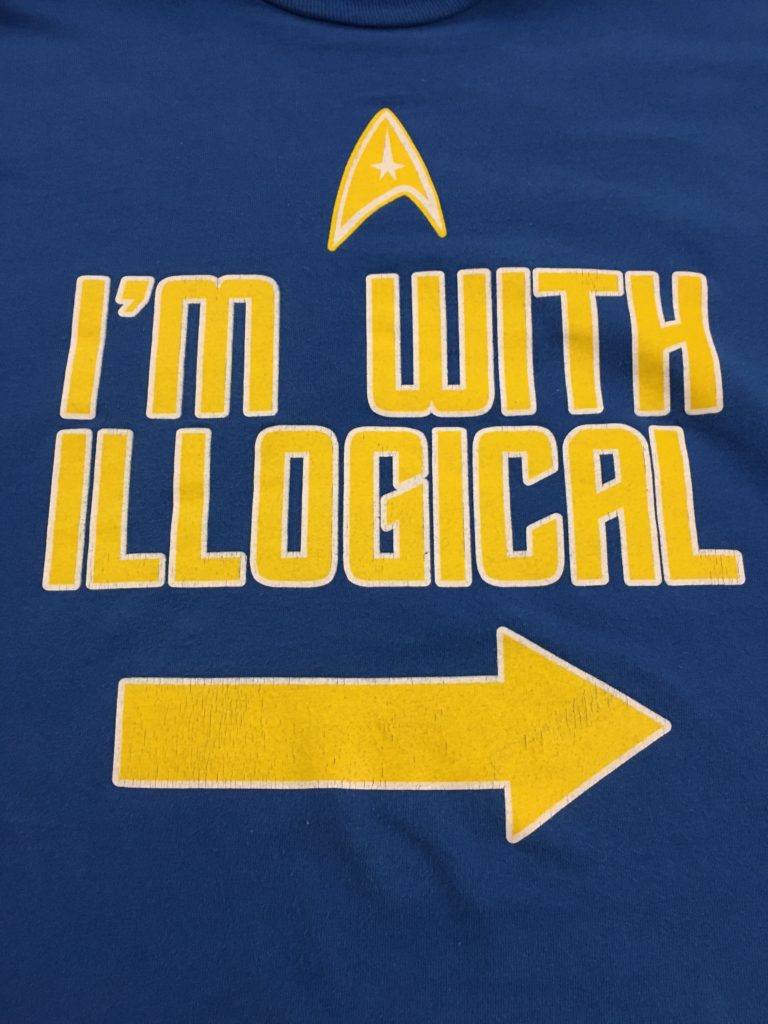 This is the “T” I wore to work today. (Photo by Lynn Woolley for WBDaily)

ISSUE ONE: Stop the presses.

The Epoch Times has been attacked again, probably by thugs from the Chinese Communist Party. Four black-clad masked men were caught on security cameras breaking into the Time’s Hong Kong printing plant and using hammers to smash the presses and a computer.

Why would the CCP want to shut down The Epoch Times?

Because it’s one of the few remaining independent news sources in Hong Kong which, as you know, has been the scene of violent police crackdowns. Protesters there demand freedom and the autonomy to live their lives and pursue happiness.

The CCP wants Hong Kong to be more like the mainland and totally under the thumb of a repressive, anti-human rights policy that forbids media criticism of the government. The Epoch Times will rebuild and undoubtedly they will come under attack again.

In Communist China, the government shuts down the media. In the United States, CNN wants to do the same thing. Call it the CNN-Tucker Carlson War!

Tucker seems to take it with a grain of salt, but CNN is serious. They want the entire network gone, but in particular they despise Carlson because he says things that should only be stated in hushed tones after midnight. For example, he says Biden’s open borders have a political goal and that is to bring new voters into the country that will keep Democrats in power.

Does anyone seriously doubt that? No; not even CNN and it’s anti-free speech ally the Anti-Defamation League. The idea is to prevent Tucker from saying it out loud. And so they charge Tucker with being a white supremacist.

The ADL says Tucker has got to go. How is this different from the Communist Chinese Party?

If you watch nothing but CNN and read nothing except dispatches from the Associated Press, you’d think Trump failed and Joe Biden walks on water. You’d think the Biden agenda is the greatest thing since Obamacare.

When you watch CNN and read the AP, be skeptical. Be very skeptical. I’m not sure America can survive with a media that accepts no responsibility to tell the truth.