Random Samplings 18: The Great Communicators of our Time

Random Samplings of a Logical Mind!

Where communicating is king!

ISSUE ONE: Trump as the Great Communicator. 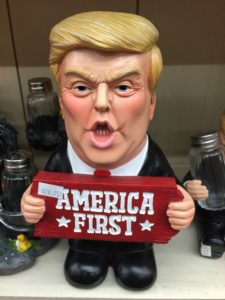 Even a Trump doll can communicate. (Photo taken in December 2019 by Lynn Woolley at Trump Tower, New York.)

Does anybody rush to the TV when Joe Biden speaks? Not likely. But Trump is a master orator. Pull up his speech at C-PAC or any of the Trump rallies and you’ll witness mesmerizing words powered by the sheer force of personality.

President Reagan was like that too. Listen to his masterful speech called “A Time For Choosing” that propelled him into the national spotlight.

On the other side of the aisle, John F. Kennedy was amazing in front of a camera, and Bill Clinton wasn’t bad either.

On today’s stage, Donald Trump has the title “Great Communicator” all to himself.

ISSUE TWO: Pilots of the Airwaves.

Radio and television are two very different things, and (believe it or not) radio is far superior when it comes to one-on one communication.

The best in the business was Paul Harvey who had a voice that could stop you in your tracks. Harvey’s “If I Were the Devil” monologue was so perfect that anyone who ever heard it remembers it. “If I were the Devil,” he said, “I would teach to pray after me, ‘Our Father which art in Washington.’”

Rush Limbaugh likewise had the voice, the skills and the message. Speaking of conservatives, he said: “When we look into a crowd, we see Americans…we don’t see groups. What we see is potential.”

Is there a broadcaster today that can stand in their shoes?   Bill O’Reilly was good on TV, but terrible on radio. Tucker Carlson is amazing in his own way and possibly today’s most important voice.

In my short few years on Earth, I’ve heard some great voices that never served in office or pontificated on the air.

Whether you were a believer or not, you could watch a Billy Graham sermon and be enthralled.

The same goes for Jimmy Dean whether he was telling you about a giant mineworker named “Big Bad John” or how great it was to eat his brand of breakfast sausage.

The greatest voice in advertising belonged to Hal Riney who intoned, on behalf of Ronald Reagan, “It’s morning in America.”

It’s been said that the mark of a great speech – and perhaps, a great commercial – is how it makes you feel. Graham was the perfect spokesman for God, Dean’s Texas accent and delivery made him the best ever at recitations, and no one has ever matched Riney for creating a mood with his voice.