Can you imagine how weird it would seem if some routine job you did turned into a cult thirty years after the fact?

That’s what happened with a small TV commercial that I wrote and produced with Marsha Haney years ago.

Marsha and I both knew the ad seemed to have staying power, and we’d joked about negotiating for residuals, but beyond that, it was just a day in the life at a small Temple advertising agency called Chandler/Woolley.

The TV commercial in question has become known as the “Oh, you do know Betty Blackwell” commercial.

Sometimes, it’s even reached fame in initialese as “OYDKBB.” When I first heard about this, I was as mystified as you probably are now.

Marsha had run across something about it on the internet, and she made me aware. So I did some research, and I found lots of references on the internet and on You Tube where the ad has seemingly reached immortality.

But back in the day, it was just another day at the office.

Someone had made a reference to a young Austin attorney named Betty Blackwell, or someone had mentioned her to me. I can’t remember which. In any case, she hired us to make a television spot for her. As I recall, the budget was a whopping $500. 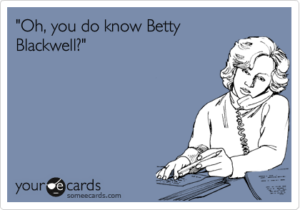 A meme we found on the internet

We were, as one newspaper article states, a small advertising shop, but most of our TV production budgets were far higher than $500.

I could have turned the job down, but I thought it would be fun to go to Austin and shoot it, and then have it run on TV for what I figured would be a six-month campaign. That campaign, somehow, turned into about 30 years.

I knew that we had no money to use a production house, or to hire talent. So I wrote the commercial with that in mind, with the idea that Marsha (our agency’s Production Manager) would be the on-camera talent.

At the time, she and I were paired up as local TV hosts of the Children’s Miracle Network on KCEN-TV in the Waco-Temple market, and I was quite aware of her abilities.

The script had to be simple and to the point.

Remember, the budget was close to non-existent for shooting a TV spot. We engaged the studios of KXAN-TV where the spot was scheduled to run, and where we could make it at virtually no cost.

I wrote a little story about a woman on the phone to a friend, and worried sick about her son “Brian” who was in trouble with the law.

In the commercial, we don’t hear the other person’s voice. It’s a given though, that both parties have heard good things about Betty Blackwell, and our TV mom is gratified to hear that her friend can make a reference to Betty on behalf of her son.

Video:  The sequel.  Sounds like Marsha’s voice, but we didn’t do this one.

Thus the line that seems to have captured the attention Austin’s late-night viewers for three decades:

“Oh, you do know Betty Blackwell?”

The word “do” is emphasized, and it’s apparent when you watch the spot that our TV mom is quite relieved because Brian is going to get some help at last.

This is most typical of thirty-second pitches on late-night TV: Create a mood, set up a problem, and solve the problem. That’s what we did, and apparently, we did it pretty well.

When we pulled into the KXAN-TV parking lot, Marsha retrieved a laundry basket from the back seat. It contained everything we’d need.

She’d brought a princess-style telephone, a table she could assemble, a lamp, and (best of all) a photo of “Brian” which was her actual son Pierce who was not in any kind of trouble in real life! Marsha called it her “set in a basket.”

We arranged everything in the studio, and worked the lights to make the mood dark, ominous, and tense – just like Brian’s situation. I directed the spot and had the camera follow Marsha’s “nervous” hands as she teetered on the edge of panic over her TV son’s plight.

The lighting was just right, and the camera moves worked perfectly. But Marsha’s delivery made it all work. I can’t remember how many takes we did, but we got it just right.

Then, we went to Betty’s law office, and rearranged some law books to use as a background for her stand-up at the end. Suddenly the darkness was gone and the bright law office signified a better life – if you hire Betty as your attorney when these problems come up.

We took home a reel of the spot to use as a demo if we wanted to, and we sent Betty a bill. That was it. The job was over, we got paid, and we moved on to the next project. Decades later, Marsha made me aware of what had happened with that old commercial.

This article, presented here for historical purposes, ran in the Austin American-Statesman:

Doritos, Pepsi and Chrysler have nothing on Austin criminal lawyer Betty Blackwell.

Granted, their big-money Super Bowl commercials reach millions of people and attract big-name celebrities like Clint Eastwood and Elton John. But how long do they run? A month? Six months? A year?

Betty Blackwell’s ad — a 30-second bit oozing with drama, desperation and, ultimately, hope — has been running on local television for more than 20 years. The vintage commercial and its odd tagline (Oh, you do know Betty Blackwell?) is a late-night TV staple that has made the criminal attorney a household name.

“People sometimes say, ‘I know that name, but I’m not sure why,’” Blackwell said. “I don’t usually tell them unless they ask.”

Every big city comes with no-budget, no-frills TV commercials. Most fade away before we even notice them. But there are some that make such an impact that they become a part of our collective consciousness, a running joke that only a local would get. Who could forget Earl the Yodeling Camel peddling cars for Chapman Motor Sales? How about “ABC Pest and Lawnnnnnnnnnnnnnnn?” And God knows we’ll never be able to forget 777-7777, even if we don’t need Paul Dunham and his legion of lawyers to bail us out of jail.

Blackwell kicked off her iconic commercial around 1990. The ad opens with a tight shot of woman’s carefully manicured hand, her peach-colored nails nervously tapping glasses the size of a pie plate as she talks on a push-button phone with a white spiral cord. The woman, who appears to be wearing a puffy pirate shirt, tells a friend she’s dealing with “Brian’s problem” and that he’s been released from jail.

“We’ve been looking for a good criminal lawyer who might be able to help.” she says.

A short pause follows, and then, nearly crumbling in relief, the woman says, “Oh you do know Betty Blackwell?”

The ad quickly wraps up with a word from the real Blackwell and a phone number. But it’s that awkward line — OYDKBB? — that got the most attention. And it still does.

An Austin pub trivia team is named after the line, as are several pieces of art (including a neon-pink deer head) by local artists. There’s even a Facebook page devoted to the phrase.

“That’s the tagline that this little ad company in Temple wrote,” Blackwell said. “I would have never have thought people would catch on to that. It’s so bizarre how that happens.”

As one Facebook commenter posted, “What the hell did the person on the other end of the phone say to elicit that exact response, anyway?”

From a Yelper: “If she already knew about her, why is she asking?”

The commercial, which was shot in Blackwell’s old office in Central Austin and runs between midnight and 2 a.m. on weekends, was reshot several years ago to give the actress more modern clothing and smaller glasses. Both the old and new versions air on television.

After all these years, the commercial inspires mixed emotions for Blackwell. The lawyer has spent years building a career that has included serving as president of the Criminal Justice Section of the State Bar of Texas, president of the Texas Criminal Defense Lawyers Association and co-author of a criminal law manual. So to be known in some circles for her commercials is a little weird, she said.

On the other hand, it’s nice to have her name out there. And for now, people seem happy to enjoy the ad in all its kitschy, campy, horrible glory.

“It will be a sad day I think when they stop running that one,” a fan wrote on Yelp. “It’s historic Austin!”

Excuse me? Did he write, “kitschy, campy, horrible glory?”

I’ll take up for that little commercial any day of the week. In today’s advertising world, it’s doubtful that a big agency like GSD&M would take on a TV production job for less than $20,000 – and they’d only do that for a close friend or client.

Some of the TV ads you see today have huge budgets and are mini-movies complete with CG effects.

We had a small local TV studio, one camera, and a set in a basket.

Even better, we had a great on-air talent, and a story to tell in twenty-nine seconds.

We made the best of that half-minute that we could, and apparently in the process, we became part of Austin advertising lore.

Video:  We made the all-star team in this series of “throwback” commercials in Austin.

Best of all, our little campy spot with its “horrible glory” was effective enough to run for years and build its own fandom. At our shop, we always measured success of a spot by the results it got for the client.

I think Betty Blackwell would agree that she got her money’s worth.

And now you know the rest of the story.

We must admit.  Maybe one or two of the stories in this book might be a tad campy.  Watch for it on Amazon.