Obelisks and Other Monuments

EDITOR’S NOTE (8/3/20): This column was written following my second trip to Washington DC. On my first visit, I was set to testify before an FCC hearing on a new radio station that is now known as KLTD-FM. It was on this second trip – a business meeting – that I had a chance to see the great monuments for the first time and was inspired to write about them. I returned to Washington several times since to do radio broadcasts, and again on June 21, 2020 with the Lady of Logic. We saw the monuments, and visited the “ghetto” at Lafayette Square created by Black Lives Matter in the shadow of the White House.

(The photos in this posting were taken on 6/21/20 by Julie Sullivan for WBDaily.) 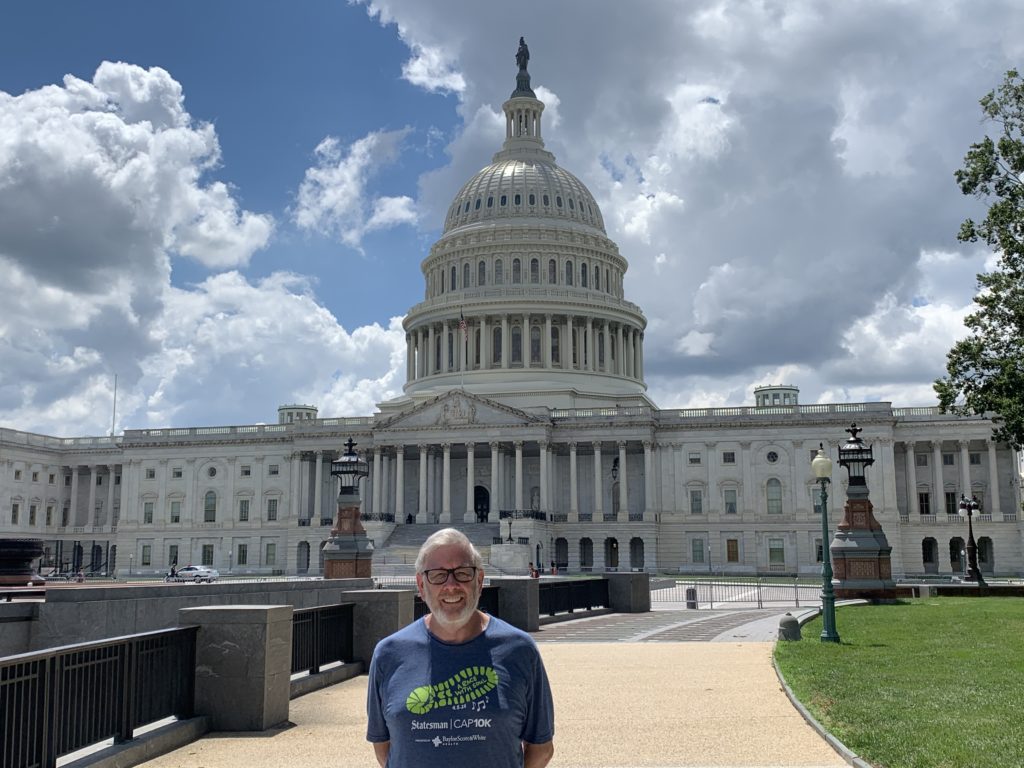 Lynn Woolley at the National Capitol 6/21/20

On May 10, 2000, I had the chance to do what millions of Americans and other visitors to our nation’s capital have done: tour the great monuments of Washington, D.C. I was thrilled at the chance to actually see these great tableaus that I had seen in pictures all my life. 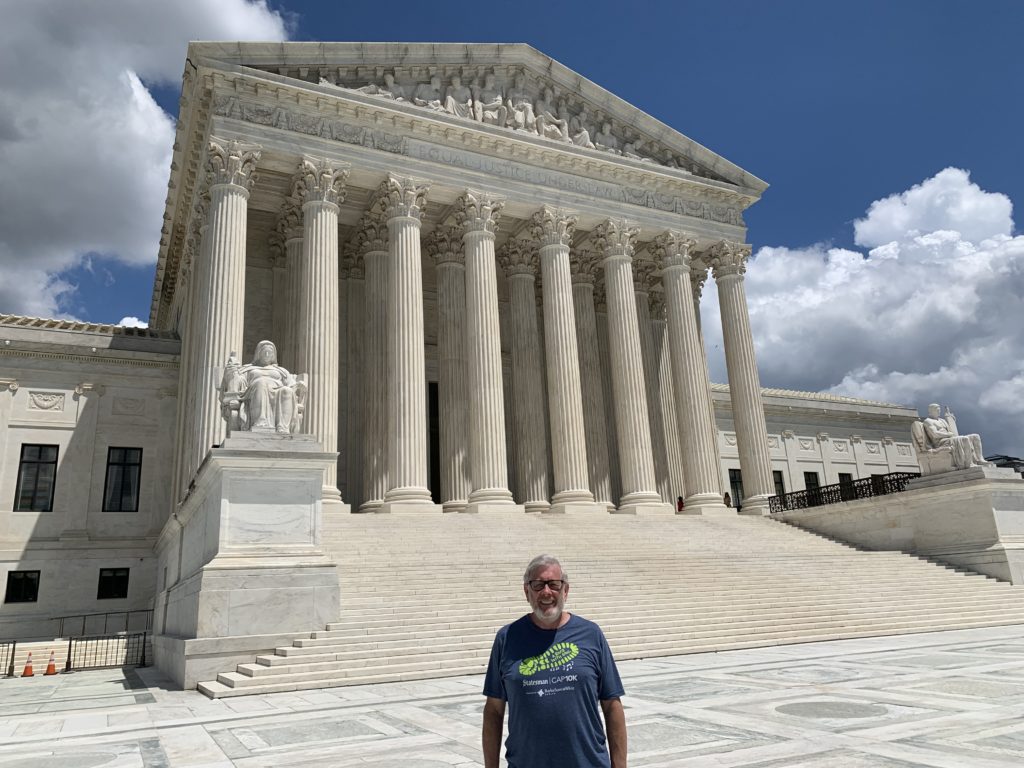 When our conference ended for the day, we purchased tickets on a bus tour of the Mall area, with stops scheduled at the major points of interest. We drove around the Capitol, the Supreme Court Building, the Department of Labor, the Pentagon and various statues and lesser monuments. Our first major stop was the Jefferson Memorial.

The Memorial itself is a white marble building on the South side of the Tidal Basin (yep, the place where Wilbur Mills and Fanne Foxe took a swim) near the great Potomac River. If you’ve only seen it in pictures, you’ll be surprised at how big it is.

The building is circular with a portico supported by twelve columns. Inside is a nineteen-foot-tall statute of our third President, designed by Rudolph Evans, standing in contrast to the white marble walls of the interior of the monument. A glance over Jefferson’s left shoulder reveal excerpts from the Declaration of Independence carved into the wall beginning with

“We hold these truths to be self-evident…”

As I stood in awe contemplating these words, a group of school kids began to recite them out loud. I looked about the memorial to find three other inscriptions from Jefferson’s writings, and was struck to notice how many times this Founding Father mentioned God. So when I returned home, I looked up some quotes from Mr. Jefferson. He seemed to invoke the Creator quite a bit, actually, with quotes such as:

“Resistance to tyrants is obedience to God.”

Of course, there’s that pesky line in the Declaration that goes…

“…endowed by their Creator…”

After seeing this memorial, I am more convinced that ever that our Founders build our nation around a belief in freedom that is derived from a just God. The Jefferson Memorial was begun in 1938 under Franklin Roosevelt who spoke at the ceremony marking the start of construction. It was dedicated on April 3, 1943, the 200th anniversary of Jefferson’s birth. 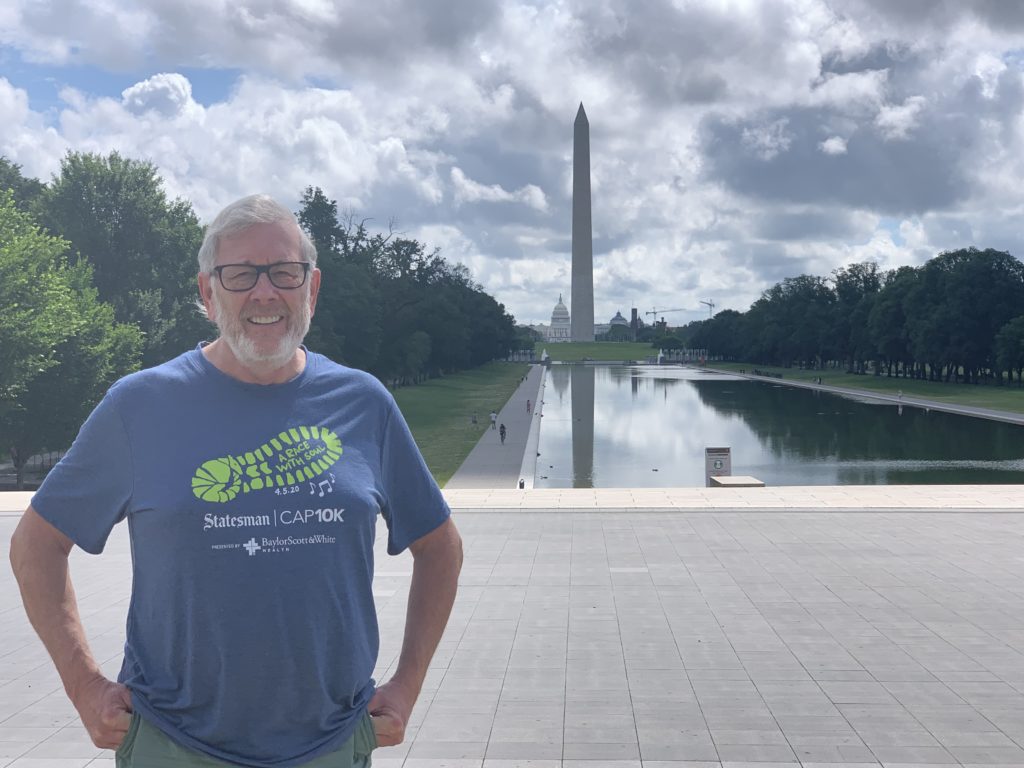 Our bus next took us to the area where several memorials are within walking distance. As I headed for the Vietnam Wall, I had firm expectations regarding what I would see. But the Wall wasn’t like that. On this dark night, I almost came upon the Wall before I knew it. It loomed to the left as I walked along a concrete sidewalk, rising gradually from the ground and finally attaining a height that was slightly higher than I could reach, and then sloping downward at the end.

The 500 foot-long Wall was designed by Maya Ying Lin and was unveiled in 1982 amidst much controversy. Some critics called it “a black gash of shame,” and others said it failed to portray the heroism of those who died. Today, most Americans seem to have forgotten the controversy.

On this ebony Wall are inscribed the names of some 58,000 men and women to gave their lives in Vietnam. At night, you can barely read them by the soft light emanating from tiny bulbs that rise from the sidewalk. With so many names, finding any particular one is a difficult task, and so the names are provided in alphabetical order in notebooks so that families can be directed to the correct spot on the wall.

Many roses protruded from the Wall that night, left by loved ones of those who died. Near the wall, I paused to glance at the Vietnam Nurses Memorial, a statue honoring those women who ministered to the wounded and dying in Vietnam. 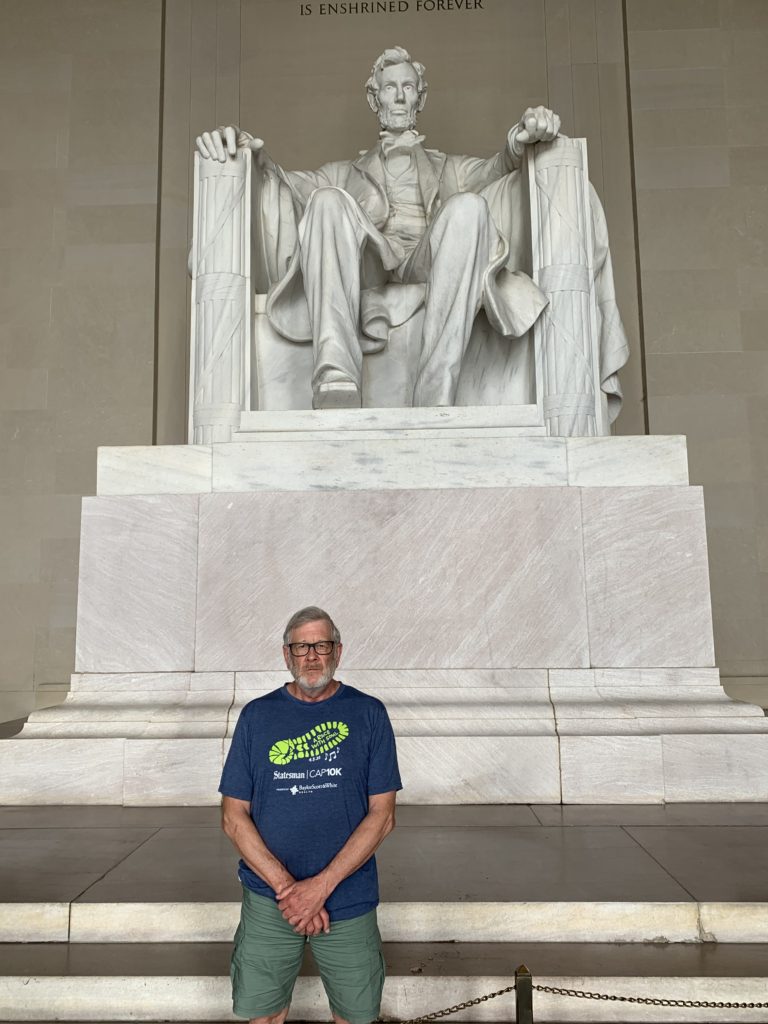 It was just a short walk across the street to the Lincoln Memorial. Already, from the bus, I had caught a glimpse of Mr. Lincoln sitting in his chair. I was anxious to see the memorial and its awesome statue up close.

The building is made of marble and stands eighty feet tall. It has a great hall that is surrounded by thirty-six Doric columns — one for each of the states in the Union at the time Lincoln was assassinated.

Inside the center section sits Mr. Lincoln on his chair. The statue, designed by Daniel Chester French, is nineteen feet high. It is an amazing likeness of the 16th President, and so impressive that most people simply stared in awe. On one of the die walls is inscribed the words of the Gettysburg Address. I mentioned to my friends that the Address, with all its inspiring words, contained but one error: it stated that world would not remember the speech. If Mr. Lincoln had only known.

“In this temple as in the hearts of the people for whom he saved the union the memory of Abraham Lincoln is enshrined forever.”

We next visited this statue in Arlington, Va., just across the Potomac that most people refer to as the Iwo Jima Memorial. Designed by Felix W. DeWeldon, it freezes in time a dramatic moment from a Pulitzer Prize winning photo by the AP’s Joe Rosenthal — the raising of the American Flag on Mt. Suribachi, Iwo Jima.

It was dedicated on November 10, 1954, and is the largest bronze sculpture ever made. More than 6000 men, including 5800 from the Third, Fourth and Fifth U.S. Marine divisions were killed to capture Iwo Jima, which was a great help to the Americans in the later stages of the war with Japan. But the monument has continued to change with new inscriptions being added from time to time to honor other battlefields where Marines shed their blood.

By the way, if you remember the Johnny Cash song, “The Ballad of Ira Hayes,” you might be interested to know that Mr. Hayes was one of the men hoisting the flag in the famous photo and sculpture. 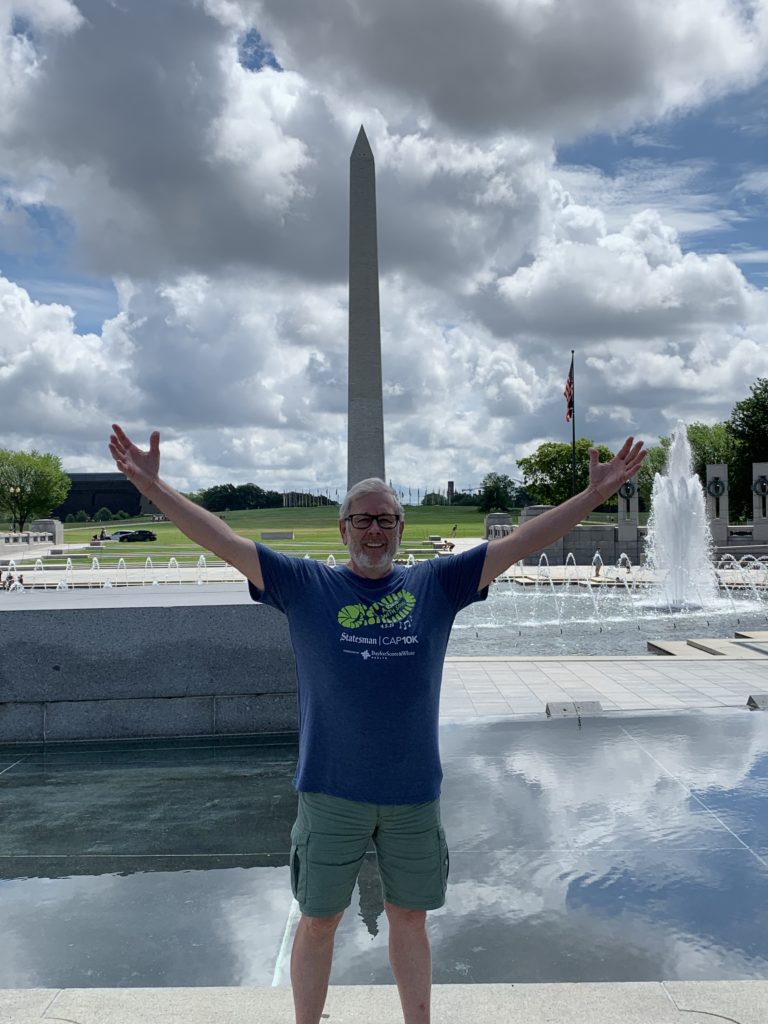 We hadn’t stopped at the Washington Monument, so the next night, we took the time to walk over to see it, strolling by the White House on our way over. Due to restoration efforts, we couldn’t go inside, but we did have a great view of what was once the tallest building in the world at 555 feet, 5 and 1/8 inches. I was amazed to learn how old it is.

The giant obelisk’s cornerstone was laid on July 4, 1848 with the same trowel that Washington had used to lay the cornerstone at the Capitol in 1793. The ground proved to be too soft, so they moved the location to the north. Construction proved to be controversial and expensive, and work was stopped. In 1876, Congress voted to complete the project, which was finally finished on December 6, 1884. The total cost was $1.1 million.

Near the foot of the marble column is a small building with various exhibits about “the Father of our Country” and his career, summed up by the words of one of his officers, Henry “Light Horse Harry” Lee: “First in war, first in peace, and first in the hearts of his countrymen.” By the way, some people made an attempt to construct a monument to Washington while he was still alive, but he objected due to cost. Apparently, he wasn’t too worried about his legacy. 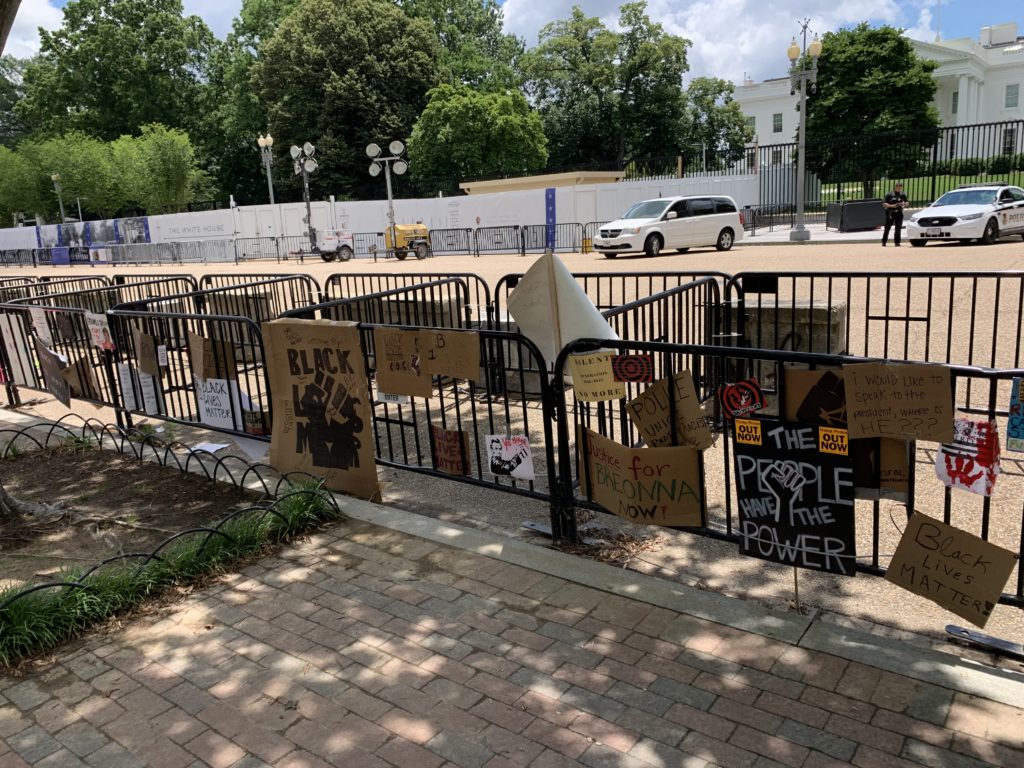 Washington, D.C. is a magnificent city with so much to see and so much history to remember and celebrate. These are obelisks and monuments that all Americans should visit and ponder. 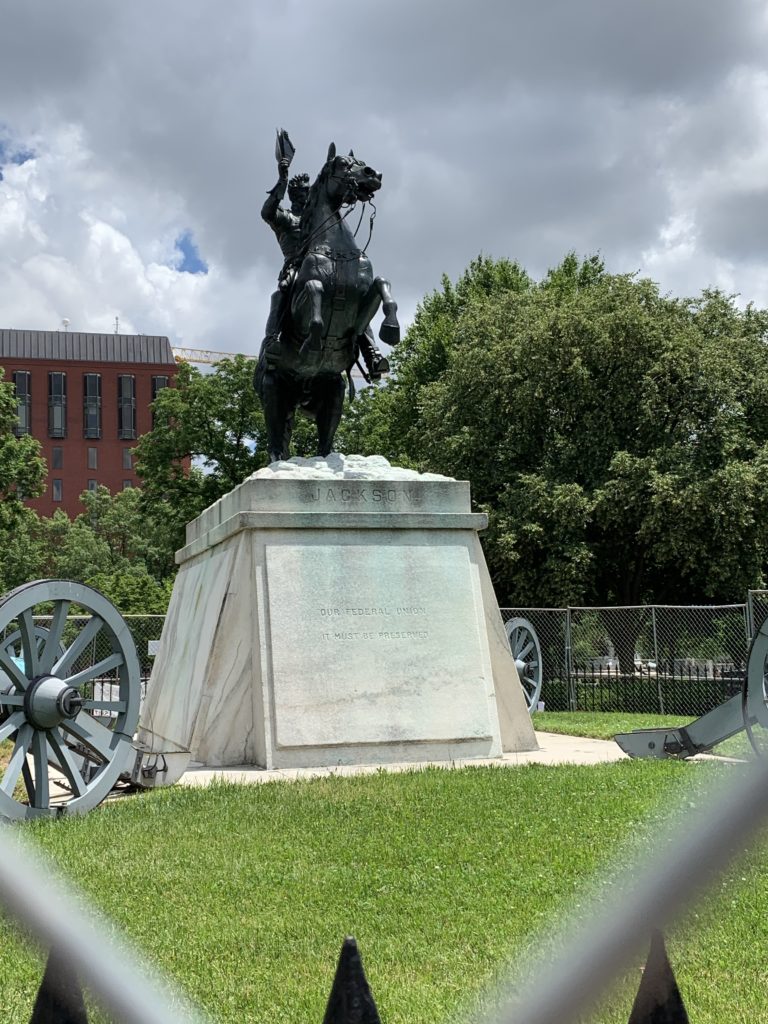 The Andrew Jackson statue at Lafayette Square on 6/21/20, the day before BLM anarchists tried to tear it down.