Just when you thought our southern border’s illegal immigration invasion couldn’t get worse, Texas Attorney General Ken Paxton has revealed a particularly disturbing program under which many “immigrants” and their families are gaining access to the U.S. – and per ushe, it’s at taxpayer expense.

In a recent War Room Pandemic interview with Steve Bannon, Paxton detailed his bringing 12 state attorneys general along with former acting U.S. Attorney General Matt Whitaker to Texas’ southern border to see in person the real toll of the southern invasion. Per Paxton, media reports can’t reflect the devastation and daily influx of people flowing across the border as well as the growing control cartels are exercising over drugs and human trafficking.

During the border visit, Paxton and seven of the state attorneys general announced a new lawsuit aimed at the Biden administration for “its abuse of the Central American Minors (CAM) Refugee and Parole Program.” 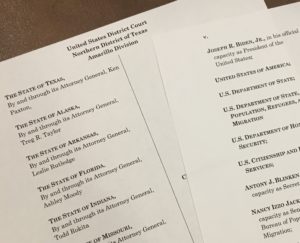 “The Biden Administration has sown nothing but disaster for our country through its illegal, unconstitutional immigration policies,” Paxton said in a news release. “Biden’s latest round of flagrant law-breaking includes his Central American Minors Program, which has contributed significantly to many states being forced to take in even more aliens. My fellow attorneys general and I are suing to stop it.”

He further detailed the Central American Minors Program to Bannon explaining how the Biden administration is allowing asylum-seekers from Honduras, El Salvador and Guatemala to have their children, even other caregivers, immediately flown into the country at taxpayer expense. Per Paxton, this action is “completely illegal, nothing has been put into place by Congress and yet the Biden administration is doing this.”

Paxton said the administration is not following court orders or federal law. With a recent court ruling reinstating the Remain in Mexico program, Paxton discussed how the asylum-seekers should be immediately deported to Mexico, but are not. Bannon described it as “economic asylum which doesn’t exist.”

Biden appears to have restarted the Central American Minors Program on March 10, 2021, after the program was terminated in 2017. A statement released at the program’s restart announced:

The State Department’s Bureau of Population, Refugees, and Migration (PRM) is working closely with DHS’s U.S. Citizenship and Immigration Services (USCIS) to reopen the program in two phases:  the first will process eligible applications that were closed when the program was terminated in 2017, and the second will begin to accept new applications with updated guidance to follow.

The idea of this program, re-started from the Obama administration, being outside the law would hardly be unusual.

Paxton described Biden as a “rogue president who doesn’t honor anything related to the Constitution or federal law” and who is destroying the country as evidenced by drug overdoses being up more than 30% this year while deaths among border patrol agents are up 275% due to spread of COVID-19.

When asked if Biden’s conduct rises to an impeachable offense, Paxton answered that “it’s not even a close question.” He further explained how legal actions having successfully highlighted the administration’s violation of laws yet when the lawsuits are won, those rulings are also ignored. He also discussed Biden’s disregard for limited government as well as our checks and balances.

“If they (Congress) don’t impeach him, we may as well acknowledge we have a monarchy, or a dictator or oligarchy. We don’t have a constitutional form of government anymore,” he concluded.

Many Texans and other Americans seem to agree that Biden is seriously harming our country. This onslaught of national injury is unprecedented, especially with its origination being from our own government. But leave it to the Biden administration. Why inflict just injury when insult (as with the Central American Minors Program) is also an option?