Never Trump Conservatives Should be Careful of What They Wish

There is danger ahead if hardheaded conservatives decide that they can’t vote for President Trump’s re-election under any circumstances. The circumstances we are facing – should a Democrat win in 2020 – are dire. There are five major reasons to vote for President Trump against any of the current slate of Democrats, or anyone else that might be a late entry such as Hillary Clinton or Michelle Obama. [Or Andrew Cuomo.] 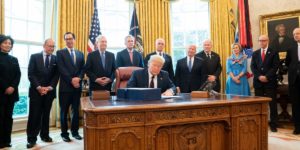 It’s presumed that such bipartisan issues as national defense and foreign relations would proceed as usual under the leadership of either party – but even there, President Trump has shown exceptional vision by moving the U.S. Embassy in Israel from Tel Aviv to Jerusalem and by fighting back at the Chinese against their trade and monetary practices and theft of our intellectual property. Note that prior presidents bloviated about these things, but did nothing.

On five major issues, however, it would be a tragedy if Trump loses.

When Republicans get mad, they get over it. When Democrats get mad, they get even. With regard to the Supreme Court, they thought they had it made when various polls and experts predicted an easy win for Hillary Clinton in 2016. By now, she would have had two nominees and both would have been from the far left.

But Trump pulled off a surprise win and appointed Neil Gorsuch and then Brett Kavanaugh, whom the Democrats slandered mercilessly without serious evidence.   President Trump may even get a third nomination depending on the health of Justice Ruth Bader Ginsburg. If that happens, the Democrats will declare a civil war unless Trump names a Merrick Garland type, which is not likely.

Then, there are the political threats made by the Left against the Court. There is a current dispute over the Court’s decision to hear a challenge to New York City’s restrictions on how gun owners with residential permits can transport their guns. Democrats in the Senate, including Sheldon Whitehouse, Mazie Hirono, Richard Blumenthal, and Kirsten Gillibrand filed an opposition legal brief – but they went beyond that. They threatened to “restructure” the Supreme Court if they don’t get a ruling they like in this case, and presumably others as well. This is called packing the Court. It’s been tried before and it failed, but today’s Democrats are in no mood to learn from history.

Imagine if Trump gets that third appointment and names another conservative to the Court – and then loses in 2020. The Democrats, faced with a 6 to 3 conservative majority (counting Chief Justice Roberts), they may well try to pack the court. That is dangerous not only to conservative ideals, but to our political system as well.

If Democrats win, they promise to spend trillions on climate change.

This goes far beyond whether you believe in climate change, or even whether humans cause it. The real question is whether spending trillions of dollars would have any affect at all on the climate and how devastating that would be to the economy.

My own platform, if I were in the electable class, would be to acknowledge that we are in a hot spell, and to suggest that we look for reasonable ways to preserve the environment and keep our air and water clean. That’s more of a “conservationist” ideology than an “environmentalist” one, but I think it is the way to proceed. I’m seeing new homes built with solar panels – and that’s great. As time marches on, scientists and engineers will find ways to make so-called renewable energy more usable and desirable to consumers. A slow, steady, natural progression is best – one that can easily be transferred to third-world countries including China and India where most of the carbon comes from.

What the Democrats are proposing – especially the $16 trillion dollars plan of socialist Bernie Sanders – would destroy our economy. Donald Trump knows this. But every Democrat is promising to bankrupt the country in the name of fixing the unfixable.

If we elect Democrats, they may very well abolish the Electoral College.

You may have noticed this, but dang near everything Democrats do empowers Democrats. They love early voting and motor voter because it gives them time to line up buses filled with Democrats and take them to the polls. They love on-line voting because they know that more Democrats would vote that way than Republicans. They embrace voter fraud because it always works in their favor.

So it is with the Electoral College. Right now, the Electoral College works against the Democrats, and so, many have called for its elimination. The Framers put it into the Constitution to keep large urban areas that they foresaw from having the power to elect all presidents. They felt that if the states elected presidents that they would put much thought into the process and the result would be a highly qualified president.

Fast forward to today, and the Never Trumpers think it got us a brash, unqualified president. But without it, we could elect someone far dumber and far less qualified like Bernie Sanders or Beto O’Rourke. O’Rourke would give us the first F-Word Presidency.

What the Electoral College does for us in modern times is that it stops the state of California from electing our presidents. Because of its gigantic population fueled by legal and illegal immigration, California has become a left-wing wasteland. It is why Hillary Clinton won the popular vote in 2016. Without the Electoral College, Hillary Clinton would be our chief executive right now.

The Electoral College ensures that states like Wisconsin, Montana, New Mexico, and so-on – states without large cities like Los Angeles, Chicago, and New York – can have a say. Without it, as the population is now distributed, there would never be another Republican president. If elected, watch for Democrats to try to abolish it.

Democrats would move to abolish our borders.

But they want political power, and naturalizing as many poor immigrants as they can provides them with a permanent underclass that needs their help, and therefore also provides votes.

In a sane country, we’d have immigration reform that makes sense.

We’d have workable guest worker programs so that impoverished Mexicans could come here to work. But we’d actually document them and we’d check their criminal and health records before we let them in. We’d require a modicum of English for people who plan to be here a while because language is the glue that hold us together. We’d go back to the original intent of the 14th Amendment and drop the insane idea of birthright citizenship. We’d make legal immigration less complicated and we’d bring in immigrants that would make America stronger. We’d bring in immigrants that would fly our flag and not that of the country they desire to leave.

If Democrats get elected, the worst will happen – as it already is. More people such as Kate Steinle will die by murder and more like Amber Rice will die by being run over by intoxicated illegals. But Democrats will get more votes and that’s what’s important to them.

Democrats will take their abortion extremism to outrageous levels.

Democrats for some time have been beholden to the radical feminist movement and to Planned Parenthood. There is no longer any such thing as a pro-life Democrat. Most of them used to be pro-life, but that changed with the movement. Now, abortion is a let-wing sacrament that is the major litmus test for all candidates.

One reason we need immigrants is that so many of our own people are aborted. It has become a veritable holocaust, and yet Virginia Governor Ralph Northam seems comfortable with the idea of killing born children – after the baby is born and the mother has had a talk with the doctor. This is chilling. Yet, it is the new Democrat way.

Chief among abortion apologists is the nation’s number one provider of the grisly service – Planned Parenthood. Nothing stops Democrats from supporting Planned Parenthood – not even videotapes of the organization selling off parts of baby humans. Democrats, if elected, will continue to dehumanize babies in the womb. They believe that’s what gets them votes.

There is so much more to beware of from Democrats.

They have embraced the gender nonsense that is plaguing the nation, they want to take away your Second Amendment Rights and “buy back” your guns. They control our education system and continue to twist it into a far-left parody. They despise free speech and try to shut up those they disagree with. They will organize boycotts of any company – such as Chick-fil-A or Hobby Lobby – if they think management is conservative.

And yet, so-called “conservatives” still proudly proclaim themselves to be Never Trumpers. For my part, I’ve gotten past the personality traits that Trump has that I don’t particularly enjoy. Instead, I focus on his excellent Supreme Court nominations, his approach to a reasonable climate change regimen, and his general adherence to the Constitution.

Never Trumpers may have a sincere belief that Donald Trump is not the right man for the job. That’s their prerogative. But take a close look at the Democrats that are running to replace him. Trump has done a very good job in many areas. With one election, that could all change. Be careful of what you wish for. Things could be a whole lot worse.