I never met Leonard Nimoy. But I DID have an amazing experience involving the late actor who played the iconic “Mr. Spock” on Star Trek. Strangely enough, it wasn’t about Star Trek at all, but rather a new space opera called “Star Wars” – and another movie entitled “Close Encounters of the Third Kind.”

It took place in early 1978 while I was working alongside Dallas radio legend Alex Burton at KRLD. One day as I sat at the KRLD edit desk, Alex walked over and asked if I’d be interested in working with him on a project for the Dallas Symphony Orchestra. 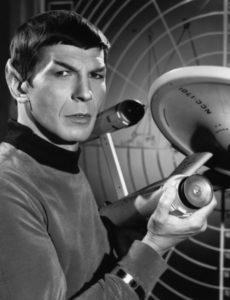 Star Wars and Close Encounters were taking the country by storm, and the Symphony was planning a major concert to use science fiction to inject some culture into the masses.

Alex explained that the Symphony was going to perform “The Suite from Star Wars” and music from Close Encounters of the Third Kind and 2001: A Space Odyssey, along with portions of “The Planets,” an orchestral suite by the English composer Gustav Holst, written between 1914 and 1916.

It was going to be called: “A Star Wars Encounter.”

I readily agreed. Alex Burton was a big name in Dallas radio and an accomplished writer. I wanted to be a part of this – but, still, I was a bit nervous. I had penned a short story or two, but mostly what I had written was news stories. Alex, however, was not intimidated in the least. 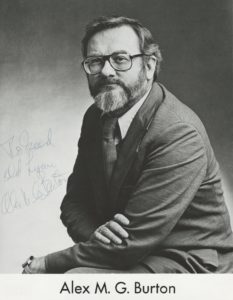 Alex Burton signed this publicity still for me when we worked together at KRLD in Dallas.

We had several meetings with people from the Symphony and a company called Showco – now famous for providing equipment for big time stadium concerts for acts like Led Zeppelin, Three Dog Night, and James Taylor.   Showco’s job was to liven up the concert with state-of-the-art laser effects. Alex and I got a preview at the Showco office so we could better understand what they were going to do.

It was going to be a big show and it required a big venue. This was long before AT&T Stadium was even thought of; in fact, Reunion Arena had not yet been built. So the concert was set for Moody Coliseum on the campus of Southern Methodist University, home of the SMU Mustangs and World Championship Tennis.

The music would be under the direction of the Symphony’s own Maestro Eduardo Mata. It would be sponsored by Burger King. 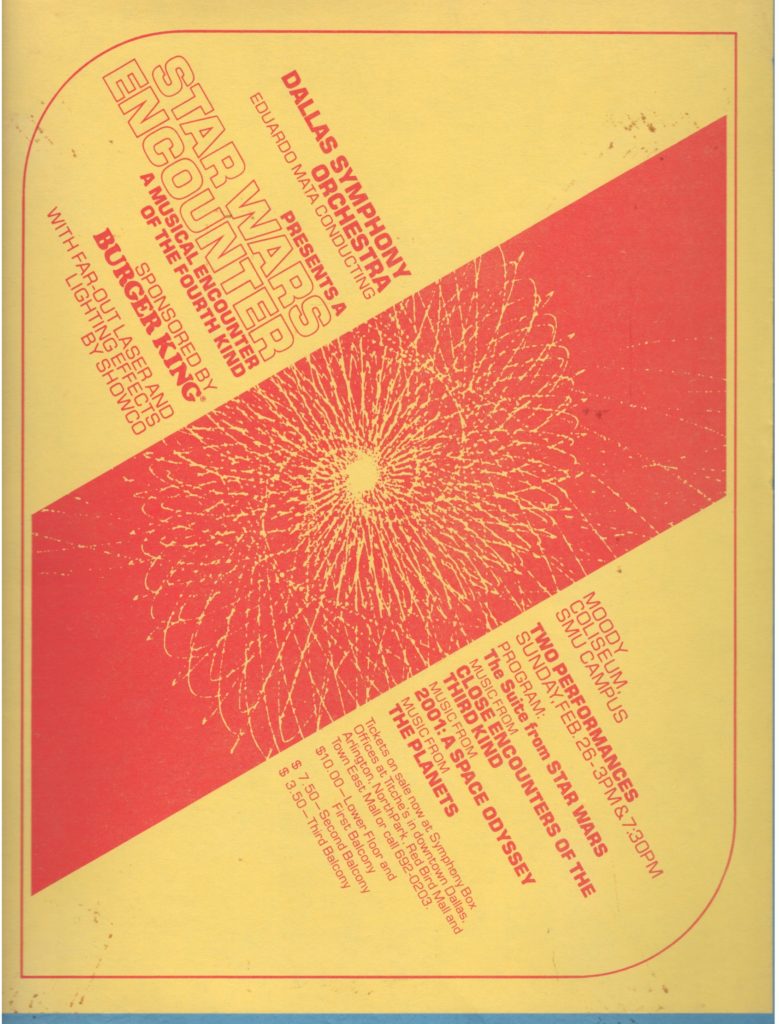 The cover of the “Star Wars Encounter” press kit

The Symphony’s Chuck Strother issued a four-page news release announcing two performances scheduled for Sunday, February 26, 1978, and detailing what Showco was planning to do.

“…The dazzling laser-light production effects will envelop the audience and visually electrify the orchestra in undulating patterns of eye-staggering colors and forms of electronic light. Special effects and staging include a mammoth rear screen, nearly two-and-a-half stories high and sixty feet wide, upon which continuous ‘outer space’ effects will flash through the genius of computer and from the imagination SHOWCO [referred to in all-caps] personnel.

“The full orchestra will be strategically staged on semi-circular risers with Maestro Mata conducting from an under-lit, Plexiglas podium. A synthesizer stage left and a narrator stage right will be showcased on comparable and dramatically lit risers, while the entire performance area will be constantly bombarded by a battery of illumination.

“Both performances will be highlighted by dramatic readings from an original script commissioned by the DSO as written for them by Alex Burton, KRLD radio personality, and KRLD news editor (and science fiction writer) Lynn Woolley. A professional actor/narrator will soon be announced…” 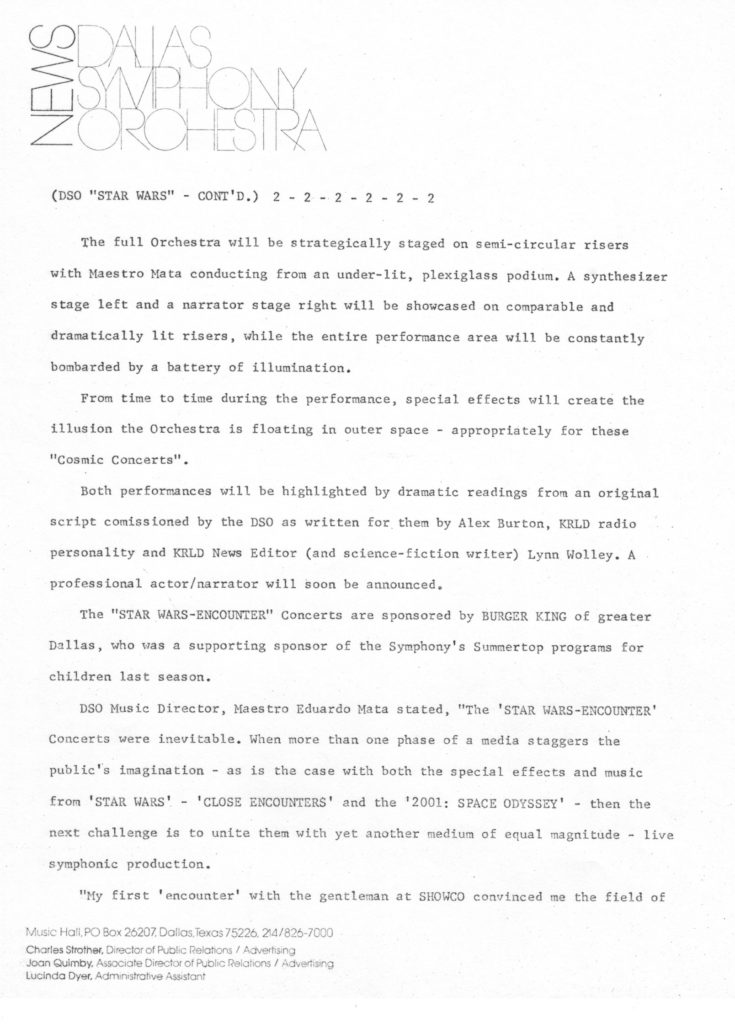 Page 2 of the news release with my name misspelled as Wolley.

So there it was! My name practically in lights! But who would be the narrator?

That announcement was still to come, and so Alex and I got about the business of writing the script. He came over to my apartment on Buckner Boulevard with a six-pack of beer in hand, and we began to bang away on two manual typewriters.

Alex got to work on “The Planets” while I concentrated on “Star Wars.” After some thought, I typed:

“Is there anyone there?”

An awesome beginning, huh? But now what? Alex’s typewriter was sizzling. I had to write something – anything. And so…

I pounded out a couple of pages about an earthbound human staring skyward, wondering what would happen if contact were made with aliens. When I was done with it, Alex made a few suggestions, and soon, we had this:

“Is there anyone there? Is man alone in this evolutionary journey? Could this blue marble be the only visited planet among the millions – no billions – of possible solar systems that might exist in a myriad galaxies? No! It seems unlikely that whatever gods attend to the matters of the universe would concentrate their energies in this single speck. So – from the first cosmic cough that split the primal atom and formed our universe – man has wondered at the heavens…wished on stars … and hoped for brothers.

“Even now we refine our technology … hoping someday to seek out strange, new worlds – to boldly go where no man has gone before. But what if we are not the first to conquer the barriers of time and space? If the first close encounter should happen on earth … we must be prepared. But how?

“The scholars say we must greet them with a Pythagorean Theorem scratched out in the dust – a geometric map to understanding. The teachers would come with books, saying, ‘there is much we can learn…’

“A linguist would offer communications through words; a composer through music.

“The merchants would meet them with goods to trade, and inquiries on marketing procedures. What is fashionable in Andromeda?

“Engineers would bubble with curiosity. How is it done?

“Disseminators of the news would scratch their impressions into skinny notepads, while brandishing all manner of electronic paraphernalia.

“Politicians would arrive with a smile … a handshake and a treaty of division of the space between.

“Soldiers would greet the invaders with military strategy: stockpile the guns, the ammunition, the bombs! We must prepare for war!”

The Symphony changed that last line, leaving out the words “for war.” Well – the movie was called Star WARS – so…

That part about the Pythagorean Theorem was Alex’s but I think most of the rest of this was mine. I used a line from the Star Trek intro (including the split infinitive) and a lot of imagery that must have come from the opening sequences of my all-time favorite movie – “The Day the Earth Stood Still.” The bit about the “primal atom” was from a Gardner Fox story for DC Comics.

Still, the piece needed a closing sequence to add a sense of wonder. Alex read it over, put the paper back into the typewriter, and without hesitation, wrote these words:

“At the edge of infinity, a country parsec from this space, a many tentacled figure stands beside a magenta stream, and gazes into his amber sky. He wonders. Is there anyone there?”

That gave me chills. Two-and-a-half lines – and yet, they provided the real impact of the entire piece. Damn him!

Alex was indeed a fabulous writer – and fast. He wrote most of the rest of the narration. We STILL had no idea who was going to read it.

Then, on February 10, the Symphony issued a memo to all involved in the production:

“Please find attached the retyped text for the Star wars Encounters as written by Alex Burton and Lynn Woolley… Tentatively, Leonard Nimoy will be the narrator. This is not for public release.”

The big day came at last and Moody Coliseum was jam-packed. WFAA-TV (Channel 8) taped one of the performances for television, and Leonard Nimoy narrated and Showco dazzled the crowd with laser effects. 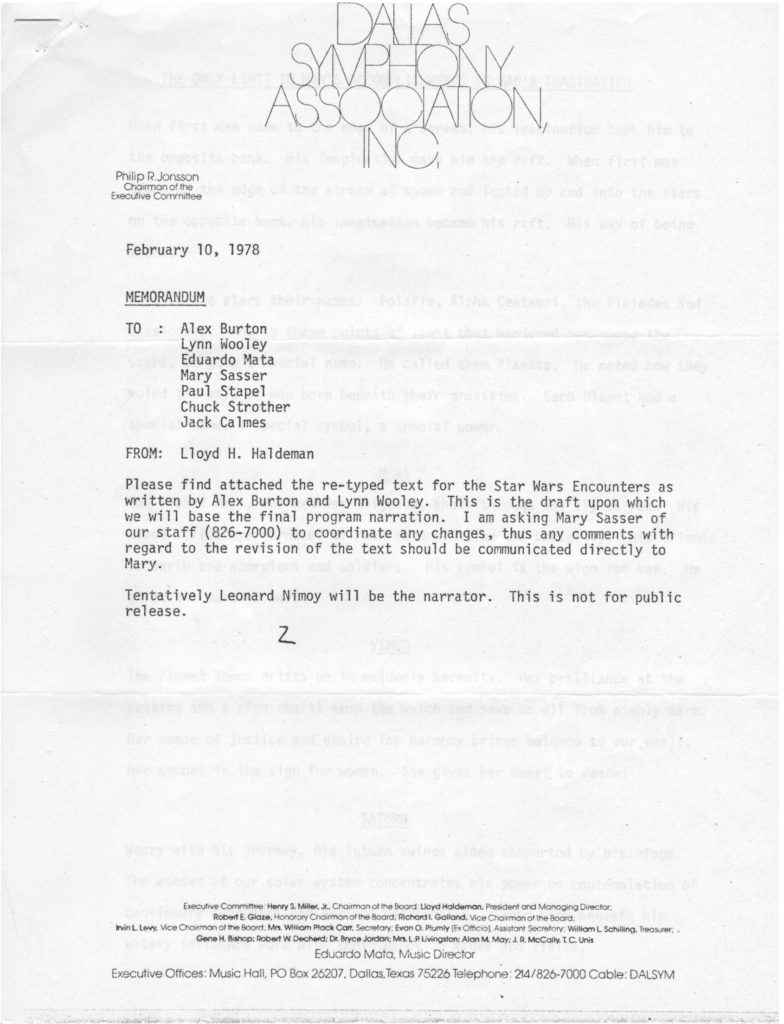 The memo announcing Nimoy as narrator from February 10, 2978. This time, my name is misspelled as Wooley.

We lost Alex Burton on September 13, 2012. And now we have lost Leonard Nimoy.

Alex was among the last of the great radio commentators in the mode of Porter Randall and Paul Harvey; Mr. Nimoy was one of the last of a vanishing breed of Hollywood actors who appeared in the old movie serials, having ventured into space long before Star Trek in “Zombies of the Stratosphere.”

From Alex Burton, I learned the joys of writing. From Nimoy’s Mr. Spock, I discovered the value of logic. My long-time radio sign-off of “Be Logical” is a tribute to him.

Somewhere, on the edge of infinity, I can picture Alex beside a magenta stream under an azure sky with a typewriter on his lap. Perhaps he’s meeting Leonard Nimoy and working on a new story in a place of great reward where they will live forever. And prosper.

Material for this article came from my 1994 book “The Last Great Days of Radio,” and from the “Star Wars Encounter” press kit – which I still have.