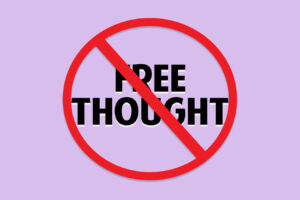 Free thought. Dissenting points of view. These aren’t popular concepts in government institutions and perhaps nowhere has that resistance been more visible than with school district administrations.

Whether to appease advertisers, maintain good standing as a member of Team Local or a go-along-to-get-along tactic for conflict (and journalistic standards) avoidance, an “only happy talk” news stance is the acutely apparent norm.

That said, sympathetic portrayals are occasionally thrown in for those times when districts attempt to flip a defensive posture to offensive in response to criticism or other unavoidable situations.

One such situation surrounds potential electioneering in Belton Independent School District’s recent bond election. The situation only intensified after Belton ISD Superintendent Matt Smith’s interview with the Temple Daily Telegram in which he said, “We believe we followed the law and it bothers me to know that some people question that.” The resulting public education confidence decline should come as no surprise as discussed in Anderson: Texas School Districts Must Face Loss of Public Confidence.

With these situations, kudos to the Telegram for three recent Letters to the Editor showcasing that pesky free thought which school districts so abhor.

This letter by CJ Grisham addressed Ott’s comments in the aftermath of the Uvalde school shooting.

Give teachers chance to defend students

I read with great interest the story on government officials’ addressing school safety and was shocked at the lack of willpower to even discuss the one issue that would most protect our kids: let teachers defend themselves and students.

Dr. Bobby Ott said “there’s a lot of concerns” for trusting teachers to responsibly carry guns in self defense. His preference would be to add school resource officers. The same SROs that repeatedly failed to protect kids by cowering outside or refusing to enter a school during a shooting? Putting one in every classroom is not possible.

TISD doesn’t keep track of how many teachers are veterans (i.e.: trained in firearms to handle stressful situations). I personally know nearly a dozen who are either veterans or in the National Guard/Reserves.

Why doesn’t Ott trust them to protect students? Does Ott believe teachers have no lives outside the classroom and are not intelligent enough to get training on safe gun possession and usage? Or does Ott simply not trust his teachers because they aren’t mentally stable enough to carry a concealed handgun in self-defense? These are valid questions, if hard to swallow.

Refusal to even debate merits of allowing law-abiding trained teachers to voluntarily carry concealed in defense of students if they choose to says Ott doesn’t want to seriously debate or even consider issues that go against his leftist policies to brainwash kids into thinking that there can’t be a positive reason for a citizen to be armed.

With regard to BISD Superintendent Matt Smith and the recent bond election, the Telegram published a condensed version of a letter by Gregory Daniel. Having received the full letter, we have included the piece in its entirety.

Sincere parents teach their children to follow the spirit of the law, not just the letter of the law. Imagine telling your child not to watch TV until homework is completed. Two minutes later, he’s watching TV. When you ask what’s going on he replies you said not to watch TV. You didn’t say not to watch cartoons on a laptop! That child is following the letter of the law. I imagine you would at least have a conversation to explain that behavior is unacceptable! And, that it will not be tolerated. (Some parents would bust that behind for patronizing behavior and answers like that.)

Now imagine that child paying advisors $71,500 to come up with that answer. And going on TV to say he did nothing wrong.

That’s exactly what BISD Superintendent Matt Smith did tonight at 10 o clock on KCEN news. BISD spent $71,500 of your hard-earned tax dollars on advisors. The advisors told them a path to get enough YES votes and stay out of jail. Is that the standard you have for your child? Stay out of jail?

Matt Smith said yes, they handed out stickers, but the sticker didn’t say vote yes. But your child was used as a pawn in a marketing scheme.

At the end of each presentation, he said I can’t tell you to vote yes or no. The lie by omission tactic speaks for itself. He never told one single downside to this bond. As a matter of fact, he and others made you feel dumb if you asked relevant questions.

So, who paid for the door knocker’s $1,200/week plus expenses? The superintendent’s answer …. Vote Yes campaign! But who are these shadowy individuals who seem to have bottomless pockets when it comes to spending money on stickers, signs, door knockers, etc.? One can only imagine these big contributors are the construction companies who get the contracts and others who will benefit financially from this boondoggle project. I’m sure they love kids…. right? Making millions is just a side gig.

Bottom line is citizens, teachers, anyone that can vote was manipulated with one tactic or another to vote YES. Did BISD cross the line and not follow the letter of the law. I believe YES!

One thing we know for sure is our small, closely knit town has higher values than whatever it takes to get YES and stay out of jail!

Superintendent Doctor Matt Smith, in BELTON we don’t take $71,500 of taxpayer money to lawyer up and follow the letter of the law. Our parents train us to follow the spirit of the law.

Edmund Burke: “The only thing necessary for the triumph of evil is for good men to do nothing.”

Stand up friends, iniquity is at your doorstep.

And Richard Lewis also weighed in on the Belton ISD bond election.

Dr. Matt Smith “….doth protest too much, methinks” was the impression I got from his tone defending the recent BISD bond issue.

I would as well considering how Belton advertised it to voters. He stated, “we consulted with our legal counsel” and no doubt that is true. They courted your vote with, “at the same rate” posted everywhere and were successful in passing the bond request by the slimmest of margins due to voter apathy and deceptive advertising. Speaking with many people, they interpreted that their taxes wouldn’t go higher, they were wrong.

They should have presented it like this. BISD passed a bond issue of $138 million about four years ago, and now added $173 million. They’ve retired almost $13 million of the previous bond issue, so the remaining balance is $125 million. Now if you owe $12,000 on a credit card and then add $17,000, it’s still “at the same rate” but does your payment remain the same? No, it doesn’t, nor will your taxes. Although entirely legal, it deceived many voters. As a BISD graduate, this embarrassed me.

In an economy that’s plagued by rampant inflation, especially in food and gas prices due to insidious Democrat leadership in DC, families have had to cut back, but not BISD. When the recession hits and you feel angry, remember that you were deceived by the school board. Vote out every single one of them when they’re up for re-election. If you don’t, then you’re complicit in their deceit and granting them the trust they betrayed and no longer deserve.

Peer pressure and bullying are mainstays of the public education playbook. Though resoundingly decried in character education programs, they are alive and well within the inner workings of the education industry. They certainly show themselves during bond elections and at any potentially controversial policy discussions that might occur in public.

One has to suspect that the management by intimidation approach prevalent within school administrations deters independent thinkers and instead establishes a go-along-to-get-along mindset as necessary for long-term survivability in public education orbits –  whether as an employee, community associate or those seeking “most-favored parent status.”

People are hesitant to speak out against school districts – even when their concerns are legitimate, justified. After all, doing so in today’s charged climate can land any outspoken individual labelled a “domestic terrorist.” With that, it’s all the more important that dissenting voices be heard.

Thank you to the Temple Daily Telegram for publishing perspectives outside your routine education industry reporting. And thank you to the three individuals courageous enough to express thoughts not appreciated by some, but likely reflective of many throughout our communities. Courage is contagious. Let these examples serve to spread more around.