Editor’s note [spoiler alert]: This is a rare instance of a movie actually being better than the source material. “Farewell To the Master” was a short story written by Harry Bates (1900-1981), and once it was adapted for the big screen, it became the story he would be remembered by. But the movie is far different from the story. Both the story and the movie portrayed aliens as superior to humans both technologically and morally. But in the story, there is a twist ending – a punch line through which it is revealed that the alien Klaatu is actually working for the robot.

The robot, Gnut in the story and improved to Gort in the movie, was preparing to depart Earth and was asked to impart to his master – the “master yet to come” — that Earth was sorry for what it had done to Klaatu. As the mighty ship roared back into space, Gnut’s answer is revealed in the final graph: “You misunderstand, the mighty robot had said. “I am the master.” May I suggest you see the movie first, and then seek out the short story? The movie is drop-dead awesome, and the story stands in its own right. (Lynn Woolley 8/2/20.) 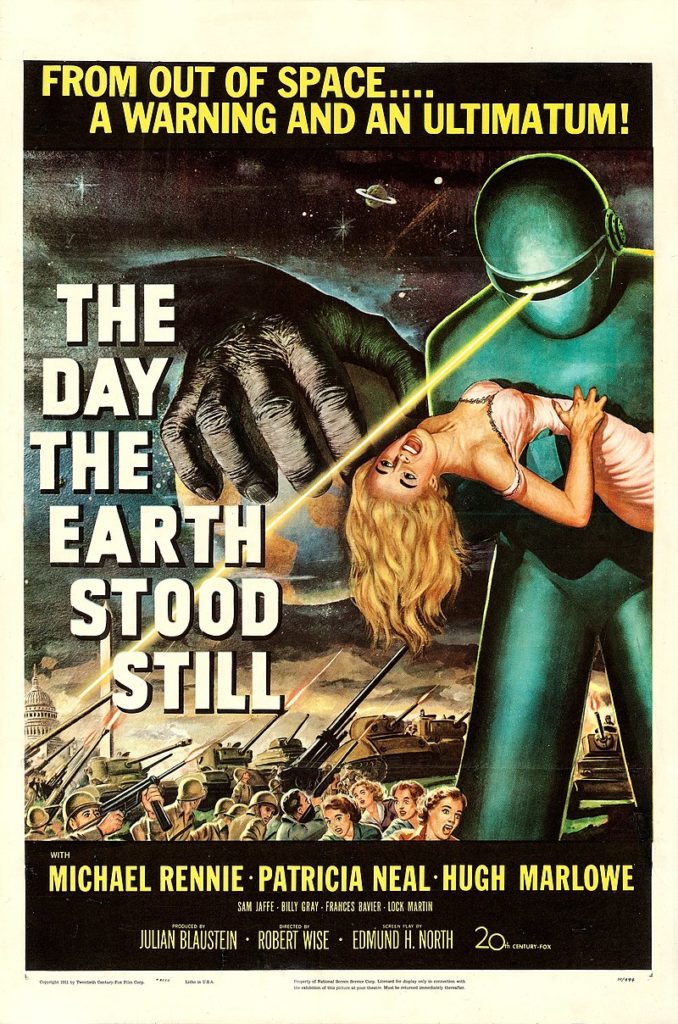 My favorite movie is a 1951 black and white picture called “The Day the Earth Stood Still.”

It’s always been my favorite — from the time I saw it as a child on NBC’s original “Saturday Night at the Movies” — until the most recent time I viewed it a couple of weeks ago on AMC.

Video:  Klaatu emerges from the saucer, as the world watches.

I don’t know how many times I’ve seen this movie because I’ve lost count.

I own two copies on tape, and sometimes someone will say, “you’re watching THAT movie again?” I never get tired of it, even though some would say it’s dated, or interpret it as 1950’s “reds under the beds” cold war noir. Or, perhaps some would say it’s a liberal allegory about peace. But not me! Nope, I see conservative values all through this movie. 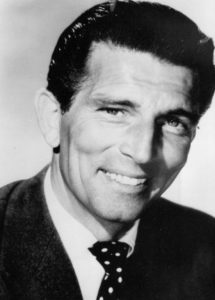 For you uninitiated, let me tell you just a bit about “The Day the Earth Stood Still.”

It’s taken from a short story called “Farewell to the Master” by Harry Bates. Robert Wise directed — the same guy who directed “The Sound of Music,” West Side Story,” “The Andromeda Strain, and even “Star Trek — the Motion Picture.”

The story is timeless and brilliant.

Klaatu’s saucer lands on the Washington Mall and is soon surrounded by a military cordon. After hours of waiting with the world watching on live TV, the ship opens and Klaatu and Gort emerge. But a trigger-happy soldier shoots Klaatu. He is taken to a hospital where he heals instantly while Gort stands motionless near the ship.

Video:  The shooting of Klaatu and the emergence of Gort.

Klaatu demands an audience of all of earth’s leaders, but the authorities tell him that’s not possible. He escapes from the hospital and becomes “Mr. Carpenter,” finding a room at Patricia Neal’s boarding house. There, he makes friends with young Bobby, and begins to look for a way to convince the earth’s leaders to convene. Bobby introduces him to a professor who is only convinced after Mr. Carpenter solves a complex and vexing mathematical problem. Mr. Carpenter leaves the University armed with an idea.

Some time later, electricity fails. Everywhere — all over the world. Only planes in flight and hospitals are spared. Carpenter — Klaatu — is caught on an elevator with Patricia Neal during the time the Earth stands still, and she is convinced of the seriousness of the situation. Still, earth’s leaders are skeptical.

The order is put out to take Klaatu — dead or alive. As he rides in a cab with Patricia Neal, he tells her the words to say to the robot Gort in the event of his death — Klaatu Barada Nikto. “What can he do?” she asks. “He can do anything,” is the answer. “He could destroy the earth.”

As he leaves the cab, Klaatu is shot and killed. Patricia Neal goes to the saucer where Gort still stands. Before she arrives, the robot’s laser eye disintegrates two soldiers who try to tamper with him. As she comes on the scene, he moves and she falls nervously to the ground. The robot’s visor opens and the laser beam is aimed in her direction. Will she remember the words?

She does — at last. “Klaatu Barada Nikto. Gort, Klaatu Barada Nikto.” The Robot picks her up and together they steal the dead alien’s body, taking it inside the otherworldly vessel. Gort places the dead Klaatu on a table and works the magic of an alien science.

She asks the right questions. “He has power over life and death?” Klaatu says no. That power is reserved for God. This is only a technique that can restore life for a brief time.

Meanwhile, outside the ship, some VIP’s have finally gathered. As Patricia Neal joins them, Klaatu stands on the lip of his spaceship with Gort towering by his side. He speaks and finally, someone listens.

He tells of a federation of planets that made war, but searched for peace. In desperation, they created a race of robot policemen — such as Gort. These robots have total power, but will do nothing unless an aggressor emerges. Long aware of earthlings, none of these extraterrestrials cared — until the atom bomb was built. Now, Earth has the power to threaten intergalactic peace. The day the earth stood still was a warning. Make war, and the robots will turn the earth into a burning cinder. Or join the galaxy in peace.

Klaatu and Gort enter the spaceship and blast off as credits roll.

Video:  Klaatu’s final words to the people of Earth.

The acting is crisp, the direction is taut and the movie still packs a punch.

It’s better than “Close Encounters” and it’s a thousand times superior to such modern pabulum as “Independence Day.” But what does it mean? What’s it all about?

Heck, I can easily enjoy this move just as a great motion picture. But is it an anti-Communist film? I don’t know and I don’t care. What about the obvious savior-come-back-from-the-dead scene? Well, some might be offended, but I found the movie to be reverent and respectful of religious beliefs. Is it a liberal peacenik movie? You could say so.

But to me, this movie says some very conservative things. It says: if you accept responsibility, you will be free. It says: there are some laws on how to use weapons. Obey the law and you can keep your weapons. Use the power wisely and nobody gets hurt. (Remember, Klaatu didn’t take away the nuclear weapons.)

And what about the parallel between the robot police force and the United States? The Robot Police were committed to peace; they had NEVER made war, had never been the aggressor. But they had the ultimate power, and because they did, other nations, other worlds remained at peace.

If you’ve never seen this movie, rent [stream] it. Watch it a couple of times. Even after fifty years, “The Day the Earth Stood Still” is in a class by itself.