America Must Have Honest Journalism to Combat Corrupt Government

Klingenstein: Why Trump is the perfect President for our times

It’s so hard to believe how many of our precious childhood heroes are gone. In recent months, we’ve lost Gene Autry, Roy Rogers and Kirk Alyn. And on December 28, we lost the Masked Man himself — Clayton Moore, the Lone Ranger.

Clayton Moore was 85 years old, and for most of those years, he WAS the Lone Ranger.

It’s not that he didn’t have other roles — he did. He worked in a circus trapeze act and as a model before his first role in the serial “Dick Tracy Returns” in 1938. But when Clayton Moore donned the white hat and took his place on Silver alongside his faithful Indian companion Tonto, he became the Lone Ranger, almost in fact.

“Once I got the Lone Ranger role, I didn’t want any other,” Moore said in a 1985 Los Angeles Times interview. And in a 1976 interview at the Adolphus Hotel in Dallas, Moore told me that he never had a problem with typecasting such as other actors had with such roles. He said: “Nope. The Lone Ranger wore a mask.” 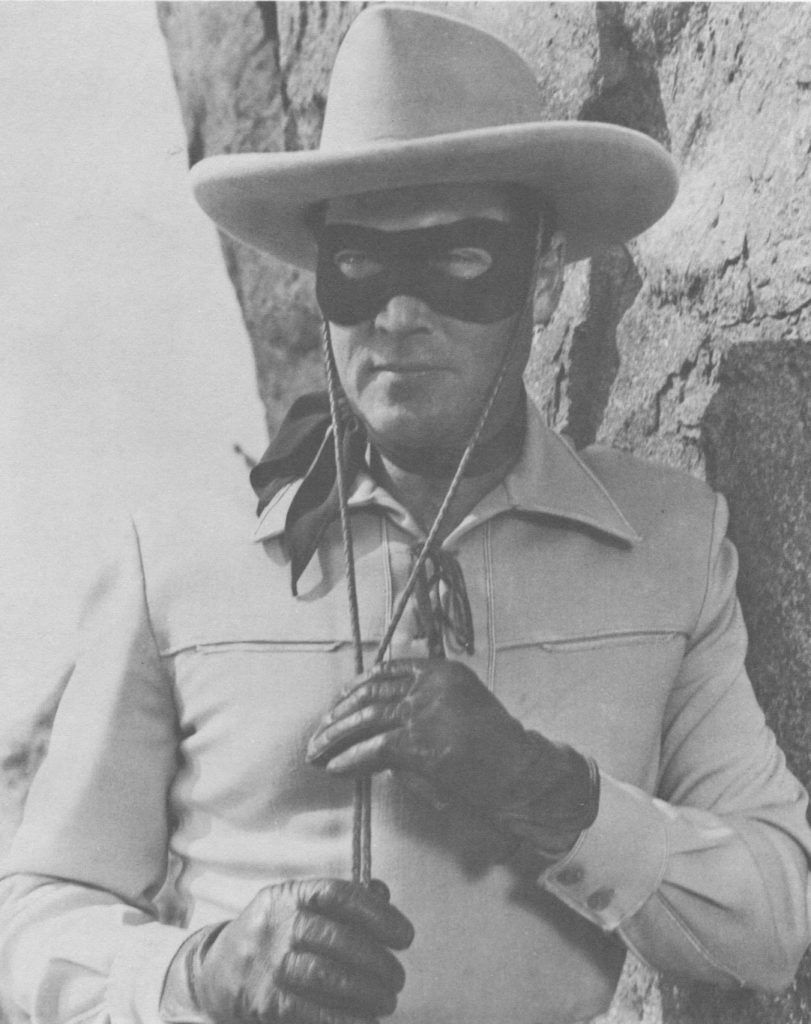 This photo of Clayton Moore as the Lone Ranger was included in the printed program of “The American Nostalgia Convention” in 1976, where I met and Interviewed Clayton Moore. (Scan by Lynn Woolley for WBDaily)

The show was a big hit for ABC in the early 50’s when ABC wasn’t much of a network.

The show was unforgettable to the millions of kids who idolized Moore and his character, and years later, a major movie starring Klinton Spilsbury was planned. Moore was told that he could no longer wear the mask. He was reduced to wearing wrap-around dark glasses instead before the new movie flopped and the courts restored his right to wear the mask.

In his final years, he lived in retirement at his home in Calabasas. He and his late wife, actress Sally Allen, had one daughter, Gwen.

Unlike many of today’s stars — the NBA’s Dennis Rodman comes to mind — and political leaders like our President [Bill Clinton], Clayton Moore took his status as a role model seriously.

In the Dallas Morning News on January 7, a letter from Art Greenhaw (a member of the Lightcrust Doughboys) attested to it:

“Years ago, I wrote a letter to actor, showman and folk hero Clayton Moore requesting a photo. I enclosed a check for my purchase and was fascinated but not surprised when Mr. Moore sent back a photo along with my check, which he returned uncancelled. Would that every boy lived and breathed not only the Lone Ranger’s philosophy and creed of justice but also Clayton Moore’s.”

In the same issue of the News, Dallas lawyer Alan Kazdoy wrote an op-ed piece about the fallen Ranger.

Here are some excerpts:

“I learned from the Lone Ranger that it was important to do good deeds merely for their own sake, without the expectation of reward or gratitude… Not only would he refuse any type of payment for his good works, but almost never was around at the end to accept thanks from the people he’d helped… He was so lacking in ego that he never even introduced himself… I learned that, even at a time when legally sanctioned racial discrimination existed in America, it was possible for people of different colors and cultures to treat one another with respect. Tonto, played by Jay Silverheels, an authentic American Indian, wasn’t just a servant or a sidekick; he was a true companion. Even as a child, I was impressed with the way the Lone Ranger respected Tonto and treated him not as a subordinate, but as an equal… Now, with the demise of Clayton Moore, my only regret is that I must echo the words of the townspeople at the end of each episode, when the Lone Ranger rode off into the sunset: ‘I didn’t even have a chance to thank him.’”

For my own part, I think the fact that I met and interviewed Clayton Moore has given me perspective.

Mr. Moore and Kirk Alyn, who was the first actor to play Superman in two 1940s movie serials, both answered every question I had on that afternoon at the Adolphus Hotel in 1976. As Mr. Moore signed “The Lone Ranger,” so did Mr. Alyn sign his autographs “Superman.” Both men had played the roles of proud American icons and both were justifiably proud of the roles.

Just a few months ago, I drove up to Dallas for another nostalgia convention to meet another boyhood idol, Gordon Scott.

Mr. Scott played Tarzan in a few mid-50s films, and I had always considered him the best Tarzan other than Johnny Weissmuller. Mr. Scott was amiable and willing to discuss the old days, but made it quite clear that he did not enjoy playing Tarzan and he thought the movies were “crap.”

Clayton Moore’s bio from the convention program. (Scan by Lynn Woolley for WBDaily.)

How different from Clayton Moore.

As Alan Kazdoy said in his column, “It sometimes was difficult to pinpoint where the Lone Ranger’s persona ended and Clayton Moore’s began.” How true. And how wonderful!

Lynn Woolley is a Texas-based author, broadcaster, and songwriter.  Follow his podcast at https://www.PlanetLogic.us.
Check out his author’s page at https://www.Amazon.com/author/lynnwoolley. Order books direct from Lynn at https://PlanetLogicPress.Square.Site.
Email Lynn at lwoolley9189@gmail.com.