I watched the September 29 debate in Cleveland with both hope and fear.

My fear was that he would turn this into a street fight, and would not allow Biden to trip himself up. As it turned out, Trump rescued Biden from his meandering and utterly false statements time and again. When Biden has two uninterrupted minutes to speak, he will collapse. 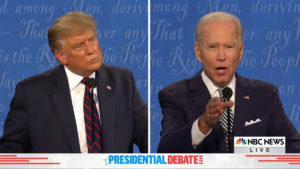 He never had two uninterrupted moments.

I went to bed thinking Trump had totally blown it.  I woke up thinking Biden would win and there would be no more debates.

By afternoon, having seen clips on TV and heard sound bites on the radio, I began to realize how bad Biden was.

WORST BIDEN MOMENT:  (After Wallace asked about the Senate filibuster and packing the Supreme Court) Biden said That’s not the issue, and the issue will be whatever I decide.  (Huh?) Then, he launched into a public service announcement for voting.  That was Wallace’s worst moment, because he failed to get a straight answer.

SECOND WORST MOMENT:  Essentially promising to shut down the economy if “scientists” tell him to.  (While blaming Trump for a collapsing economy.  Can he have it both ways?  he can on CNN.)

THIRD WORST MOMENT:  Biden pretty much told us his new slogan is “Buy America First Again.”  I guess appropriation is the sincerest form of praise.  (Here’s a FOX story about Biden’s plan.)

BEST TRUMP MOMENT:  The prepared line about having done more in 47 months than Biden has accomplished in 47 years.  That must have stung, because it is so true.  In your mind, list Trump’s accomplishments.  Then Biden’s.  See what I mean?

The debate was classic Trump and it was not pretty.

I was hoping for the “Rally-style Trump” because the rallies are wonderful!  We got street-fighter Trump and the best Biden could do was spout lies about how many people have existing conditions and how Trump is responsible or every single coronavirus death.  Biden also seemed to indicate that the riots were Trump’s fault, saying that they happened on his watch.  (Note that the rioters are Biden’s voters.)

More telling is that Biden could not find any explanation for his party’s leftward lurch or explain what he would do about it.

I suppose if Wallace had asked him why he chose a running mate who thinks he’s a racist and who is considered by many to be the most liberal person in the U.S. Senate, he would have just said “Will you shut up, Man!”

Looking at morning newspapers and surfing a few internet stories, it seems the latest Democrat strategy is to attack Trump for not condemning “white supremacy.”  No one on the Right is saying there aren’t any white supremacists, but this is a “manufactured crisis” to use their language.  White supremacists are not burning down buildings in Seattle, Portland, Kenosha, Minneapolis, and New York.  Those people are Antifa and Black Lives Matter anarchists.  THEY ARE DEMOCRATS.  The AP story is written from a Biden point-of-view.  Perhaps Trump should issue a full-throated  repudiation of white supremacy on the same day Joe Biden condemns the co-called “peaceful protestors” who are constantly thrusting their middle fingers into the faces of policemen, and sometimes ambushing them and shooting them.  This AP story from Steve Peoples, Will Weissert, and Kevin Freking is journalistic malpractice. 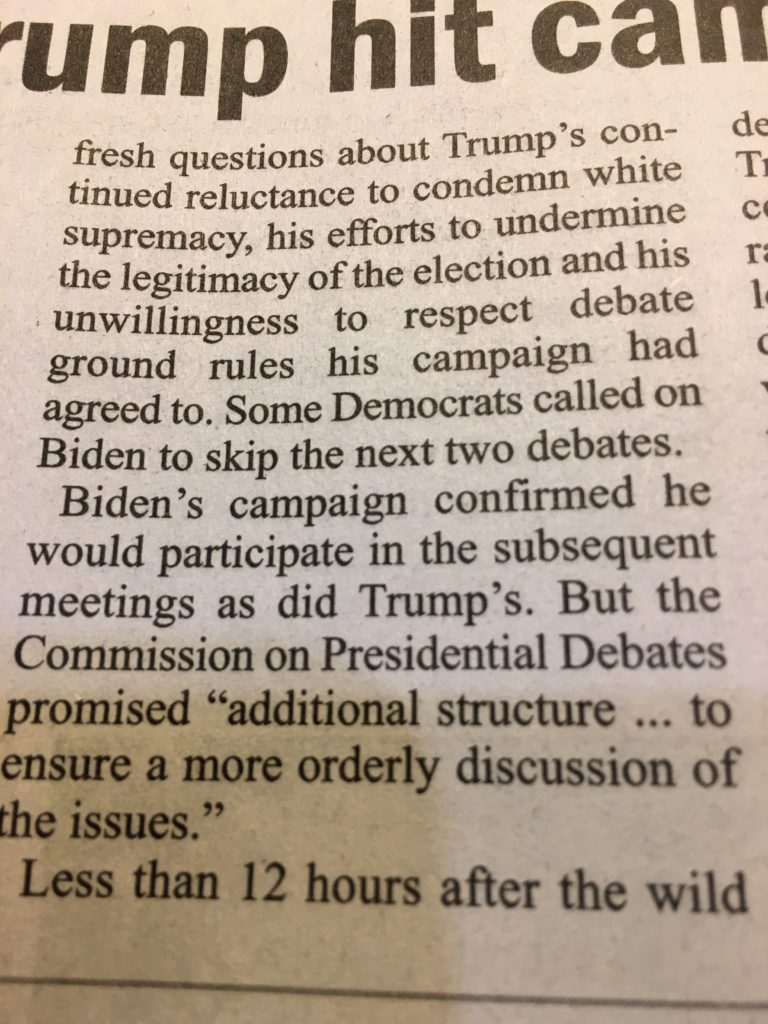 Tags: Biden on packing the Court Cleveland debate Lies of Joe Biden Trump vs Biden Trump-Biden debate Will you shut up man