There are no words.

A little girl, 14-year-old Daisy “Jupiter” Paulsen was skateboarding to her mother’s home on June 4th when she was brutally attacked and stabbed some 25 times according to published reports. 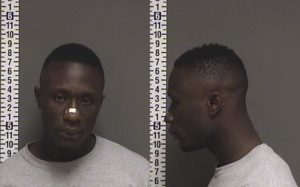 The man that has been charged in her death, 22-year-old Arthur Prince Kollie, told police he was on methamphetamine and hadn’t slept since taking the drug.

He said he had no recollection of attacking the child. Initially charged with attempted murder, Kollie asked police what that term meant. He asked if the girl was alive. She was briefly, but Kollie didn’t leave her with much of a chance.

On Thursday, June 10th, Jupiter’s friends, family, and staff at Sanford Medical Center in Fargo honored her and said goodbye before she was wheeled into an elevator and taken away to have her organs harvested.

How different from the George Floyd case.

In the Floyd case, a white policeman name Derek Chauvin was convicted of murdering a black street thug. The Marxist organization called Black Lives Matter immediately fitted Floyd with a halo and began to use his death to raise money, suborn rioting and pillaging, and start a movement to defund the police.

In the case of Jupiter Paulsen, Black Lives Matter has been silent so far as I can tell. No one in Fargo rioted. No one else was killed. No property was destroyed. No businesses burned down. There was no insurrection such as we saw in Portland and Seattle. No autonomous zone was set up. There was only a modest memorial where people could leave flowers or toys in mourning for an innocent life lost.

No black “civil rights leaders” showed up to demand justice for Jupiter.

Jesse Jackson has yet to make an appearance. Nothing so far from Al Sharpton. Even Maxine Waters, who encourages violence at every turn, failed to show up to speak out for Jupiter.

CNN has not offered wall-to-wall coverage like they did for the CNNsurrection on January 6th. You probably haven’t seen the story in your local newspaper. This story does not fit the narrative. Like Tony Timpa, Jupiter is not newsworthy because she was the wrong color – as was her killer.

In the racially charged times in which we live, those of us that remain sane must call out the hypocrisy of the politically-correct Left whenever it occurs. Perhaps in this case, Jupiter’s story should be added to the curriculum of Critical Race Theory to lend some balance.

George Floyd was a black man high on drugs – essentially in the process of committing suicide by overdose. His “killer,” Officer Chauvin, kept his knee on Floyd’s neck for nine minutes but likely did not realize that Floyd was so near death.   Floyd had passed a counterfeit bill, and had resisted arrest. Chauvin made a terrible mistake while likely believing that he was doing the right thing. He may very well have been a bad cop, but he didn’t attack Floyd out of the blue for no reason.

In Fargo, a teen-aged girl was skateboarding home. She had not passed a counterfeit bill, nor was she high on anything. Her attacker, Kollie, was high by his own admission. According to Jupiter’s parents, her backpack and cellphone were missing at the crime scene. Kollie was found shirtless in a Walmart, taking clothes and changing into them. Kollie may have been drugged up and mentally ill but he knew enough to dump his bloody clothes and try to steal some clean ones.

America should know about Jupiter’s murder and the charges against Kollie.

This story ought to have legs. That’s news-speak for a story that has staying power in print and on the air. George Floyd’s story had them. But the colors were right in Minneapolis. “Brutal white cop murders helpless Black man” is a headline made to order for CNN and the Associated Press.

But it has to be white-on-black crime for the big left-wing media outlets to give a damn. Thousands of black-on-black shootings in Chicago each year garner little attention, except maybe on Tucker Carlson’s TV show. Don Lemon’s TV show isn’t going to go there.

The fact that the name “Tony Timpa” is not a household name is proof of what a feckless disaster our media is. It’s not likely that Jupiter’s story will resonate with the likes of Jeff Zucker, the boss of CNN, or with his snotty-nosed little assistant Brian Stelter who supposedly is a media critic. Propaganda networks like CNN report narrative and not news.

All black people are not Arthur Prince Kollie.

But all white cops are not Derek Chauvin, either. But cities burned. Black Lives Matter became a rich organization. Chauvin, who likely was guilty of manslaughter (though Floyd certainty could not have lived long given the drugs in his system), was nowhere near being a drugged up murderer and (as of now) it appear that is what Kollie was.

But don’t judge other people by what Kollie did.

You can go to South Chicago and find plenty of Kollies, but you’ll find plenty of Thomas Sowells too. When Floyd died, race-based groups took advantage and used the incident to stoke violence causing many more deaths. The political Right – conservatives – almost never act like that. The CNNsurrection is an example of the worst of conservatism, but even then, the media has made it out to be far worse that it already was.

The narrative fit perfectly for Zucker and his band of morons – I mean reporters.

Let’s hope Jupiter did not die in vain.

Perhaps some good can come out of the murder. Some child, someday, will have a new lease on life because of her organ donations – and that means a part of Jupiter will live on.

Some of us will have our eyes opened and see that crimes such as this are not characterized by white versus black but by good versus evil. On the whole, people, white and black, are good members of society. The rest of us should not be judged by what others do.

Finally, the political Left – including race based organizations like Black Lives Matter, individuals like Jackson, Sharpton, and Auntie Maxine are shown to be the corrupt race-baiters they are. The news media, mostly left-leaning, is just as corrupt as they are – probably more so.

So as Jupiter Paulsen is laid to rest, remember that in the eyes of the Left, an innocent 14-year-old is not as important as a street thug named George Floyd. And think about what we all can do to make this insane country sane again.