Typically it’s Democrats that are obsessed with race – not Republicans – so it’s interesting to see the Mainstream Media doing what it can to shift the so-called Conspiracy of “Great Replacement Theory” over to the GOP. 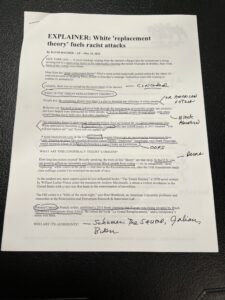 The Associated Press writer David Bauder [the Explainer] gave it the old college try, but his article isn’t convincing.

He’s right that a lot of conservatives believe it to a point. But they believe it because they hear it from Democrats and they see it at the southern border.

What sane country would welcome an invasion from many countries with different cultures? This one apparently, so long as Joe Biden is in the White House.

If it’s happening, it’s difficult to label it a theory.

Let’s take a closer look at some of what the Explainer says, and what he ignores.

His column that ran on May 16, 2022 and was dutifully carried by newspapers all around the country is entitled:

The second word the Explainer uses is “racist.” He doesn’t define the word, but seems to think that if any American dares to object to the changes that massive immigration has brought to our culture – that’s racist. It’s no such thing.

Most countries adamantly protect their values and cultures. Only in America have the people embraced a “melting pot” where new ideas and diverse thought are said to “enrich” the existing culture. But these changes (enhancements if you prefer) usually have been more gradual, and usually are a good fit with our values.

The Taliban, for example, has added some new cultural rules for women since Joe Biden unceremoniously departed without any semblance of a plan. Now, women in Afghanistan can only show their eyes in public. Correct me if I’m wrong, but I don’t think we want to do that in America.

So yes, it is perfectly reasonable to embrace an American culture and to protect it. That is the opposite of racism.

Next, the Explainer gets to white supremacy.

The white nationalist rally in Charlottesville, Virginia was the great gift to the Left up until the January 6 Capitol Breach. I’m not sure I have ever met a white supremacist, but they do exist. I’m not at all sure that they exist in the numbers Joe Biden would have us believe, but then he and Merrick Garland may be counting parents that attend school board meetings.

That brings us to the Buffalo supermarket massacre, which was different from the Waukesha drive-through killings because the Buffalo shooter was white while the Waukesha driver was black. Buffalo fits the narrative; Waukesha doesn’t, which is why Biden headed straight for Buffalo but never set foot in Waukesha. Besides, while blacks were obviously targeted in Buffalo, the Waukesha maniac murdered six people, all white (and some grandmothers).

So to connect Buffalo to “Great Replacement Theory” as Biden has done, and as the Explainer tries to do is the latest example of the Left’s mantra: Never let a crisis go to waste. Biden was an embarrassment as he politicized the tragedy when he was supposed to be comforting those who lost loved ones.

The AP is no better than Biden.

The Explainer would have us believe that what he calls “simple demographics” doesn’t matter. Is he serious? Democrats have been telling us for years “Demographics is Destiny.” Some have been downright nasty about it.

José Ángel Gutiérrez is a lawyer and professor at the University of Texas at Arlington. Back on August 8, 1999, he gave an interview to “In Search of Aztlan,” in which he talked about the “Reconquista” of the American Southwest.

He claimed that the United States has been an invading force:

We’re the only ethnic group in America that has been dismembered. We didn’t migrate here or immigrate here voluntarily. The United States came to us in succeeding waves of invasions. We are a captive people, in a sense, a hostage people. It is our political destiny and our right to self-determination to want to have our homeland [back]. Whether they like it or not is immaterial. If they call us radicals or subversives or separatists, that’s their problem. This is our home, and this is our homeland, and we are entitled to it. We are the host. Everyone else is a guest.

Speaking of “replacement theory,” Gutiérrez made no secret of his delight about white infertility:

It is not our fault that whites don’t make babies, and blacks are not growing in sufficient numbers, and there’s no other groups with such a goal to put their homeland back together again. We do. Those numbers will make it possible. I believe that in the next few years, we will see an irredentists movement, beyond assimilation, beyond integration, beyond separatism, to putting Mexico back together as one. That’s irridentism. One Mexico, one nation.

José Ángel Gutiérrez, in fact, was my introduction to Replacement Theory, although I didn’t know that term back in 1999. In an interview with the Fort Other Americans whites and predicted that the others were on the way out:

We are millions. We just have to survive. We have an aging white America. They are not making babies. They are dying. It’s a matter of time. The explosion is in our population.

The AP Explainer somehow missed all this.

He was too busy quoting a “senior research fellow” from the Anti-Defamation League (ADL) who was railing about a mainstreamed view that “baselessly” suggests that Democrats are encouraging immigration from south of the border to replace traditional Americans.

I assume he was talking about white and black Americans since black babies are hit hardest by the Left’s extreme abortion policies.

Two points on that: First, the ADL is a left-wing hate group that pushes Critical Race Theory on our schools in the form of a program called “No Place For Hate” that has been called pure CRT. Second, if Biden’s open borders are not meant to replace certain voters, can the ADL provide even one logical reason for open borders?

And how does he explain the comments of José Ángel Gutiérrez? Or Joe Biden, or Chuck Schumer, or Julian Castro, and so many other race-crazed leftists?

Blame it all on Tucker Carlson.

It’s a Democrat tradition.   Bill Clinton blamed the Oklahoma City bombing on Rush Limbaugh. You can read an entire chapter about that in a book I wrote with Cliff Kincaid entailed The Death of Talk Radio.

Video:  Tucker posted on May 19, 2022.  This video contains a montage of Democrats bragging about how they are replacing republican voters.

In this case, Tucker Carlson, who has been exposing the Democrats’ hypocrisy on Great Replacement Theory, got to be the piñata. I’ll note that Tucker and I are not always on the same page. However, it’s hard to critique him when he points out that Democrats have for years bragged about replacing voters. Their comments are easy to find so long as You Tube doesn’t take them down.

Then there’s this. The Explainer states the obvious, and then denies it.

Let me quote the entire sentence because it’s so juicy.

The attention paid by many Republican politicians to what they see as a leaky southern border along the United States has been interpreted, at least by some, as a nod to the concern of white people who worry about being “replaced.”

Excuse me! What they “see as a leaky southern border?” If quoting the ADL didn’t blow his credibility, this certainly did. If you’re in denial about Biden’s open borders, you might not be qualified as an explainer!

So allow me to explain to the Explainer:

“Great Replacement Theory” is not something Republicans made up out of thin air. It’s an active conspiracy that Democrats have been implementing for years. If they’d shut up bragging about it, perhaps no one but Tucker Carlson and me would notice.

Accept no replacements!  Not even if they’re great!